Word of the Day – “zwingen”

A fun look at the meaning of "zwingen" and what forcing someone has to do with "two". Also: loads of useful related words :) 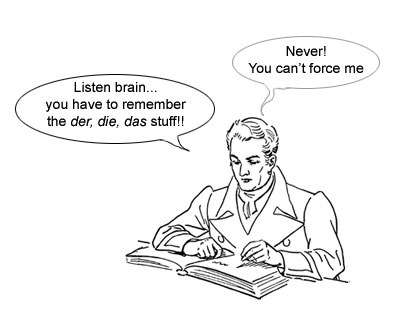 and welcome to our German word of the Day. This time we’ll have a look at the meaning of

Imagine a day in late spring. Sunny, balmy, a slight gentle breeze, the birds are singing. And all your friends including your new crush are going to have a BBQ at the lake at which your favorite band will play at sunset. For free. But… you have like the most important paper ever to hand in the next day and so far you’ve done:
nothing.
That’s when it’s time for zwingen.
And no, it does not mean “to screw the paper”. …

Zwingen is about making someone do something they don’t want to do. And not by subtle manipulation. So in one word… zwingen is to force.

I feel like zwingen is actually a little bit stronger than to force. Or maybe it’s just the sound of the word. Zwingen. Sounds like someone is pinching your arm.
And that’s actually kind of where the word comes from. The origin is a Germanic verb that was about the idea of compressing something by force. And wouldn’t that make a lot of sense if this verb was connected to the same ancient Indo-European root as the words zwei and two? Like… you pinch someone’s arm between your fingers? I mean, come on… how much sense would that make? Exactly… all the sense in the celestial sphere. Scientists will say it’s false, that the words are not related. But that’s just their opinion, man. This… this compulsion to be scientifically accurate … it is totally out of control. The word being related feels right, that’s what should matter, damn it.
Anyway, speaking of compulsion… that brings us right to the noun for zwingen– der Zwang.
Zwang is part of like a bazillion useful compounds and the translation depends on context but the idea is always that there is some form of forcing going on, either internal or external.

Those were but a few examples and there are lots of other Zwänge out there. There’s even one for German verbs … the Präfixversionszwang (the compulsion for prefixes :). That’s a super strong one and only few verbs are strong enough to resist it.
Zwingen is pretty strong though because there are only three versions. Aufzwingen is basically to force something onto someone, but it’s pretty rare.

Then there are erzwingen and bezwingen. The er-adds the usual idea of reaching something through the action. So it’s mostly a grammatical difference to zwingen.

And last but not least, we have bezwingen. The be- does a very vague intensifying here, and bezwingen basically means to subdue. So it’s kind of a general once-and-for-all-zwingen if that makes sense.

All right.
So, I’d actually say that’s enough for one day. We’ve covered everything and our heads are filled with plenty of examp… oh… what’s that… there’s another word running toward us. I hope it doesn’t want to get in on this post… oh… oh no, it does want to get in. Hey… hey…

Too late, it squeezed itself in. Now you’re wondering what’s this stupidity about? Well, zwängen is an offspring of zwingenand Zwang and it’s about forcing something into a rather tight location. Like a verb squeezing itself into a post that’s already quite full ;).
Technically, zwängenis not a reflexive verb. So you can zwängensomething somewhere. A rock formation for instance can zwängen a creek into a narrow path or you can zwängen your belly into those pants that still totally fit.
But in practice, you’ll mostly see zwängen used with people squeezing themselves in somewhere.

Oh, and it doesn’t really work in abstract senses. So you can’t zwängen yourself into a certain job, for example. That would be another word. Wait… I can actually see it… it’s running toward us. But now we’re REALLY full. Quick, let’s wrap this up before it gets here :).
This was our look at the meaning of zwingen. It is absolutely NOT related to zweiand twobut thinking of it in terms of two fingers squeezing your arm helps a great deal to remember that it means to force, to coerce.
As always, if you have any questions or suggestions or if you want to try out some examples, just leave me a comment.
I hope you liked it and see you next time.

bezwingen – to defeat (sounds a bit pompous)
erzwingen – get by coersion