In this episode, we'll explore the word "spüren". We'll see where it comes from, what the difference is to "fühlen" and which nice related words there are. 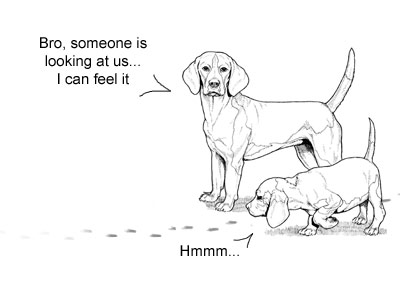 You might never have heard of it (because I made it up and it is nonsense) but experts usually classify German as a TOO-FAT language. That’s short for “there are other options for a thing” and unless you’re completely new to German, you most probably know the pain.
Spüren is a perfect example, because it is one of those “other options” for the idea of feeling/sensing. And of course it’s totally NOT synonymous with the main translation fühlen.
So today, we’ll look what kind of sensing spüren exactly is and what the difference is to fühlen.
And it’s actually a noun, that’ll get us on the right … ahem… Spur ;).

It all started with the super hyper ancient Indo-European root *sp(h)er(ə), which apparently was about the foot and its movements.
Now, the main purpose feet besides receiving massages is making steps. And unless you’re treading on rock you’ll probably leave a trace.
And that’s exactly the meaning the word die Spur took on very early on. First, it was used by hunters for literal animal foot prints, but it soon broadened to all kinds of traces.

Now, imagine you’re following the footprints of a wolf  in the snow. You basically follow a line, right.  So makes perfect sense Spur can also mean track, mainly in context of traffic.

Cool.
So Spur is all about tracking and tracing. And that’s also the idea of the verb spüren started out with. It quite literally meant to find traces and track them.
In fact, this is still super visible in the word Spürhund. A Spürhund is not a very emotional dog with a lot feelings. A Spürhund is a dog that sniffs out stuff.

Now, if you want to find traces and track stuff, you need to be quite attentive, observing and perceptive. And slowly the word spüren shifted toward a more general and “internal”  idea of “sensing, perceiving” and became what it is today.
But the original notion of tracking is still in there and it’s actually the main difference to fühlen.
Spüren is kind of targeted and looking for information.
Fühlen has more of an emotional component and it sounds more “whole”.
To make it really absinthe … uh… I mean abstract, fühlen is a cloud, a nebula, spüren is a sensor, a looking glass.
Let’s look at them back to back.

Here, the difference between the two is super clear.
The version with fühlen talks about how you feel as a person at the moment (you feel good). The version with spüren  is basically the equivalent of  “I can see myself in the reflection” or “I can hear myself snore.” for the sense of touch. Like… you can perceive your body well when you touch it.
But the difference isn’t always that big.

Those two are REALLY similar and they both mean

The difference is tone. The spüren-version  is the more common one and it sounds more like you’re having an abstract itch somewhere, an inkling. Like… I could imagine someone squinting their eyes a little for that sentence, like their trying to track down the cause.
The version with fühlen sounds softer, and at least to me, a bit esoteric. Like… you sense it, but not through one particular channel. It’s a holistic experience.
Hmm… not sure if that actually makes any sense. Let’s just look at some more examples …

So, to give you a rule of thumb:

Spüren is usually the right choice for tactile perception as well as all sorts of inklings. Think of a hunter tracking new information.

But of course German isn’t very consistent about it and the word for the antenna of a snail for instance is called Fühler. Even though Spürer would make more sense, based on what we’ve learned.
Now, what does Spürer mean instead?
Nothing :).
But spüren does have related words.
For example the adjective spürbar which means perceivable but it’s also commonly used for significantly.

Or the noun das Gespür which is sense, feeling in the sense of having a talent for something.

And last but not least, we have a couple of prefix verbs: verspüren and aufspüren. Verspüren is pretty much a synonym for spüren and it’s the more idiomatic choice in contexts of cravings or yearnings.

And aufspüren means something like to find after tracking down, so it’s pretty much the original spüren. It’s kind of rare though and I actually couldn’t aufspüren an example for it ;).

And that’s it for today. This was our look at t… oh hold on, there’s a call. Joana from Peru, welcome to the show.
“Hey Emanuel, I have a question if we still have time.”
Sure, sure, go ahead!
“Oh awesome.. so when you mentioned  die Spur, I immediately thought of the English to spur and I was trying to make a connection but I couldn’t think of anything. So are they actually related?”
Great observation! And I’m glad you’re bringing that up because the connection is actually kind of funny. Do you remember the original idea Spur came from?
“Uhmm…. it something with  foot, right.”
Exactly!! Now, there’s also the noun the spur.
“Like… spur of the moment?”
Yes, but that’s the abstract meaning. There’s actual a real world object called spur: that little metal thing riders sometimes have on their boots. So basically, on their feet. Hold on… here’s a pic… 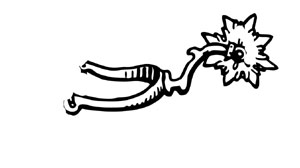 “Oh, those…”
The idea of these things is… you twitch your feet thereby pushing the spur into the horse’s side to make it run.
“Ohhhhhhh… the horse quite literally feels a spur. Or spürs a spur in German.”
Haha, yeah. And then, over time, the verb to spur just shifted toward the general idea of sudden “inspuration”. Oh while we’re at it… German actually also has a verb that’s based on the horse-spurs: anspornen. Which is a mix between cheering and motivating.

It’s a bit rare but I thought I’d mention it.
“Cool, thank you so much!! That was really interesting.”
Well, thank you for bringing that up.
And to all of you out there, thanks for tuning in. This was our little look at the verb spüren which evolved from tracing footprints to a general sense of tactile and intuitive perception.
As always, if you have any questions or suggestions about this, especially about the difference between spüren and fühlen, just leave me a comment.
I hope you liked it and see you next time.