The meaning of German “denn”

A fun look at the meaning of 'denn', the difference between 'denn' and 'weil' and the real reason why Germans love adding 'denn' to questions. 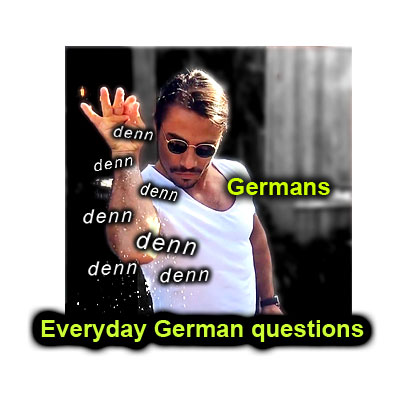 and welcome to our German Word of the Day.
And this time, we’re in for another one of those mysterious German particles that Germans are sprinkling all over the sentences, to give them “flavor”.
You know what I mean… those dochs and halts and jas and ebens.
And today, we’ll take a look at the meaning and use of

And we’ll start with a couple of quick fixed for common mistakes.
First of,there is a difference between German den and German denn and it matters! Denn is like the English word den, German den has a long, open “e”. Here they are.


So please try to practice this.

And then second, a quick note about denn and dann because people often mix them up.
300 years ago, denn and dann were pretty much synonyms. But just as their English brothers then and than diversified in meaning, so did the German denn and dann.
So is the difference between denn and dann the same as between then and than?
Of course not.
That would go against rule number 42 of the Manifestum of Languages…

42. The Confusion of the Learner must be achieved

Dann does NOT mean than and denn often DOESN’T translate to then.
I don’t want to talk about dann here so let’s just say dann  is essentially an answer to the question when?

Denn on the other hand cannot, under no circumstances ever, answer anything.
But it can do a lot of other things and we’ll clear them all up today.
So are you ready to jump in? Then let’s go…

Denn has three meanings; or better functions. There’s its normal day job as a translation for because. That pays the rent. Then, because denn has watched some motivational Youtube, it has a side hustle as a flavoring particle, and that’s actually going so great, it brings in more income (aka usage) than the “main” job.
And lastly, sometimes it has to help out its gym buddy als with the comparisons, but that’s negligeble.

We’ll actually focus on the “side hustle” because that’s the most common use and that’s what people are having problems with.
And if you’re now like “Wait, but I want to know how to use denn as because.”
Then no worries… I have a separate article about that, where we also take a detailed look at the difference between denn and weil.
In a nutshell, denn does NOT make the verb go to the end, it sounds a bit formal and is more common in writing, and the denn-sentence MUST come AFTER what it gives the reason for.

But yeah… if you want more details, here’s the link:

weil and denn – What’s the difference

But now, let’s take a look at how Germans use denn as a particle.

Just like doch or halt or schon, denn is also used as a flavoring particle. Here is an example from daily speech.

If you look at how denn is used here, you might notice one thing: it is only used in questions. And that’s no coincidence, because:

Denn as a flavoring particle DOES ONLY WORK IN questions!

But what exactly does it do?
Well, in many instances it is basically padding. Yup, padding. A “naked” question word would sound rather harsh.

To make this sound friendly you would need to lengthen it a lot while doing all kinds of turns with the melody… whaaaaaat? Both languages, English and German try to soften this by adding some filler like oh, and or was it or… denn.
Denn just makes you sound less harsh and it gives you more options to express your feelings with tone and melody.
It DOESN’T, as many sources online suggest, signal interest. I mean, come on people… it’s a question! “Denn signals interest.” is a lazy ass explanation.
What it really is is padding, an extra syllable that gives you room to express yourself tonally. You can make it sound annoyed, surprised, super curious, angry… whatever you want.

However, probably on account of its padding-power denn always sounds a bit casual. A detective would never ask the suspect where denn the money is because the padding-power of denn would take away the sharpness.
(Another argument against this “Signals interest”-nonsense, by the way. The detective is VERY interested in the answers, even without denn.)
Anyway, here’s a couple more examples…

As you can see, denn is not restricted to super short questions. Sure, these questions wouldn’t sound super harsh without denn.
I’d say in those examples denn gives the same flavor as an initial so does in English.
Sometimes it has a slight undertone of at least …

But those are nuances that you’ll pick up over time.
The important takeaway is that denn is used to “pad” questions and possibly give you some room for your intonation to show your mood, so go ahead and start adding it to questions. Just don’t overdo it. Like… having a denn in EVERY question would be too much :).
Cool!
Now, we’re almost done, but there’s one more thing I want to mention real quick.

One more thing I want to mention real quick

Geez headline, you had one job!! Do it again, and correct this time!

Contemporary German (hahaha… writing that was a real joy for some reason) uses the word als for unequal comparisons.

But a few hundred years ago, German actually used denn for this purpose. No idea why people switched to als at some point, but be that as it may,  there are two occasions in which denn is still used that way. The first is to avoid double als. As you know als itself has a LOT to do and means a LOT of things so sometimes this happens.

Here we have a comparing als and a whatever you want to call that –als. In spoken German, I think most people don’t bother and say als als but in writing the comparing als will be replaced by denn. I have to say though, that this sounds really high class already. Do it and your German teacher will be secretly impressed.

Alright… there is also one fixed expression that still uses denn to for comparison: denn je.

This doesn’t even work with als. Denn je is still quite common but it certainly sounds like very high German. So if you drop a denn je in a sentence people will be secretly impressed by your level of German.
But other than that I would not recommend to use denn as than in German. Sometimes it works and you may read it here and there but at the least you will sound like your are stage acting and in the worst case people will be confused because denn has other meanings that are more common. But denn je is than ever so go ahead and make some jaws drop.

And that’s it for today. Yeay!!
This was our look at the meaning and use of denn. We’ve learned that can mean weil, but it has different grammar and a different scope and so at least in spoken German the more common denn is the question padding.
If you want to check how much you remember, you can take the little quiz I have prepared for you.
And of course, if you have any questions or suggestions leave me a comment. I hope you enjoyed it.
Till next time.

The Box Model – An incredibly helpful perspective on sentence structure

denn vs weil – What’s the difference