What’s the difference – “denn” vs “weil”

"denn" and "weil" both mean "because". But their grammar is pretty different and understanding it can actually give us some deeper insights into German. 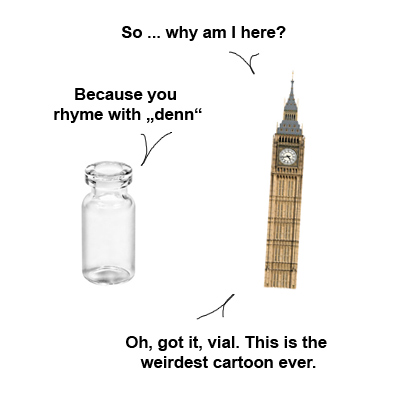 and welcome to our German Word of the Day.
And after the load of prefix verbs last week, today, we’ll do something a tiny bit more analytical.
Because today, we’ll talk a little about

The difference between weil and denn

Now, the OG readers among you might be like “Wait, I feel like you talked about that already.”
And indeed I did. I had a segment about it in the article that was dedicated to denn.
But that was a bit rushed and the article as a whole was kind of all over the place, so I decided to focus that one on the various uses of denn itself and make  weil vs denn into its own thing.

Because this topic actually gives us a quite interesting look at the scope of words and the hierarchy of clauses.
Yeah… I wouldn’t know what that means either, if I read it somewhere.
I’m just trying to make it sound intriguing and mysterious, because that creates attraction. That’s at least what my manliness coach says. But… uh… I guess saying that I have a manliness coach actually kind of ruins attraction.
I’ll have to ask him next session.
Anyway, if you want to check out the article on denn and see why Germans always add it to their questions, you can find it here:

The meanings of “denn”

And now let’s jump right in.

So, denn and weil are both words that introduce a sentence with a reason, so they’re both translations for because.
But they’re not just interchangeable, at least not without making “adjustments”.

Because they’re actually on three “dimensions”:

The difference in tone is that denn sounds a fair bit more formal and scripted and it’s much more common in written German. I mean, it’s not like people don’t use it in spoken German, but it’s just less common than weil and it kind of gives the whole conversation a serious tone.
Kind of like when you’re in the break room and you’re having fun and then the project manager comes in and reminds of you of the tight time line. Like… the fun level just drops a bit.

It’s the two other differences, though, that REALLY matter, so let’s take a closer look.

How does “weil” work

Obviously, the second one gives us the reason for the first one, but so far, this connection is not made explicit in language. There are several ways to do that and using because is one of them.

And what they do is they “mark” the sentence they’re in as a reason AND – and this is more important – they kind of package it up as a box (a side-sentence) that we can integrate into the other sentence.
It’s what I call the why-box – a box that contains the answer to why.
And just like we can move around other elements like the time-element for instance, we can move around the why-box and plug it in different slots.

And we can also use this box by itself to answer to a question.

Now, so far, this all also applies to German weil, but now comes the key difference.
And I’m sure most of you know what I mean. In English, the only difference between the bare sentence and the version that we packaged up as a why box was the word because.
In German however, all these “boxed” sentences (not just the why-boxes, but also when-boxes, where-boxes and so on), have a different sentence structure – ALL the verbs are at the end.
This is the normal sentence.

And here it is packaged up as a why-box:

And with this box we can do the same as in English, so we can put in into different slots (even more than in English)

And we can use it as a standalone answer to a why-question.

So weil packages up a sentence as a why box that gets INTEGRATED into another sentence, and in makes the verb go to the end because … German, that’s why!
Now let’s get to denn.

How does “denn” work

And denn is actually kind of like und, in that it “ties” a standalone sentence to another one. The only difference is that denn also marks its sentence as reason.
But that’s it.
It does NOT package it up and we CANNOT integrate the sentence into another one. And it does NOT make the verb move. In fact, in terms of structure it behaves like it’s not even there.

Now you might be like “Wait, that looks exactly like in English… I’m going to use denn a lot.”
But that’s really only on the surface and it’s super deceiving.
The denn-sentence is NOT integrated into the other one. The two are on the same level and the denn just ties the second one to the first as a reason.
We cannot move the denn-sentence around.

This makes zero sense in German. Like, for real… a native speaker might not understand what you’re trying to say.
And we can also not use denn-sentences as a direct answer.

This is understandable but it sounds SUPER strange.

Maybe it helps to think of denn as “And the reason for that is: …”

Okay, this was a little over the top, but yeah, denn works NOTHING like because and weil is the real match, even with the whole verb at the end stuff.

Cool.
Let’s round everything up again for a quick recap.

The difference in Scope

And that’s actually the result of the difference in grammar.

We have three parts here:

But actually, if you look closer, you’ll realize that it’s not clear what the because-part is actually referring to.

Here’s how these would look as hierarchies:

If you’re starting to get bored or confused… me too. You don’t really have to remember this last bit. The only thing that matters here is that this is what I mean by “scope”.
If we only have two “parts” then it’s easy, but in more complex sentences with several integrated sentences, it is not always clear what the because-sentence is referring to – or in other words, what its scope is.

This is exactly the same for weil, because as we’ve learned, weil and because are the same in terms of function.
But it’s NOT the same for denn.
Why not?
Because denn does NOT integrate a sentence into another one. It just ties it behind. So a denn-sentence is ALWAYS a top-level sentence and so it can ONLY refer to other top level sentences.

So if you were wondering when you’d even ever use denn – here’s an example. denn comes in handy when you have a more complex sentence because for a weil-sentence, it’s not always clear where it is integrated and what it is referring to.
And denn sentence is ALWAYS a top-level sentence and refers to the main sentence.

This is nothing you have to worry about in daily life though.
Honestly, in daily life, my recommendation is to just stick with weil and be done with it.
And if you’re struggling with this whole verb at the end thing – well, in spoken German, people often don’t do that themselves.
But that’s a story for another day :)

And with that, we’ll wrap it up for today.
This was our look at the 3 ways weil and denn are different and why weil really is the better match to because.

I actually wanted to have a quiz here, but I completely forgot to prepare it before posting, so it’s not here now. But I will add it next week.
Until then,  if you have any questions or suggestions, just leave me a comment.
I hope you liked it and see you next time.