In this article, we'll explore where German separable prefix verbs come from and meet their English cousin that has been hidden in plain sight. 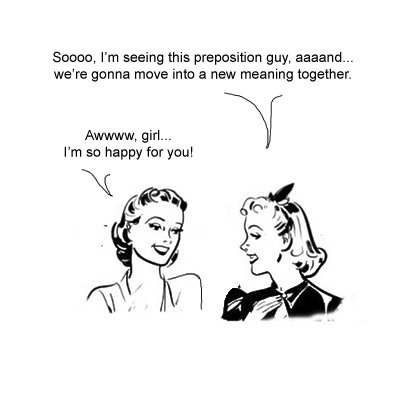 and welcome to the second part of our look at

The Function of Prefixes

In part one (click here if you haven’t read it yet), we learned that unlike the bill of rights, vodka, Buddhism and soccer, prefix verbs are not a German invention. Leave a comment if you just felt triggered XD.

The concept of adding a syllable to the beginning of a verb already existed in Indo-European and just like the idea of ending, adding a prefix became one of the core features of the language family.
That’s why most European languages don’t merely have prefix verbs – they’re actually rife with them. Yes, including English.
And while there’s a wide variety of prefixes and meanings, they all share a common theme :

They add a notion of end point or direction to a verb.

What we’ll do today – and in part three, because I’m totes gonna makes this a trilogy now – we’ll look at prefix verbs across languages, see how they work, how they evolved and if we can find this grand theme in them.
And what I said last time still holds. The goal of this is not to learn lots of German prefix verbs or get a secret hack to guessing their meanings. The goal is to get a deeper understanding of them so they’re less scary and less confusing.
And today, we’ll focus on what might be the weirdest kinds of prefix verbs… the German separable prefix verbs.
So are you ready for some mind-blowing insights?
Then let’s jump right in.

Those are probably the ones that German learners think of when they hear prefix verb. And they’re actually kind of unusual, if we compare them to prefix verbs in other languages.
The first unusual thing is that the separable prefixes are actually words that can stand on their own.
One big group are the “basic” prepositions like aus, ein or um but there are also lots of adverbs like weg, hin, zusammen or the various r-versions like raus or rein.
What they all have in common is some sense of direction or end point  and so they lend themselves perfectly to be used in the prefix-spot that the Indo-Europeans kind of established.
Some of the resulting words are really straightforward and literal – like wegnehmen (take away) or rausgehen (go outside), for example.
Others, like abnehmen (to lose weight), anmachen (to turn on) or aufgeben (to give up) are a bit more abstract. And some of them, like aufhören (to stop)… well… don’t make any sense.
But that’s to be expected. Many of them have been around for more than a thousand years so there was plenty of time for meanings to evolve.
So far, so good. English actually also occasionally uses prepositions as verb prefixes as we can see with verbs like to overcome or to bypass.
But German does something really weird. It splits the prefix off again and moves it far away to the end of a sentence. Many German learners find that really strange when they find out about this and it takes a lot of time to get used to it.
But the weird thing is, at least people who speak English fairly well already ARE used to it. They just don’t realize it.
You see, if we forget about the whole notion of a separable prefix that gets moved to the end and just look at the sentences as they are, we’ll find a really striking resemblance with a very common English structure… phrasal verbs.

The structures are exactly the same, actually. We have a verb and a little word at the end that adds an abstract notion of direction or end point.
The difference lies in how the languages “perceive” these structures.
English calls them phrasal verbs and keeps the order of elements – so the verb comes first and then, either directly or with an object squeezed in between, comes the little modifier.

German on the other hand feels a stronger connection between verb and modfier, puts the modifier first, writes them together and calls them prefix verbs.

And the crazy part is that it makes a lot of sense for German to do that.
Because it’s actually pretty consistent with a fundamental feature of German: the fact that German is a head-final language.

Those of you, who have read my articles on word order or on the position of nicht might already know this.
Head final means that the defining part of a phrase comes at the end with all the modifiers and specifiers coming BEFORE it.
One example where this plays a role are nouns. And there, German and English actually work the same while French for example takes the other approach and puts the head first.

Geez, French… licorn?!?! Are you for real? It’s a horse with ONE HORN. That’s what makes it, that’s what the name is. I mean… licorn… come on!
Anyway, nouns – or noun phrases we should say – are not the only part of language where this notion of head applies. The other one is verbs, or actions.

The head is the verb to go and it’s specified by to the beach. And as we can see, this time, English uses a head first approach.
The same thing in German looks like this

German uses head-final also for its verbs. And that brings us right back to phrasal verbs and prefix verbs.

One of you suggested in the comments last time, that it might actually be helpful for English speakers to think of them as joinable phrasal verbs instead of separable prefix verbs. And that makes a lot of sense, because as we’ve seen they’re kind of the same thing – just treated with a different paradigm; the head-final approach in German, because German is a big big fan of that. And the head-first approach in English.
That’s why German doesn’t really have phrasal verbs while English doesn’t have separable prefixes.
But we’ve also seen that head-final is no foreign concept to English. And what both languages have in common are verbs like the English overcome or the German übertreiben (to exaggerate) where the formerly independent word actually got stuck at the beginning and became a proper prefix.

We can think of these as the next step. It’s a bit like relationships, actually. From getting to know each other and maybe casual dating, to commited relationship to finally moving in together and marriage. And children, if there are any related nouns.
And in fact, English offers a really really great example where we can see all three steps side by side… the combination of to run and over.

First, we have a classic combination of a verb with a prepositional phrase as a direction.
The next step is the phrasal verb to run so/sth over, with its own clearly defined meaning. And while the meaning makes a lot of sense once you know it, it’s is NOT really obvious and kind of hard to guess if you don’t have any context. Much like German separable prefix verbs; though those are worse, I have to admit.
And then, step three is the non-separable prefix verb to overrun. Again, the core ideas of the parts are still there, but the resulting meaning is more than the sum of the parts.
All right.
Now, there’s actually another possible step in this evolution of prefix verbs, that we can also see in many relationships.
No, I don’t mean divorce. Prefix verbs usually don’t do that.
I mean self-abandonment.
Gee, it’s kind of depressing to look at it that way, but that’s not what happened to those weird prefixes like verstehen or bestellen, it’s actually the stage of all the prefix verbs that European languages got from Latin.
And that’s what we’ll talk about in the third an final part of this mini series.

As usual, if you have any questions or thoughts about any of what we’ve talked about today, just leave me a comment.
I hope you liked it and see you next time :).