If you think the verb "regen" has something to do with "rain", then this post is for you. Today, we'll learn all about it and all its useful prefix versions. 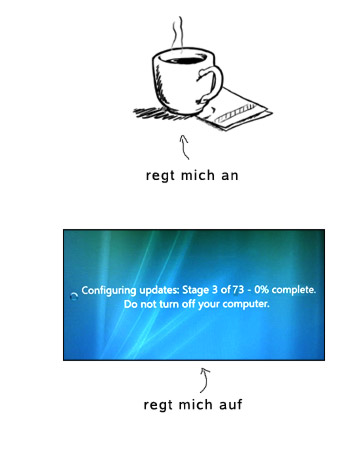 Now you’re like “Hey, we know that! That means rain.” but what you mean is the noun der Regen. We will talk about the verb regen.
“But doesn’t that just mean to rain?”
No, that would be regnen with an extra “n”.

Regen the verb doesn’t have much to do with water falling from the sky. The origin is not entirely known but it might be related to rock as in Rock’n Roll. That would make sense, because regen is about movement. A movement slowly starting, to be precise. Think of an elephant who’s just waking up from its afternoon nap and starts moving and stretching its limbs and body. This would be regen. Actually, it would be sich regen because regen comes with a pointless self reference.

here it is in practice.

Note that regen is NOT about travelling in any way. It’s about movements on the spot, if you will.

And in fact, the verb itself is pretty much only used in an abstract sense of some sort of desire or opposition starting to grow or show or whatever.

And if you’re now like “Hmm… that doesn’t seem like it’s all that useful” then let me tell you this:
You’re correct.
Regen – the verb – is about as useful if you want to speak German, as Regen – the noun – is if  you want to watch Game of Thrones. It’s nice to have it but it doesn’t really make a difference.
But like all German verbs regen has prefix versions – and those are extra useful.

The prefix versions of regen

Regen doesn’t have many prefix versions. Only 19.
Nah, kidding. Only four. But boy, are they useful. We’ve learned that regen is about the idea of getting into motion but we’ve seen that it’s mostly used in an abstract sense. The prefix verbs are abstract, too. Their focus is not motion but the more general idea of agitation; some sort of rise in energy level. That’s the core of three of the prefix versions… erregen, anregen and aufregen. And they all have their own take on it.

Erregen has an interesting double meaning.

I think you got the idea. Just think of erregen as to arouse. It’s not automatically sexual but whenever it feels like it does have the adult meaning… erregen probably does too in that context.
All right.
The next one is anregen. The best translation for that is to stimulate, but unlike erregen, anregen is never nervous and it doesn’t sound sexual at all. It’s a positive, G-rated stimulation. Like … a good discussion with a friend can be anregend. Or a bubble bath with herb scents.

There’s also the pretty common noun die Anregung  which means something like idea, inspiration, suggestion. Something that gets someone else’s brain or imagination going… strictly non sexual, that is.

Cool.
The last one of the three, (sich) aufregen. The related words, namely the noun die Aufregung and the ge-form aufgeregt are all about general excitement or nervousness.

Now, it is important to note that these aufregen-words DO NOT have the same vibe as excited or exciting.

Aufgeregt and Aufregung are MUCH more nervous and much less euphoric than excited.
And that brings us to the verb aufregen itself, which is actually not positive at all.  Aufregen (or sich aufregen) is super uber common and means to get worked up about something, but also to bitch or to rant.

And aufregen brings us right the last regen-verb: abregen. Well… sich abregen. God, these self references. So annoying. Anyway,  sich abregen is the perfect word if someone is ranting in front of you and you want to tell them to calm down.

And that’s it for today. This was our look at the meaning of  regen. The verb itself is about motion or agitation but the real takeaway are the prefix versions. Erregen, anregen, aufregen and abregen… they’re all super useful and you’ll definitely hear all of them in people’s daily talk.
As always, if you have any questions or suggestions or if you want to try out some examples just leave me a comment.
I hope you liked it and see you next time.

(sich) aufregen  – to get worked up about something, to be angry, to rant and rave
aufgeregt – excited, nervous (NOT the same vibe as the super positive “excited”)
die Aufregung – the agitation, the commotion