Word of the Day – “überlegen”

A fun look at the meaning of "überlegen", the surprising logic behind the meaning and the difference to "nachdenken". 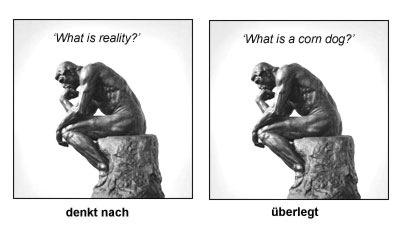 and welcome to our German Word of the Day. This time we’ll look at the meaning of

Überlegen is a fairly important word that you get to hear often in daily conversation. And yet, it kind of flies under the radar of many learners of German. Because for each of its three meanings, there’s another, more “obvious” translation.
Oh and yes, I just said three meanings. But don’t worry, they’re all kind of about thought in a way. It can be to ponder, to decide and to make up.
But we can’t just plug in überlegen as a synonym because of its slightly complicated grammar.
Yeah, I know you’re now like “Wow, that’s gonna be my new favorite word… NOT.”
But seriously… people use überlegen a lot and it’ll make you sound much more like a native speaker, so let’s have a look at what it means and how to use it.

Überlegen consist of two parts – the basic verb legen and the prefix über. Legen basically means to lay (or to put, in a broader sense) and the prefix über carries the idea of above.
So if we take it literally, we get something like laying, putting over.
And indeed, überlegen can mean that.

As you can see, the prefix is at the end here, so it’s a separable verb. This use super rare though and you can trust me that you won’t need this one.
What we need is the inseparable überlegen. And the big, overarching theme that all the translations have in common is

Now you’re probably like “What the hell… how does that tie in with laying over?”
And that’s an excellent question, that actually got nominated for the “Outstanding Questions Award 2020”.
It won’t win though, because all we need to answer it is the verb to cover.
You see, covering is kind of laying something over, right?
But covering is also used in context with topics for example. And when you cover a topic, what do you cover it with?
Exactly, with thoughts. Tadah!
So it makes perfect sense that überlegen is about thinking. Or.. maybe not perfect sense, but at least it’s not super random crazy.
Anyway, so now that we have the basic theme, let’s get to the actual uses and translations and there, we can distinguish between a bare überlegen on the one hand and sichüberlegen with a serving of self reference – for extra complication :).
Let’s start with the bare one.

Überlegen without anything (nerds would call it intransitive), means to think.
It’s not as broad as to think, though.
Überlegen is NOT the philosophical kind of thinking. That would be denken.

And überlegenis also NOT to think as in to believeor to reckon.Once again, denken or, maybe even better, glauben are the words you need.

So what kind of thinking IS überlegen?
It is to think in a sense of searching your mind for a result.

Now some of you may be like “But Emanuel, what about nachdenken?”
And indeed, überlegenand nachdenken are fairly close in meaning.

These are wrong and they sound really really bad with überlegen.
And here are a few examples where überlegen is prefect… it’s basically actions, particularly questions.

And this leads us to the second difference between nachdenken and überlegen.
We could call it the goal or the scope.
Überlegen pretty much always deals with one specific everyday question. Nachdenken on the other hand works for the “bigger” questions, too, and it can be less goal oriented than überlegen.
You cannot really überlegen “What is the purpose of our existence?” and you wouldn’t say you spent 4 hours in your chair with überlegen.

With überlegen, that sounds a bit odd. Like you have a bad memory and you spend a lot of time trying to find things in it.
Generally, we could say that überlegen is limited to mundane everyday questions.
But that doesn’t mean that it’s not common.
Quite the opposite as you can see here:

As you can see, überlegenis clearly a word worth adding to your active vocabulary.
To be fair though, more then half of the überlegens are probably on account of the other überlegen… the one with the self-referential one.
So let’s talk about that next.

And actually, this headline would be more helpful if it were mir überlegen, because the self reference with überlegen is in DATIVE. It is to oneself rather than oneself.

So the person is the receiver of their own überlegen, NOT the topic. Think of it as the same concept like in to buy (oneself).

And what does überlegen mean in the second sentence?
Well, it’s quite similar to the überlegen we already know, the thinking-one. Only that this time, the focus is not on the process, but on the result of the thinking. Which can be for instance a decision. That’s why it can mean to decide and that also gives us the difference to entscheiden, which also means to decide.
Sich überlegen kind of inlcudes the thought process, while entscheiden is purely focused on the result and can be done on a whim.
Here are some examples.

The last example is kind of hard to translate without losing the tone. The German version sounds doesn’t sound pushy or offensive at all. It’s kind of nice and inviting actually.
Anyway … to decideis actually not the only translation for sich überlegen.
Another goal of thinking can be to come up something new.
And so it makes perfect sense that sich überlegen can also mean to come up with stuff.

Actually, let’s look at überlegen and sich überlegen back to back and see how the focus shifts from process to result.

So in the first example the speaker wants the other person to think about the whole scenario for a second (not for day, that would be nachdenken then), while in the second dialog, the person wants a decision.

I’m sure some of you feel a little anxious right now by all this grammar and the nuances. You probably will forget most of the details like one hour after reading this. But that’s okay! You will encounter it in daily life and then you’ll be like “Hey, I think I understand.”
What really matters is that you remember that (sich) überlegen is about a thought process in daily life… sometimes just the thinking, sometimes with a decision or idea. But the base is always the same.

Cool.
Now, before we wrap up, let’s quickly mention that überlegen can also be an adjective at times. Then, it means superior.

And of course, as any language that is spoken by real people, we do have more superior in German. It is used very often in context of sports.

Some people say that the comparative überlegendershouldn’t be a thing, and the same goes for more superior. But I don’t really have an opinion about that
(pssst… I actually do, I think it’s fine, but I can’t say that because I’m a “teacher”;))

Cool… now, let me überlegenif that is all… hmmmm… yes, I think it is. So we’re done for today. This was our word of the day überlegen. It is thinking about the everyday questions of life and when you add a mir or dir or that kind of stuff, it turns into decide or come up with.It is a word you’ll definitely hear people say. Should you use it too? Well, überleg’s dir :).
If you have questions or suggestions just leave me a comment. I hope you liked it and see you next time.

Word of the Day – “nachdenken”

This entry was posted in A-Level, German Prefix Verbs, Must have words, Prefix Verbs Explained, Verbs, What is the Difference. Bookmark the permalink.
Subscribe
82 Comments
Oldest
Newest
Inline Feedbacks
View all comments