Word of the Day – “gelingen”

A quick look at the meaning of "gelingen" and how it is different to "schaffen". Also, a really really weird ending. 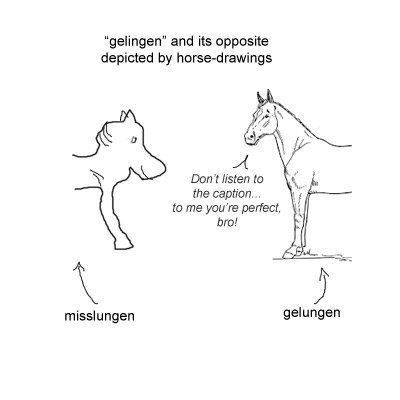 and welcome to our German Word of the Day. And today, we’ll take a look at the meaning of

Gelingen is one of those weird words many of you have probably missed for some reason, even though it is quite useful and common.
And it’s one of those verbs that have ge- as an actual non-separable prefix, not just a past marker.
And if you’re now like
“We DO NOT know what you’re talking about, Emanuel, this is advanced stuff….”
let me tell you that you, all of you, know at least one other example for these kinds of verbs… gefallen :).
The two actually kind of fit together, both grammatically and thematically… something that mir gelingen will probably dir gefallen.
But I’m getting ahead of myself …

The origin is the allegedly ancient Indo-European root *legu̯h-. This root expressed the idea of light in weight and it’s not only the origin of light and the German leicht, but of the name for the lung (die Lunge), which literally meant something like the light one.
Now, many of you probably know that German leicht is not only the word for light in weight, but also for easy (light in required effort).
And that’s the key to the meaning of gelingen. Back over a thousand years ago, there was a verb lingen, which basically expressed the idea of “can be done easily”.

Back then, the ge-prefix was still a regular prefix like be- or ver- and the idea it expressed was that of completion. I’ll talk more about that in the book on German prefixes that I’ve been about to finish for years now. This book definitely can’t be done easily :).
But yeah, so while lingen itself was more about an easy process, the prefix version gelingen was focused on the result.
Now, anyone who has a team, or contractors, or kids, or a partner or flatmates will know that, just because something is easy to do that doesn’t mean that it’ll be done well.
But there’s at least a loose correlation, and so it makes sense that the result focused gelingen soon shifted toward the meaning to turn out well, be a success. And while its prefix-less brother lingen completely disappeared, gelingen is still in use and basically hasn’t changed the meaning at all.

Few things to note here. First up… the pun in the first example. Hacks… onions… it’s hilarious.
Then, in the second example, we can see that the spoken past of gelingen is formed with sein and gelungen.
And then, in neither of these examples do we have the people (who are) actually doing the stuff.
If we want to include them actually doing the stuff, we make them the indirect object with the Dative case.

Note the role flip? Instead of saying “I succeed at something”, in German you kind of say “something succeeds to me”.
I am making an onion soup, the onion soup “succeeds” to me.
We are negotiating a cleaning schedule, the cleaning schedule “succeeds” to us.
So yeah, gelingen can be a translation for to succeed BUT… it is the PROJECT that does the gelingen, not the person doing the project.
Let’s look at a few more examples, so you can get a feel for it…

Now, if you’re now wondering if that isn’t really similar to schaffen, then you can give yourself a pat on the back… because you’re spot on. Schaffen is kind of the mirror version of gelingen…

In fact, we could rewrite all the examples we just had with schaffen and the message wouldn’t change.
Here’s a back to back comparison of two of them…

If you want, you can try the other two. But beware… dig too deep and you might wake up something you’d rather have dormant. A question. A question about… es. Dun dunn dunnnnn!!
Anyway… in daily life, for the everyday challenges, schaffen is definitely more common. Gelingen is nice if you want to use more “refined” language. But it’s worth giving it a try every now and then, because it’s more common than you think.
Cool.
Now of course, let’s give the related words a quick mention. First up, we have the ge-form gelungen, which can be used as a slightly posh sounding adjective for well made/good.

Then, there’s the noun das Gelingen, which is the success, in the sense of successfully doing something.

But the one that’s REALLY useful is the verb misslingen. The grammar and phrasing is the exact same as for gelingen, and I think you can guess what this means… to turn out a failure.

And that’s it for t… oh, hold on… I see we have a call…. Chia-Jung, from Taiwan, welcome to the show.
“Hi Emanuel, I have a quick question… I hope I’m not too late.”
No, no, don’t worry, go ahead.
“So, could you tell us the preterit of gelingen with an example? I use that for my flashcards.”
Oh… of course, I’m sorry I forgot. It’s gelang….

“Uh… wait… gelang or gelangen, I feel like I’ve seen both. “
Haha…yeah, gelangen is also a thing. But that is a separate verb. It’s about the notion of getting somewhere, reaching a location.
“Ohhhhh… is that like longing combined with the notion of completion that ge- used to have.”
Uh… yeah, you’re spot on!! I couldn’t have explained it better.
“I know. I know a lot about you, Emanuel.”
Wait… this voice… Cuddle-Fur the Third, is that you?
“Yes. And I’m coming for you, Emanuel. You left me in the woods to die, just because I am a talking cat. Now I’m back to take my revenge. I’ll take over your show, then your girl and then your life… *hangs up”
That’ll never gelingen to you, you demon. Do you hear me? Never.
Ugh… this cat. So spiteful.
Anyways, that’s it for today folks. This was our look at the word gelingen and even though the ending was a bit misslungen, I hope you had fun and learned a bit.
As usual, if you want to check how much you remember, you can take the little quiz we have prepared for you.
And of course, if you have any questions or suggestions just leave me a comment.
I hope you liked it and see you next time.