A fun look at the word "lauter", why it is much more than just "louder" and what cool things we can do with it. 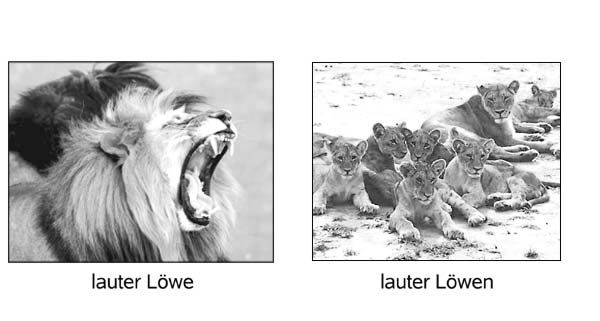 and welcome to our German Word of the Day. This time, we will have a look at the meanings of:

If someone had told me a week ago, “Hey Emanuel, instead of writing about the cases next, why don’t you talk about the word
lauter?
” , I would have probably said: ” …. lauter really ???… it is just louder, what’s there to talk about?”
At first sight, lauter really doesn’t seem to be a very interesting word as it is just an amplified laut if you will. And laut itself … well it would probably be enough material to write about … and it would give me the chance to make an INCREDIBLE funny Fat Boy Slim reference…
“Write about laut, my funk soul brother” … but then again, it is not that interesting. And lauter… well there are definitely more important word to write about… that’s what I thought.
But then, I had a dream…. I still remember it perfectly… (cliché harp arpeggio up)
I am somewhere at some point in time with some people some of which are somewhat similar to some of my colleagues. We are all doing something somewhat boring… and then for some reason I say “Hey guys, what does Lauterkeit mean in English.” Nobody really knows and we start to think about Lauterkeit. Then we pull over our convertible because the talking cat has to vomit … again… (cliché harp arpeggio down)
I woke up and I realized the full scope of the word lauter and I knew… that is what I want to write about next so here … oh… I see we have a call already .. Marc from Montreal Canada, hi Marc:
“Hi Emanuel… sorry to interrupt….”
No problem man, how can I help you?
” I… kinda didn’t get that funny reference you made.”
Well… it’s a song… look Marc uhm… I uh… I can’t really explain it right now, as it would take quite a while to give you the necessary background information to fully comprehend the complex layers of that joke.
“Oh damn too bad… I bet it was genious. ”
Yeah uh… it was indeed. Try to find something on the web.
“Will do… bye…”
Bye Marc… So where were we.. ah yeah, so I had this dream and I knew I want to write about lauter because in fact it is a little gem. It has 3 meanings that are seemingly not related but then again they kind of are…

In grammar jargon, lauter is the comparative degree of the adjective laut. Laut obviously is related to the word loud. Their common root is a word like hlut, that literally meant “heard” but was to a degree also used in sense of prominent or famous… makes sense after all.
The German laut is a bit more broad than the English loud as it also means noisy.

There is also the noun der Laut. Der Laut is basically the sound… as in A sound or A noise.

Der Laut is NOT the general sound:

Now before we go back to lauter… there is one more meaning of laut: according to.

It kind of makes sense. Saying laut is kind of like turning up the volume of the study to hear what they say. Sentences with this laut have a kind of formal news speech touch to themselves though, so this is nothing you need in every day conversation.
There is a fair amount of words in German that are based on laut. Lauten is a verb that is kind of hard to translate… think of it as to be in the audio or text domain… . Examples?

Lauten does not talk about how something sounds… it talks about what something IS. But of course a car cannot lauten green, because that is not in the audio or text domain.
Another verb based on laut is läuten. Läuten can mean to ring, so your phone can läuten or you can läuten at a door but I actually think that klingeln is the better word. At least if the sound is rather high. So läuten is adequat for deep, powerful sounds and the best example are church bells… those do not klingeln, those läuten.

And then there is die Lautstärke, literally loudstrength, which is… the volume.
So … just as a recap… the first meaning of lauter is louder. Now let’s look at the other 2.

Other meanings of “lauter“

One of them is kind of rare and one is actually really useful. And what are we going to start with? With the rare one of course. This way you will be tired and bored when we get to the useful one and you will wind up not having learned anything and I will have wasted 20 minutes of your time.. guahahahahhaha… kidding… we’re doin’ the ancient rare one first because it will help us making sense of the other one, so my intentions are actually quite sincere.. now why is sincere in bold? Because it is the best translation for the second lauter. In dictionaries you can also find unsophisticated and pure, but sincere is the best one of the 3.
Now before we do some example there is one thing I feel like I should make clear:
the first lauter was just an amplified laut… or more generally, an adjective made MORE. The sincere-lauter however, is a BASIC form. What does that mean?
Well let’s look at the whole trio…

Now the same for lauter as in sincere… please ignore my rather contrived example here.

and here again in short:

Lauter-er…if you think that is confusing or hard to pronounce, then try to talk about A sincere guy.

Lauter-er-er… no doubt German has done it again and won the “What the fuck, they can’t be serious about that”-award (WTFTCBSAT-Award). Just because you love grammar so much here is the breakdown on this tripple-er madness:
Lauter (the basic word) + er (to make it “more”/comparative degree) + er (ending case 1 + indefinite article)

Anyway… so … lauter can mean sincere. It is really rare though and many… many as in 2… Germans I asked did not even know it. The only “everyday” chance to see it is unlauter… literally it would be not sincere or unsincere but it has a bit less gravity in practice as it is used in sense of unfair.

The origins of this lauter is a word like (h)luttar, which used to mean cleaned or, a bit more broad, clear or pure. This is why it was also used for gold…. lauteres Gold is pure gold. So a lauter person is a person who is honest, does not scheme, is not driven by greed and has some more good characteristics… bottom line… pure, clean, sinless.

Looking at the origins of laut / loud and lauter as in sincere we have (h)lut and hluttar… those do look damn familiar to me. However, the first one meant “heard” the second one cleaned. I couldn’t find any definite information as to whether the words are related or not. Either one can be traced back to Latin and Ancient Greek and even in those languages there is a fraking resemblence (the link is to a nice page where is asked about this) …. so personally I would say that there is indeed a relationship with something like “clear” as a core…. however, this is but speculation.
The sincere-lauter is not something you’ll ever need when you want to buy fruit or something but it it good to know anyway. And there are a number of words that are based on this lauter, which are fairly commonly used. One example is erläutern which means the same as erklären… to explain, clarify. As for nouns there is die Läuterung (the karthasis) and the word that started this whole article… die Lauterkeit (the sincerity, the integrity).

The really useful meaning of “lauter”

Even without translation this is pretty clear unless you REALLY have the case-article rules hardwired in your brain, this could very well mean:

But it’s not. That would be

and a German would NEVER confuse the 2. Here are 2 more examples, in which even loud doesn’t make any sense anymore.

Without knowing lauter, the sentence is quite hard to figure out. So what is this lauter ? Well it is basically the same lauter as the sincere one but is kind of frozen… frozen in time, because it means more pure that it does mean sincere, and frozen in grammar because it does something that you would want all adjectives to do… IGNORE ENDINGS. It is lauter Ideen, lauter Idioten, lauter Haare… and not the usual lauter-e/er/es/em/en crap. Lauter used to be an adjective but it froze and now it is an adverb… oh if only all adjectives could freez… life could be so easy :)… what’s that you say? The meaning? Ooooooh of course, I am sorry,so… originally the frozen lauter was used in sense of pure and over time it has evolved into some kind of a lot … let’s look at the examples again.

Some dictionaries might also suggest only as a translation, but that kind of doesn’t capture the spirit of lauter. If you have lauter something, that means that there are a lot of this, but not exclusively… and it is way less focussed on number as would be many. If you say lauter, it does NOT matter how many… if you say many, people might ask you what you mean by “many”. At the same time lauter can even sound more intense than just many.

This one does sound a bit dry and uninvolved.

This sounds way more involved and impressed than the first version. Lauter also has some notion of place to itself… if somewhere are lauter somethings, that means that you can see a “something” no matter where you look… there might be other things too but “something” is all over the place. So … based on this I think the best fit in English would actually be… everywhere.

Here, using everywhere as a translation doesn’t make sense or at least it doesn’t mean the same as the German sentence… here a lot, only or so many are adequate translations.

So.. I hope you get the … idea… haha… so funny. Lauter is used quite a lot I would say so here are some more examples.

So… I guess we made it. This was our Word of the Day lauter. It can mean louder, it can mean sincere or it can mean a lot of or so many… and, at least I think so, the common root of these 3 meanings is clear or pure. To wrap this up here is a stupid sentence, that cramps all 3 meanings together :).

If you have questions or suggestions, drop me a comment, if you want me to write shorter articles, or split them into parts, please let me know too… they are quite extended at times and might be too long to read on the bus or in your cubicle… where you shouldn’t read them anyway ;).
Hope you liked it and see you next time.