A fun look at the meaning "holen" and its many useful prefix versions and the secret connection between fetching, racing and shouting. 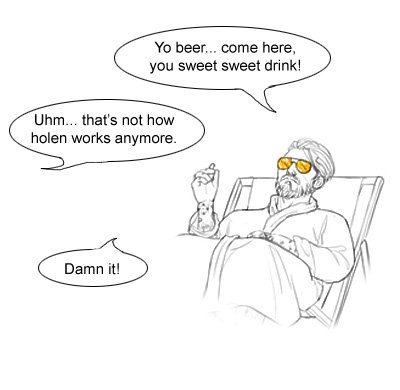 and welcome to our German Word of the Day, this time, we’ll take a look at the meaning of

Imagine you and a few people are at a friend’s place. You’re chatting and it’s great fun, but then you notice that your beer is empty. What’s the natural thing to do?
Exactly, you go home, do some Kundalini Yoga and then you go to bed in order to rise early and study. Or in one word: holen.

So wholesome.
Just kidding. Of course you’d go to the fridge and get another beer.
And THAT’S what holen is … to go get, to fetch.

Let’s look at some examples.

As you can see, holen is often translated as just to get and it can carry the idea of to buy but the core notion of fetching, going to get is pretty stable and clear, I think.
And that’s also the case for a whole bunch of prefix versions of holen.
First up, there’s a group, where the prefix basically adds a direction. R-version is the keyword here, for those of you who are regular readers and know I’m serious on the most important prefix verbs. :)

The idea of fapping might seem a bit weird at first but it actually makes a LOT of sense. It is a great stress relief and not only that. It can also make actual sex more enjoyable becau… oh, wait. That’s for my blog. I meant to say that the phrasing sich einen runterholen makes a lot of sense. Literally it means “to get yourself one down” … and that’s kind of what happens. The little friend is “up” and you bring him back down. The phrasing is pretty common and it’s also used in an abstract sense of being super proud of something and bragging about it.

That’s pretty colloquial though.
Anyway… let’s get to the “real” prefix versions, so the one that DON’T have an r.

And the first one is abholen which translates to to pick up.

The only difference to normal holen is that abholen has a strong emphasis on the notion of being awaited.
Cool.
Next up, we have nachholen. And this one has slight twist to the core idea of “holen”. Literally, it means to “after-get” or “get with a delay“. Do you have an idea where this is going? Nachholen is essentially what you do when you missed out on something but you still want it. Like… imagine you’re sick for a week and then you go back to your intensive German course. There will be a week’s load of material for you to nachholen.
The English phrase to catch up has a similar idea but the usage is completely different and in most of the cases, English would just express the nachholen with to get or to do.

Cool.
So… so far, everything was pretty clear, right? I mean, the core idea of getting, fetching is clear, there are loads of useful prefix versions that are also pretty clear… kind of a learner’s wet dream!
But a dream no less. With a sobering awakening.
For also holen has…
a crazy side .
Oh… I… I’m really sorry. I should have warned you that this is NSFW.
That was disgusting! Holen isn’t THAT bad.
Just a bit weird. So let’s take a look.

Down the rabbit holen

Two ducks are sitting at a lake. And they’re super bored, so they decide to make a race across the lake. One duck quickly takes the lead and looks like the sure winner. But then the other one gets a second wind, gains ground… I mean… water and eventually catches up and passes the first one…
Why are we talking about this, you ask?
Because we’d use not one, not two, but three holen-versions to tell this story in German: aufholen, einholen and überholen. Aufholen is about gaining on someone while being behind, einholen one includes the moment of actually catching up and überholen is to actually go in the lead, to overtake to pass.

And those are not the only weird meanings.
Überholen can actually also mean to overhaul, to give something a do-over.

Then, there’s the verb ausholen. Which is the word for what you do before striking. Like… you can ausholen with your hand as a threatening gesture or you can ausholen with a golf club. And the verb is also used figuratively in contexts of explanations … like… if you’re read a few articles here, you know exactly what it is because I’m kind of guilty of it sometimes… making a wiiiiide swing in the explanation ;).

And last but not least, there’s sich erholen, which is all about gaining back one’s strength and can translate to to relax as well as to recover.

Quite a crazy range of meanings, right?
When I first thought about this, I was actually quite confused. Like… I couldn’t really see how these verbs could possibly connect to the core idea of fetching, go and get.
So I did what I always do in these situations… go on social media and whine about how the German language is NOT fair.
Nah, kidding.
I go online and hole myself some intel about the word… you know, where it comes from and what relatives it has.

The surprising origins of holen

And I don’t know if you’ve noticed it, but we already saw an English cousin of holen – to haul.
We mentioned to overhaul but there’s also to haul off, apparently, which is exactly the same as ausholen… this act of preparing for a punch.
And there’s is keelhaul which is kielholen in German. Keelhauling means pulling someone on a rope along the bottom of a ship (the keel) from one side to the other and it was one of the most severe punishment you could get on ship. Of course, it’s out of date now, but it’s a great help for us. Because it’s a perfect example for the idea holen had a few centuries ago:


Ausholen (“to haul off”) got its meaning from the simple action of pulling back your hand before a strike. And overhauling was also first used on ships and it was about pulling the rigging of the sails apart for inspection.
And also the core notion of fetching kind of fits in with this idea of pulling. Pulling something means bringing it toward you and eventually getting it. So the holen we know today basically just shifted toward actually going there, instead of pulling.
But there’s actually another word that holen is most probably related to. A very very very common word… drum roll please.. hallo (and of course hello).
Yup, that’s right :).
One very early use of hallo (or variations) was to holler (another relative) at a ferryman to come get you over the river. Kind of like a one word version of:

The very origin of the family is most likely the mega ancient Indo-European root *kel(e) which was about shouting, sounding. The holen-branch very early on added a notion of bringing towards you and it eventually focused on this aspect and got a bit more active.
Makes sense. I mean… you can hollah at your beer all you want. It won’t come. If you want to have it, you actually gotta get up from the couch.
Now you might be like “But wait a minute, so there’s a connection to pulling and shouting. But… does that help us with aufholen or einholen or erholen?”
The answer is … well, kind of sort of, I guess… aufholen and einholen are kind of about decreasing the distance between you and something.
I mean, you’re going for something, kind of. You’re going in the direction of the person ahead, just like you’re going in the direction of a beer.

And for sich erholen… well… you’re kind of getting yourself back.
I know… this is probably not the most compelling “logic”, but if you manage to let go of all the specifics and think of holen as this REALLY vague idea of bringing toward you, then it makes at least a tiny little bit of sense :).
And if not, then don’t worry. The only purpose of making these connections is to help remember the words. If they don’t help, well, then just forget about them.
Don’t forget forget about the holen-verbs themselves though :). They’re all pretty useful.

And that’s it for today. As always, you can check what you’ve learned with this little quiz we have prepared. And of course, if you have any questions or thoughts just leave me a comment.
I hope you liked it and see you next time.

aufholen – catch up, gaining (in a sort of race, but NOT getting equal)
einholen – catch up and be equal(in a sort of race), also: to go shopping (regional)
ausholen – swing (in the sense of preparing for a blow), also: go on a tangent when telling a story
abholen – pick up, go and fetch something that’s waiting (packages, kids)
nachholen – do later what others already did (often used in context of school and missed classes)
der Nachholbedarf – need for catching up

sich erholen – to recover, to convalesce, to relax (general idea of getting back to shape)
die Erholung – the relaxation, the recovery

This entry was posted in B-Level, Must have words, Vocabulary. Bookmark the permalink.
Subscribe
87 Comments
Newest
Oldest
Inline Feedbacks
View all comments