Which case to use after “wegen”

What's the correct case after the German preposition "wegen"? Books, courses and smartypants teachers say it's Genitive, but reality has a different opinion. 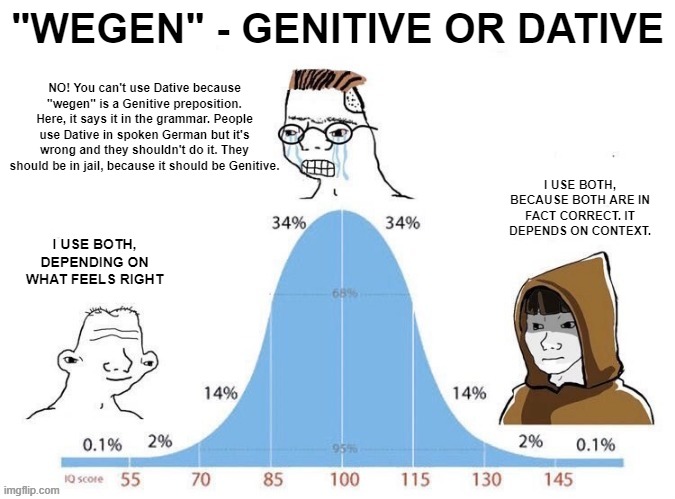 “The curious case of wegen”

day two of our Advent Calendar.
And today will certainly a bit controversial, because we’ll talk about one of the most classic points of debate about German grammar: the question of

Which case do we need with wegen?

Or actually, it is more that I’ll give you my opinion about it :).

You see, every now and then, I get a comment from one of you guys asking me about an example where I used wegen with the Dative instead of the Genitive. And it makes perfect sense that you ask because most learning material and also a fair number of sources for native speakers claim the following:

Genitive is the proper case.
Dative is wrong or at least colloquial and not to be written.

So why do I keep using the Dative? I mean, I should teach correct German, right?
Yes, absolutely. The thing is, pardon my French, je m’appelle Emanuel et je veux t’embr… oh wait, that’s actual French. What I meant to say was this in my opinion, this rule is crap.

And the reason is… reality.

I think you’ll have to spend quite some time looking until you find someone who actually uses version two in daily life.
Now you might like:
“But Emanuel, rules are important to keep a language consistent and just because lot of people do something a certain way, doesn’t make it right.”
Well, that is true for almost everything, but not for language. Language is maybe the most democratic thing on the planet. It IS what the majority does. Like..  if aliens landed in, say, Bielefeld and where to objectively study the German as it is spoken and written without checking rule books, it’s likely that they’d say something like
“What the hell is this crap. This verb at the end stuff is so confusing”
Seriously though, many sources do acknowledge that wegen is used with Dative in colloquial language.
But my REAL argument comes now:

I don’t think any of the wegen-with-genitive-acolytes, that so readily point out that “wegen dem Regen” is wrong, would even notice what happened in this sentence. Wegen is used with Dative. And NO ONE would EVER say that with Genitive.

That sounds like from a theater play.
So either, we need a rule like this: “Wegen is used with Genitive, except when we use it with a personal pronoun, then it comes with Dative.”
Or we just accept that either version is fine.Live and let live, so to speak.
Me personally, I’m for the latter, and I am pretty sure that you will encounter plenty of wegens with Dative if you come to Germany.

Now, I might have managed to convince you (not sure), but what about your teacher, who insists that it’s Genitive because ruuuules.
Well, no problem. There’s one Podcast called Belle Lettre and they guy makes a REALLY compelling case that not only is Dative not wrong, Dative is actually the PROPER case for wegen and Genitive is but a concoction of scholars who don’t know what they’re saying.
The guy has like level 100 in linguistics and level 200 in etymology (I’m like 10/15) so ALLY knows what he is talking about.
The video is 45 minutes long, the text can be read a bit more quickly. Here’s the link:

Now, the video is 45 minutes long (the text is a bit shorter) and it’s all in German, so you have to have a high nerd level to check this out.
But because it’s Advent I’ll summarize it for you real quick :). Here are his main points:

These are really just the main points. I mean, the video is 45 minutes, as I said. And of course that doesn’t mean that what he says is the end all be all.
But obviously a strong case can be made for wegen actually, by nature being a Dative preposition, so I think the easiest is just to … not worry about it. I mean, unless you’re a journalist ;).

And that’s it for today. What about you? Have you heard Dative with wegen? Have you ever been corrected? Can you follow my line of argument?
Let me know your thoughts in the comments.
Have a great day, and bis morgen :).

Oh, if you want to nerd out even more, here’s a scientific article about it… also in German:

Wegen – Dative or Genitive – A corpus based approach (pdf)