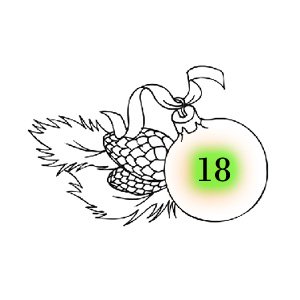 welcome back to the German learning Advent Calendar, door number 18. And behind this door is kind of a little add on to an article that’s already on the site. I’m talking about the article on

the particle halt and its use

Because there’s something missing, that I think is really important. The article itself is fairly old and it definitely needs an overhaul because it’s too long and spends too much time on the verb halten. I wanted to do the rewrite for the calendar but then work got in the way and I can’t possible do that at the moment. Still, I wanted to share the missing bit, because it’s quite common and it kind of shows a character trait of millenial Germans.

So, the general gist of the article on halt was, that it is kind of a verbal shrug. People use it whenever something is NOT the “most desired option” but an alternative. How exactly to translate it or if it even should be translated heavily depends on tone, but this notion of a verbal shrug fits pretty well.
Here are two examples, just so you can see it in practice.

Now, if you pay attention to Germans speaking you will notice that people, especially between 20 and 50, use halt a LOT. And not always is there an alternative setting, like an A or B thing, going on.
So what does the halt express in these cases?
At first, my interpretation was that people use it when they’re struggling to express themselves.

In that sense we actually do have an alternative. It’s the perfect way of expressing their thoughts. But they can’t do that, because they’re not Goethe, so they have to settle for the second best way. And halt kind of marks that in the sentence. Like… “This is kind of what I think, I don’t know how else to say it, though it’s not really precise.”
And based on that notion, we have a key to another trend that  I noticed. And this is what I want to eventually add to the article because it’s really important:

People use halt as an apologetic particle to subconsciously hedge their statements against direct confrontation.

Here’s an example… an employee complaining about having to do half an hour longer.

The translation of it is “I wanted to go home on time” … WITH a little verbal shrug in it. And what is that little verbal shrug doing there?
Well, to me (and I have paid a lot of attention to how people use halt) it feels a bit like the person is apologetic about wanting to go home on time. Not in a sense of really feeling sorry for it, but in a sense that they FEEL like they should apologize or justify themselves.
They’re saying their opinion, but they put something else in there. An apology or justification for their opinion, thus making it less exposed to direct confrontation.
Let me try to show you in English…

The first statement is a clear and upright statement. You stand up for what you want. The second version conveys the same message, but it’s hiding it. It’s weaseling around a bit, trying to avoid being confronted directly. A bit like

Now, I did not do scientific research on this. This is really just my observation over the years, but I do feel like that Germans have a tendency to avoid clear statements and really sticking up for their opinion. You will hear a LOT of halts when people complain about something. Some are because they don’t know how to express themselves, and some are adding a pinch of “apologetic-ness” into the statement.
And it’s not the only way Germans “hide” in their statements. I’ll talk about another BIG one next year. But I feel like there’s a trend of people not making clear bold statements and preferring to make it wishy washy in some way, hedging it. Having a backdoor.

It’s nothing people do conscioulsy or with bad intend. It’s just a mind set of the society or generation, or whatever. And it’s very subtle. But I have halt (being apologetic here :)) caught myself many times using halt or another option and then mentally saying the same thing again without it to see how it feels. And it feels different. It feels more exposed.

Cool.
I’ll rework the article about halt and add some more examples for all this, but for today that’s all I wanted to share.
But I am super curious what you think. Those of you who have spent some time in Germany, have you noticed any of this? Do you think there’s something to my theory?
And am I even making any sense?
Let me know all your thoughts and feedback in the comments. Have a great day and bis morgen :)