Word of the Day – “die Arbeit”

A fun look at the meaning and use of "Arbeit" and its surprising family connections that lead all the way from Oliver Twist to Wall-E. 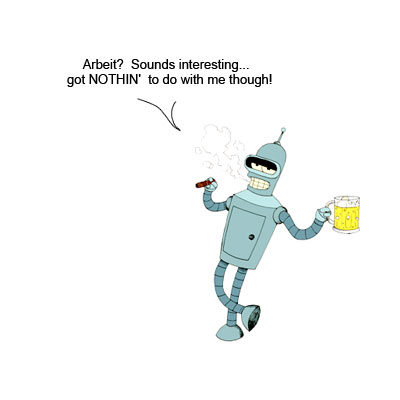 and welcome to our German word of the Day.
And today, we’ll take a look at one of the most defining words for German culture and society:

Nah, kidding. That’s the least defining word, of course.
The word we will talk about today is the perfect word for January, when all your resolutions of working hard and blah blah are still on. Because today, we’ll take a look at


And I’m pretty sure most of you know what it means, but what you probably don’t know is the crazy family relations it has.
So are you ready for some insights and some vocabulary?
Then let’s get to work.

So, die Arbeit is of course the German word for work. And the two words line up fairly well.

And as you can see, the two line up pretty well, but I’d say that  Arbeit leans a bit more toward labor. And that’s why it’s not idiomatic in context of a more divine or epic work, like the work of an artist or the work of unicorn. In these contexts, German tends to use das Werk.

In both examples, Arbeit would sound somewhat dry, like a job assignment.
If you want to find out more about Werk and its verb wirken, by the way, you can check out my article about them later. I’ll leave a link below.
Anyway, the verb for die Arbeit of course arbeiten,

And if you want to connect the thing you’re working on, you’d do that with an.

..and here we need to note that it ONLY means to work in the sense of… well… work.
So it does NOT work in contexts that are about something “functioning” or “working out”.

Here, the translation depends on the context and it could be funktionieren, or gehen or passen. But arbeiten sounds really out of place. Like “that” is new in your office and you already know that it’s lazy and it’s not going to do any work.
Cool.
Now of course like any hard working German verb, arbeiten also has a few prefix versions.
But most of them are somewhat clear at least when you see them in context

Those are not all of them and some of them have a second meaning, but hey… you can actually find them all in my awesome dictionary, if you want to dig a little more.
So instead of toiling over prefix versions, let’s get to what’s actually the most interesting … the origin.

The origin of Arbeit

Remember how I said that Arbeit leans toward labor? Well, that might because a few hundred years ago, Arbeit didn’t just “lean” toward labor – it literally meant hard, cumbersome labor.  While the English work could be used for a serf as well as for the court musician, Arbeit was only used for  like working a mine, tilling a field, working as builder… which essentially was the work of the majority of people, but ESPECIALLY of the lower end of society – the poor people, the serfs and the slaves.
In fact, the Old Slavic rabu, which is a relative of Arbeit, literally meant slave and rabota, which now means to work, meant to serve. That’s also where the word robot is from, by the way. I mean… Arbeit, robot…. they do sound kind of similar.

But now comes the crazy part. Because there’s one group of people which was especially prone to the fate of being a poor servant and having to drugde – orphans. I don’t know the numbers today, but I’m pretty sure, losing the father or not knowing him to begin  with was pretty darn common a thousand years ago, so this was a pretty big group.
And THAT’S actually the origin of Arbeit – the old Indo-European word *orbh-, which simply meant “without father”.  And yes, that IS where the English word orphan is from, so Arbeit and orphan are related.

Pretty crazy right?
But there’s more.
Because what happens if your parents pass, leaving you “without parents”? You get what they leave behind. Which in German is called … drumroll please…  erben.
Erben is the verb, das Erbe is the inheritance (or heritage) and der Erbe and die Erbin are the heir. And the verb for passing on something is vererben. And yes, all that also works in context of genetics.

And that’s pretty much it for today.
This was our look at German’s favorite word, the center of the German universe –  die Arbeit.
Here, have a couple of proverbs as a cool down:

Wait… the second one isn’t  a proverb, but more of a blueprint for the average conversation between two Germans. Sounds boring, is boring. But I feel like there’s a Haiku in there.
Anyway, I you want to work some more and see how much you remember, just take the little quiz I have prepared for you.
And of course, if you have any questions or suggestions about this article, just leave me a comment.
I hope you liked it and see you next time.

die Arbeit = the work
arbeiten = to work (NOT in the sense of “working out, being okay)
arbeitslos = unemployed
bearbeiten = modify through work, to edit (Works for material, as well as for works of art and especially for all things digital.)
nachbearbeiten = to do some post production (Usually in context of digital stuff)
mitarbeiten (an) = to co-work on something
einarbeiten = introduce someone to a new job; to work in something (An idea into a story for instance)
Mitarbeiter = the employee, the coworker
ausarbeiten = to flesh out (Make a rough draft into a detailed plan)
nacharbeiten = do work that should have been done earlier
überarbeiten = to rework (modify a piece of work); to overwork oneself (“sich+Acc überarbeiten” – only works reflexively in German, so you cannot overwork your staff)
überarbeitet = overworked
verarbeiten = to process (For material and data); to process, to digest (In a mental sense, for processing experiences or information)
die Verarbeitung = the production quality; the processing (Works for mental processing as well as for computers)
aufarbeiten = to “work the past (Do the work to understand and come to terms with something that happened in the past)
erarbeiten = to work out (In the sense of working out a plan, for example, NOT a plan working out!); to get through working (“sich+Dat etwas erarbeiten” – for instance a reputation or a mansion)
durcharbeiten = to work without a break; to work something through (A long document for example)
das Erbe = the inheritance, the heritage (For the family based thing, “die Erbschaft” is usually more common)
der Erbe = the heir (“die Erbin” for a woman)
erben = to inherit
vererben = to pass on
enterben = to disown (In the sense of not giving them inheritance)
die Erbschaft = the inheritance (Only in context of family, not for genetics)