“anyway” in German – The Exercise

There are five (main) ways of translating "anyway" in German. Today, we'll practice when to use which. 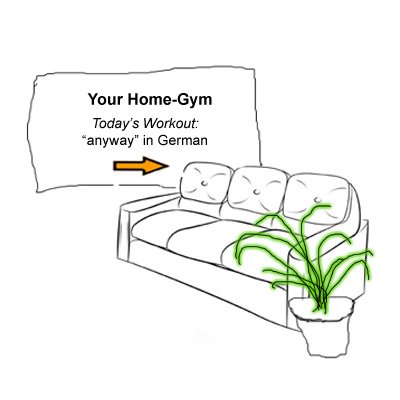 a little faster than usual, but many of us have to spend a lot of time at home, so I hurried a bit with the new post:).
A few days ago, we learned about the different ways to say

And today, it’s time for a little practice.
If you haven’t read the post or if you want to read it again, you can find it here.

How to say “anyway” in German

But I’ll give you a quick recap here, as well. And actually, I have to make some additions, because I completely forgot to mention a couple of distinct uses of anyway. So it’s actually five now, not three.
Or like the newpaper headline would be these days:

Learners increasingly worried as use cases of the English Anywayrus double within just a few days,
bringing the total up to 5.

What a crazy spring.
But we’ll get through this, and we can come out with much better German, so let’s jump right in.

Last week, we learned about three distinct functions of anyway.
The first one was to express a contradiction. The translation for it is trotzdem and we can spot it by replacing it with despite that without the meaning changing.

The second one, which we called “aligned-anyway”, expresses that something kind of fits or matches with what has been said before. Or at least it doesn’t clash.

I couldn’t think of a good test last time, but some of you actually found one and put it in the comments. It’s to try and replace anyway with already. The meaning is not exactly the same, but if the sentence still has a similar sense, then you’re looking at an aligned-anyway and the translations are eh, sowieso and (if you want to sound fancy) ohnehin.

The last anway we mentioned is the conversational-anyway. That’s the one we use to switch topics or generally just make a cesura. We don’t really need a test for that one, because it’s always kind of detached.

There are a whole bunch of options for this in German, and which one is idiomatic depends on the context. But the most important thing is that you DON’T use one of the first two translations. So neither trotzdem, nor eh or sowieso. Because that would be really confusing.
Cool.
So far for what we learned last time.
But then one of you brought up another one in the comments, and while I was preparing the exercise, yet another one came to my mind.

Two more use for “anyway”

The first one could be called limiting–anyway, because it kind of limits the “range” or validity of a statement. Here’s a couple of examples.

In both examples, we have a statement that sounds like a general truth but is then relativized to an extent.  Not sure if you know what I mean, but if not, just replace the anyway in the examples with at least. That has the exact same effect. That’s the test you can use. And it’s also a help with translation because one option is zumindest. The other main one is jedenfalls, and I don’t think there’s much of a difference between the two.
All right.
Now, the last use of anyway  is not as common as the other ones, but I still wanted to mention it. Here’s an example:

I don’t know how to describe what this does, exactly. But it’s kind of the same as “to begin with”. So that’s our test for it. And the translation in German for that one is … überhaupt.
As I said, it’s not that common, so it’s only going to be in the exercise once or twice but I didn’t want to leave it out.

Cool.
So, here are the five types of anyway again as an overview with their “tests” and translations:

And now it’s time for you to get active :)

I’ll give you 16 sentences in English with anyway in them and you have to pick the proper German translation for it. If you want to make it a translation exercise, you can do that, too. But you’ll need a pen and paper ;). You can see the correct German translation when you click “hint” or once you enter your answer.
But at least some of the sentences are quite the challenge to translate. The main point is that you  know which anyway to use.
And important:
Try not to use the tests right away. Try to “feel” the anyway first. What vibe does it have in the context. Is it about contradiction? Or is it limiting? The goal of this exercise is that you get a feeling for the different types of anyway.
I mean… understanding my explanation and using the test is easy, but what really matters is that you need to develop a “feel” for the difference. Because even though it’s one word in English, mixing up the translations in German is really really confusing for a native speaker.
So …if you don’t do that well the first time, come back to it, after a couple of days and try again.
But now enough talk… have fun with the workout :)

And? How did you do? Was it difficult or easy? Could you develop a feeling for the different kind of anyway?
Oh and another question… today, I had the quiz display all questions below each other. Do you prefer that or would you rather have the usual form of one question at a time. Oh and would it be more helpful if you got the correct answer right away or would you rather wait till the end?
I know, lots of question… but I want the quizzes to be as helpful for you as possible.  :).
But yeahLet me know all your feedback and questions in the comments and we’ll clear it up together :).
Hope you liked it, and till next time.