The meaning(s) of the Prefix Verb – “anstehen”

A fun look at the various meanings of "anstehen" and what waiting in line has to do with manners and letters on a board. 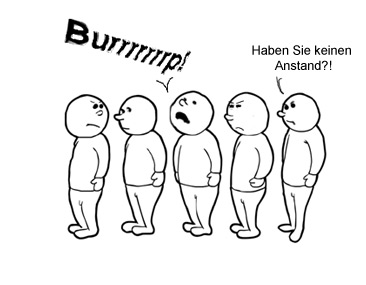 and welcome back the series that we all thought was over but it it’s not: Prefix Verbs Explained.
Whoop whoooooooop.
Today on the menu


So, most of you probably know that stehen means to stand. But what’s more helpful for us is to think of it as the result of stellen.
Because anstehen is the direct result of  anstellen.
Now, anstellen actually has about 37  distinct meaning and we’ve talked about all of those 246 meanings in the series “Anstellen – the Meanings” (link below) but luckily for us here, only one matters:  the one about waiting in line.
Sich anstellen is can refer to the act of joining the end of a line/queue and anstehen is the result of that, the state of being in line.

As you can see in  the last example, it’s also used in a metaphorical sense, but that sounds quite formal and it’s more something for the newspapers.
Cool.
Now, waiting in line is definitely part of life, so anstehen is a useful word. But the noun der Anstand might be even better. Does it have something to do with waiting in line? Well, kind of. Jumping the line would be a clear indication for a lack of Anstand. But it doesn’t mean that you have a lack of standing in line. It means you have a lack of decency. Because that’s what Anstand is. This social decency, that respects conventions and etiquette.
What does that have to do with standing, you wonder? Well, this meaning makes a lot of sense once you know that the German uses stehen  in the context of clothes suiting us. Hold on, here’s an example:

Good, decent behavior certainly suits us well, too, and that’s probably how the meaning came about.
Anstand itself is usually used in contexts where people complain that it’s missing, but there are some really nice compounds with it.

But the one you REALLY need to remember is the adjective anständig. Because that has broadened its meaning a bit and includes a more general idea of good, proper.

And with an un- before it it can mean un-decent. Or lewd, naughty.

Did anyone think chocolate? I didn’t … just curious.
Anyways, we’re really close to too much information here, but Prefix Verb veterans among you will know that there’s one more thing we need to talk about… the r-version. Which in case of anstehen is actually a dr-version.

You see, the r-version has a notion of motion, and combining that with a verb that is 110% stationary, like stehen, just doesn’t make any sense.
Dranstehen however does make sense, because the dr-version always has a stationary vibe.
Taken literally, dranstehen would be something like “stand at something”. However, in practice it’s only used for the stehen in the sense of to say.
Wait what?!?! Stehen means to say?
Well, yes, German uses stehen in the context of stuff being written someone. You’d say “in der Email steht” (the email says)  or “auf dem Zettel steht” (the note says) or “an der Tafel steht“. And the last one brings us right to the meaning of dranstehen. You’d use that if the board is already established in the conversation.

Some people might actually claim that dranstehen doesn’t even exist and should be dran stehen instead, because it comes from stehen an. Which is a very good, logical reasoning. Except… it doesn’t FEEL right.
Now some people probably scream in agony like “Emanuel, feeling is not a criteria If everybody did as they feel, language would be a mess.”
And I hear that BUT there are areas in language where you have to kind of loosen up the rules a bit to do the language justice. Dran stehen as two words would mean that there’s an emphasis on stehen as if that were relevant by itself. When I talk, dranstehen feels like one unit, just like rausgehen feels like one. And no one would argue that we write that as two words.
Not even Maria. And she argues a LOOOOOOT! I bet she’d even argue that we’re done for today.
So let’s wrap up quick, before she finds out :).
This was our look at the prefix verb anstehen and the two things you should take away are the verb itself, which means waiting in line, and the adjective anständig, which can mean proper, decent.
As always, if you have any questions or suggestions just leave me a comment.
I hope you liked it and see you next time.
….
…
… *door opens…
“Emanuel, you gotta mention the verb beanstanden….”
“Oh… Maria… really good idea, but it’s too late. We already finished.”
“Ema!!!”