A quick look at the five (5!!) completely different meanings of "anstellen" and how they all connect. Definitely one of the craziest German prefix verbs. 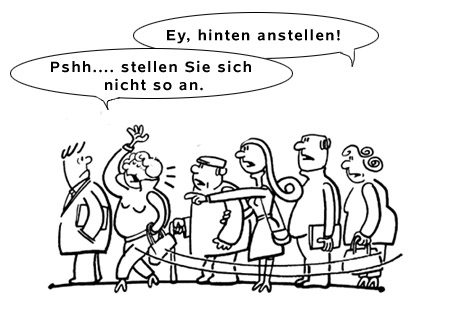 and welcome to another episode of Prefix Verb Shorts. This time  we’ll take a look at

and I can tell you right away… it won’t be that short this time because anstellen has almost ONE MILLION MEANINGS. Five if you want to know the exact number. And they’re about as incoherent as Inception I had rice for lunch my sentence… wait… what? Exactly!
So… let’s waste no time and find out what to employ and acting like a wuss have in common.

An has two notions it can add to a verb: switched-on-ness and at-ness.  And of course in case of anstellen we’re dealing with both. As for stellen itself… if we squint our mental eyes enough it pretty much looks like to put but it’s also used as to set in context for machinery. You stellen an alarm clock for example. And when we combine this stellen with the on-an we get the first meaning of anstellen… to turn on.

Now, German has more options for to turn on and anstellen is not the most common one. It works all right in context for “mid-sized” stuff like a TV, a heater, a washing machine or a car engine, but it would definitely sound over the top for smaller things like a light, a computer or a cell phone. There anmachen is definitely the more natural choice. Actually… I don’t think I use anstellen at all but that might be personal preference.
Anyway, let’s move on to the next anstellen, which is actually sich anstellen… yap, with one of those lovely self references. This one definitely is useful because it is it’s THE word for joining a line, queuing up. How so?Well, stellen with a self reference literally means to put oneself and it’s used in sense of  to take a standing position somewhere/to stand.

That combined with the at-ness idea we literally get to stand at something. And I guess it was used in context of waiting lines so much that it ended up having ONLY this meaning.

And you don’t even have to say that you’re talking about a line anymore… the verb makes it all clear.
All right. Now… the first meaning we had was all about the switch-on-an, the second one was about at. The third one, a super important one, kind of brings them together – to employ.

You can think of either way…  as switching someone on to do a job or putting someone somewhere, at a desk for example. Both ways make sense, I think.
Now, German also has einstellen and for the process of hiring this is the better choice. Most of the “surrounding” words like nouns and adjectives are based on anstellen. And they’re official terms, too, that you’ll find in official paper work, and there, the definition is actually somewhat specific. So here’s a little overview over job statuses that each have their own rules and laws. Just skip it if you don’t care but it might be interesting :)

ein Angestellter –  literally: “an employed person”;
Someone who has a regular job (full time, part time) contract in a non-
industrial job (anything that doesn’t get your hands dirty, white collar jobs)

ein Arbeiter – literally: a worker
Someone who has a regular job contract in an industrial or agricultural field

ein Beamter – literally: a be-“governmental office”-ed person.. from “das Amt”
Someone who works for the state with a special kind of contract that is rife
with perks like “non-fireability” and kick ass pensions. Teachers, policemen
and people at the Bürgeramt for example used to be all Beamte.
Those days are gone though.
The little brother is Angestellter im öffentlichen Dienst (employee in public service)

ein Selbständiger – literally: am independent person
someone who is self employed

Cool.
Three meanings down, two more to go. And now we’ll get to the cool stuff that make you sound super German. What? No, I don’t mean Angestelltenrentenversicherung … I meant cool. As in cooloqui… let’s just move on.
So, we’ve seen that anstellen can mean to turn on. Well… turning something on isn’t all that far from the idea of setting something in motion, right. And setting something in motion is not too far from to start doing something, right. And to start doing something isn’t far from doing something.  And that’s kind of the fourth meaning of anstellen… to do. It’s NOT really a synonym for tun or machen though. It’s used in combination with a few  more or even more boring noun like Ermittelung (investigation), Nachforschung (investigation, research), Analyse, Überlegungen (deliberation)

But this use is more for the newspapers. The cool use doesn’t have a noun. But instead we’ll have to add an extra notion to get the meaning. There are two options. The first one is success and so anstellen ends up as to pull off.

The second notion one is… mischief. Sounds random, I know :). But that’s how it is. In the right context, etwas anstellen can be understood as doing mischief.

This anstellen is incredibly common with kids because it talks about exactly all these little things kids do… play pranks on teachers, break windows while playing baseball, flood the bathroom, flush down daddies iPhone while have it stream live,  leave their empty liquor bottles on their neighbor’s doorst… hold that’s more like teenagers.  But yeah… as specific as it may seem, this anstellen is super wide spread and everybody knows it simply because everybody has done it :).
Cool.
The last one is the trickiest one to make sense of. It is sich anstellen, so we have a self reference again… hooray… and it means something like to act. Not in the general sense of just acting or doing something. Sich anstellen means to act in contexts where you talk about HOW you act, how you go about something and it’s usually combined adjectives like clever or dumb or something like that…. now that I think about… it’s mostly combined with negative things, so people use it to complain.

How does that tie in with the meanings of  an and stellen? Well, I guess it’s somehow related to the whole setting in motion thing … like… you set yourself in motion… in a dumb way. At least that makes sense to me.
The phrasing actually also works without words like dumb. Sich anstellen just used by itself is something like to act sissy, to make a fuss, to be all drama queen because of something small and negligible … I don’t think there’s the one translation but I hope you get the idea.

That last one is really really useful if you have German friends. Next time if someone wants to go home after one beer because he or she has to get up “early” or someone has the sniffles and acts like they’re having the flue or someone doesn’t want to skinny dip because the water is “cold”… just say

I’m sure they’ll be impressed :).
All right. We’re almost done here but before we wrap up there’s one more thing to talk about… the r-version.

Of course also anstellen has an r-version. And like always the r-version takes the local notion of the prefix, in this case at, very literally. Ranstellen means to put something at or right at something else. It’s not all too common but people use it sometimes when they feel just one an is not enough.

These are definitely colloquial but there’s one use that I would say is well established and even the most uptight German literature professor would use it.

Ugh… so annoying. Like… come on… on a Friday after an exhausting course I want to get the hell out of there. I ain’t got no patience to ranstellen my flippin’ Stuhl. And besides, when I come back on Monday all tired I’d have to de-ranstellen the Stuhl which is extra work which is what I do NOT want on a Monday morn…
“Stell dich nicht so an!”
What? Oh… right. Sorry.
So I think that’s it. This was our look at anstellen. It does have 5 distinct meanings but 4 of them kind of go back to the same basic idea of setting something in motion… so it’s not as crazy as it seems when you just look at a list of translation… to turn on, to employ, to pull off, to do something mischievous, to do, to act a certain way while doing a task, to queue up, to act like a wuss. Yeah… that really looks  crazy.
As always, if you have any questions or suggestions just leave me a comment.
I hope you liked it and see you next time.

spoken past:
form of “haben” + angestellt

written past:
stellte an

useful phrasings:
Ich bin angestellt. – I have a regular job.
Stell dich nicht so an. – Don’t be a wuss.

related words:
angestellt – having a regular contract (as opposed to freelancing)
der/die Angestellte – the employee (not industrial or agricultural jobs)