A really cool way to study :) 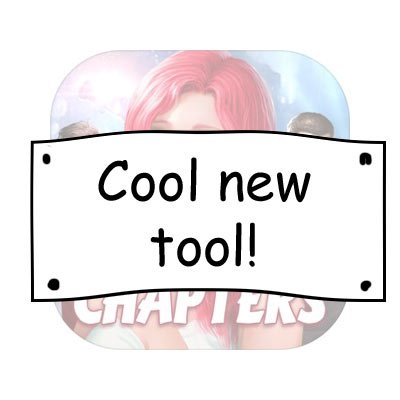 So some of you might know that I am currently getting my driver’s license. Because, you know, this fall I will turn 18, so it’s about time.
Nah… okay, I’m not turning 18, of course. But I really am taking driving lessons. In Germany, it is quite expensive to get the license… about 2000 Euro or so, if everything goes well. I never had the money for it and also, owning a car is expensive too, and in Berlin you simply don’t need it.
But being able to drive makes a BIG difference when you want to travel somewhere, so that’s mainly why I am doing the license now.
Anyway, so I’m actually taking the theory test this week and I REALLY need to prepare so I’m not gonna manage to finish a new article.

However, I still have something to share with you

A really great method for learning

and, funnily enough, I actually found it while learning theory…

So I have this app for studying the 1000+ theory questions and because I don’t want to pay premium (this driving thing is expensive enough as it is) of course it’s full of ads. Particularly, ads for gaming apps.
And while many of them are unbelievably dumb, there was one genre, that is actually kind of what I always wanted for language learning:

If you don’t know what that is, Interactive stories are stories where you as a reader get to make decisions every now and then that’ll decide how the story progresses.
And there are some of those designed particularly for language learners. I introduced a couple of them in past advent calendar posts, so I’ll put the links below.

The apps that I found now are NOT specifically meant for learners, but I think they’re actually AMAZING!
And just to make sure… this is not sponsored or anything. I’m just really excited about this, because I would LOVE this as a learner.
Why do I think it’s so cool?
Well…

Seriously, lots of learning material is kind of boring and these little stories are the opposite.
Here’s an example synopsis of one of the stories, as the app describes it :

– Ein Milliardär mit allem, was man will. Das Einzige, was Ashton Miller aber will, bist du.
– A billionaire with all one can wish for. The only thing that Ashton Miller wants, however, is you.

I mean, come on… you basically get to play a soap opera or a cheap romance novel.
Here’s a couple of screenshots: 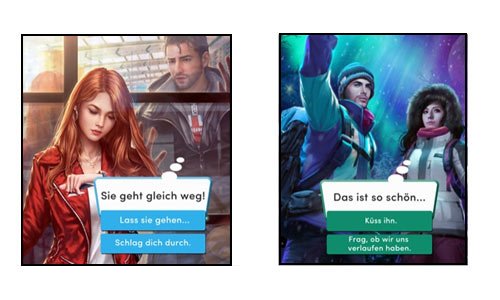 Now, like pretty much all apps, also this one is “Freemium”. So you can play for free but there are certain features that cost money and depending on how pushy the app is, it might “hinder” the free fun at some point.
Actually, I read a few reviews, that the app is a bit pushy and costly. I just didn’t try it enough to get there.
But I think it might still be a better, cheaper and more fun investment than in some online course that claims to teach you colloquial German or something, so if you have the money spare and you like it, then go for it.

Also, I should point out again, that it is NOT designed as a learning app.
I actually was so excited about the concept that I reached out to the developer studio to ask. They told me that they have a dedicated German team translating the stories and that you can toggle between German, English and Spanish.
I tried that on my phone and it meant that I have to leave a story. So I couldn’t see the immediate translation of a line. I’ll have to ask them again, because that would be just incredibly helpful.

Anyway, if you’re looking for a fun, light-hearted way to read a bit and study vocab AND play at the same time… it doesn’t get much more fun than that, I think.
I would totally use it, if there was a Bulgarian version (the language I am procrastinating learning) and that means a LOT because I usually don’t like using apps.

Now, the app I originally found is called “Chapters”. That’s the one I tried and where the screenshots are from. But that’s only one option. Another one is called “Is it Love – Sebastian”, which is more about vampire coming of age kind of stuff. And there are many more, so check out the “Similar Apps” section in the app stores.
I’ll give you the link to the Chapters app in Google Play Store and App store and leave the rest to you :).

So yeah… I was really really excited when I found this… well, when this found me. And I’m kind of sad, it doesn’t exist in Bulgarian.
I’d definitely use it and I think it might be really really helpful for some of you.

And of course  I am really curious what you think about it. Does it sound interesting? Or have you tried these kinds of apps for learning or for fun? Did you like them? Do you have suggestions for others?
Let me know all your feedback and thoughts in the comments.
And cross your fingers for my theory test :).
Have a great week and see you next time.

Oh, and if you want to get a better impression of the app, there are actually “play through”-videas on Youtube, so I’ll put a link here… it’s in English, but you ca get the same story in German.