A fascinating, almost philosophical look at the meaning and origin of "das Wesen" and an insight into what being has to do essence and absence :). 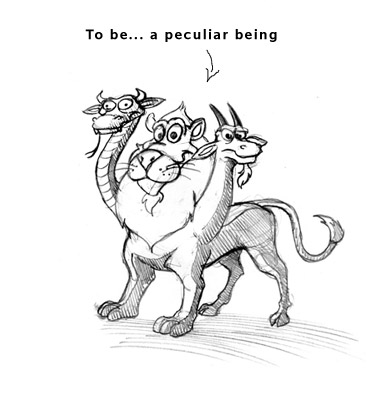 and welcome to our German Word of the Day. And if you haven’t had an epiphany lately get ready for one because we’ll have a look at the meaning of

Okay… maybe epiphany was a bit too much. But we’ll definitely learn som ecool stuff.  So, if you’e read fairy tales or fantasy novels in German, you probably know that a Wesen is a  creature or being.

German also has die Kreatur but this word has a high Frankenstein-factor,
it’s often used if people want to express that a being is miserable or ugly.  Wesen has a high unicorn-factor, it sounds fine, ethereal, a bit more divine.
Now, Wesen has a second meaning and it kind of fits with that ethereal-ness because Wesen is also used in a non-physical sense the core character of something or someone. How something is.. like… at the core. It’s hard to describe it so let’s just look at examples.

So we have these two uses and they both revolve around being in some way. Now we could go to the related words because there are some really good ones but instead we’ll go somewhere else. To an opera.
Boooooooooooh.
Nah, don’t worry. We won’t go to an opera. We’ll just make a little detour into the past and take a look at to be itself. Because Wesen has a LOT to do with that.

So… have you ever thought about what a crazy mess the verb to be is? Because it is. I mean… come on

Do these look like words that have anything to do with one another? In German it’s not much better

So what’s up with that. Why are these forms so random.
The solution to this this mystery is that  to be and sein are actually smoothies.
I mean blends. Blends of 3 distinct verbs or roots.
The first one is the Indo European es which simply meant to be. It’s obviously the root for is and ist. But that’s not all. The es-root is also where am and are come from which were eom and eart in Old English. And it’s also the origin of sein and sind. They just lost the initial e.
The second verb or root in the blend goes back to the Indo-Europen bheue. This meant to grow, to come into being and it’s the origin of be, bin and bist. And it’s also the origin of some Romance past forms with f… like French fusse or Spanish fuera or fui.
Last but not least we have the Germanic verb wesan which meant to dwell, to remain, to live at a place. This dwelling-thing was really the core of it for a long time and especially in German it’s still alive in the noun das Anwesen. which today is a big mansion with a park but once it was just a piece of land with a hut.
But slowly people started using the verb also in the broader sense of being. And then and for some reason eventually wesen fell out of use as a verb itself and ended up as what it is today…. the past tense of to be… was, were, war- and of course the German version for been…. gewesen.
So… *es, *bheue and wesan… these are the three ingredients for to be. And because it’s kind of confusing here’s a little overview for German and English mixed them:

The two languages (and I guess others as well) really tried around for a while and then each made the blend they liked best. There’s no real logic why it’s sein in German and be in English. It’s just how it ended up.  Kind of crazy, isn’t it.

Anyway, now it’s time to get back to our Word of the Day das Wesen.

We’ve learned that it means creature or being and with all the background we have that makes perfect sense now because wesen actually is a part of  to be. We’ve also learned that another part of to be is the Indo-European root es. What we haven’t said yet is that this es-root is also the root for the Latin form version of to be… esse.
And that connection totally shows in the related words.
German has played around with wesen quite a bit before largely dumping the verb. Adding prefixes, making nouns, shifting meanings here and there. Very little of that survived but there are three leftovers in particular that are really super common. The first one is anwesend. German once had anwesen as a normal verb and it meant to be there but only anwesend and the noun die Anwesenheit survived. Literally those mean being there and the being there and best translation are present and presence. And do you know where these come from? From esse… the Latin version of to be.  Tadah. Esse combined with pre is literally being that is right in front of someone.  So present and anwesend are essentially the same thing, just expressed with different roots. Examples

Now, just to make sure… presence in sense of having a nice presence is NOT Anwesenheit. That would be Präsenz. Anwesenheit is really the being there.

The opposite of  anwesend is, surprise surprise, abwesend… or Abwesenheit  if you need a noun. Literally these are (the) being off/away and the translation is of course… absent or absence. And these are totally Latin. Ab (away) + esse (to be)

Last but not least there is wesentlich and wesentlich means… drumroll….  essential. Do you have an idea where that co… what am I asking, of course you do :D.   Essential obviously comes from Latin esse, too.

Now, we should probably mention that wesentlich is NOT a good translation for essentially in most cases…. sometimes im Wesentlichen works but most of the time im Prinzip or im Grunde are the better match.

All right.  There are some other wesen-words and I’ll list them in the vocabulary but they’re all left overs of German’s playing around with the verb and are kind of hard to explain. Add they’re not that important so I think we can call it a day here. This was our look at the German Word das Wesen. It means being, creature and something like core character but the real takeaway is that it comes from a verb wesan. Both German and English had it as to dwell but in both languages it gradually became the past tense of the “to be”-smoothie. And maybe that’ll help you remember just what is  been in German. Because many people struggle with that.
It’s gewesen. Kind of like was, only with a ge :)
As always, if you have any questions or suggestions or you have a wesen-word you can’t really make sense of, just leave me a comment.
I hope you liked it and see you next time.

gewesen – been
das Wesen – the creature/being, the core character/nature
das Lebewesen – the living being
wesentlich – essential
im wesentlichen – for the most part/(essentially)
im Prinzip, im Grunde – essentially
abwesend – absent /absent minded
die Abwesenheit – the absence
anwesend – present (as an adjective, there)
die Anwesenheit – the presence (in the factual sense of being there)
sein Unwesen treiben – do mischief  (probably based on the idea of living = behaving combined with the negative-un)
das Bankenwesen – the banking sector/industry/branch (the suffix -wesen is often used to refer to the entirety of a sector… quite formal though)
wesensgleich – of the same nature