A thorough look at the meaning of "weise" and its family and what proving has to do with hints, identity cards and wisdom. #mindblowing 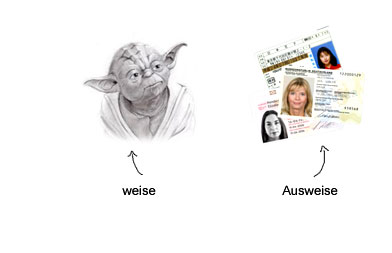 It’s probably not a surprise that weise is the German version of wise. What might be more of a reveal is that the two are related to one of the German verbs for to know: wissen.  And there is wissen’s brother weisen (and its  zoo of uber useful prefix versions) which is basically the “causal” brother of wissen and originally meant “to make know”.
And now what is the most bestest way to make people know something?!
Exactly!
Power-Point Presentations.  (buy your Power Point here on Amazon, 10% off)
And that’s precisely what I have prepared for you about the weise-family. Are you ready for 176 slides full of boredom and bad layout about the family of weise?!?!
Perfect, let’s jump right in then with slide 1….

Of course Power Point is NOT the best way to make someone know something.
But a truly really good way, the most primal way in fact, is showing, pointing. Like… if I wanted to tell you what a Kastanie is, I just go like “Look!” 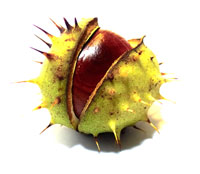 And you’d be like “Oh, I see.”
And the cool thing is that weisen and wissen have a LOT to do with looking. Because… drum roll please… they actually come the Indo-European root  *weid , which meant to see and which brought us words like vision, evident or visible.
It’s kind of funny to look at visible with the German wissen in mind… like… “wissable”…. if you can see it you can know it.
From seeing to knowing it’s really not that far.
And why does that matter?
Well… check out these examples

You can think of it as “showing the way” or “making know the way” – it’s really kind of the same thing. This connection, this blend of showing and informing, is the core of weisen. And it’s of course also the key to the prefix versions of weisen which are also known as Must Have Brothers. And no, I don’t mean these two.
Seriously… weisen itself is not that useful but the prefix versions are the bomb.
The range of meanings is super crazy and reacher from reject to wire transfer to turn out. But with the core idea of showing-informing in mind, it’s obvious that they’re all cut from the same cloth.
Actually, let’s do a little try. I’ll give you the examples and you see, if the meanings make sense to you, okay?
Cool.

And? Do you have an idea?
Der Ausweis is based on the idea of “informing the outside (world)”  and the second example is more about literally showing someone out. This one is only used in rather formal contexts though.
Cool.
Let’s try the next few…

I hope you can see that they all have this weird mixture of pointing and informing, just with different general “directions”. Hinweisen points you to a piece of new information, abweisen points you away, tells you no and überweisen is in essence about sending from A to B, only that it’s limited to two niches.
Ready for round 3? The toughest one?

As usual, these prefixes play hard to get, so don’t worry if you couldn’t really make sense of those. Beweisen is basically an intense version of making known. Proving something is making it known for real. No doubt left. Erweisen is based on er- in its very old sense of outward. Something shows itself out. And as for verweisen, that’s a classic away-ver.
Cool.
Now, having gone through these examples, I think you know why I called the weisen-prefix versions the Must Have Brothers :). And those weren’t even all of them. There’s also aufweisen (idea of feature, have) and anweisen (idea of order and instruction) and einweisen (idea of introduction) and unterweisen (a sort of teaching) and more.
But I’m actually quite sure that, with the core idea of showing and informing in mind, you can understand all of them from context and if not, we can talk about it in the comments.
So instead of looking at more examples, let’s turn the spotlight back to weise.
I mean… it’s in the title, so there must be something more than just pure wisdom. Tssss…. wisdom… so boring.

So yeah, weise means wise and when we remember that they’re both connected to wissen, we see that they basically just mean “knowing”.

But most of you probably know that wise has a second use; it is also an ending. You can add it to nouns to create a word that means something along the lines of

“as far as the noun is concerned”

or to put it in more modern wording:

“in the noun department”

Relationship-wise, unicorn-wise, food-wise … it works pretty much with any noun. Problem is: this does NOT work in German, even though the German -weise is also an ending and there are loads of super common words with it like beziehungsw... uh… like… komischerweise. And yet, it would confuse the hell out of a German speaker if you were to translate food-wise as essensweise. Why? Because Essensweise would be understood as way of eating.
You see… German has the noun die Weise which means way, manner. Die Weise is by far not as common as die Art, which also means manner, but there are a few common phrasings with that you’ll definitely come across.

Get it, get it… yoga… flexible … uh… yeah, that’s all I have to offer joke-wise.
Which brings us back to the English wise-ending.
This idea of manner, way that we see in German Weise, is the actual core of it. And we can see it in older words like stepwise (“in a step manner”) , likewise (“in a manner of the likeness”) or clockwise (“in the manner of the clock”). The notion of “as far as noun is concerned” is shift in meaning, and that shift just never happened in German. That’s why Essensweise does NOT mean food-wise.
The German -weise has kept the older sense of “in a manner of” and German has haufenweise (loads of) useful, super common words with it.

Those are really but a few examples and it was really hard to pick some because there are so many common ones. If you want, we can talk about more of them in the comments.
As you can see English wise-words don’t really show up as a translation. So.. weise and wise are not really false friends, but when it comes to the endings, it’s better not to try direct translation because they will rarely work.

Cool. And I think that’s it for today. This was our look at the weis-words and we’ve covered absolutely everything there is to say abou th… oh, hold on, see we have a call here, Bisimwa from Kongo, welcome to the show.
“Hey Emanuel… so what about the elephant in the room?”
Uh… I don’t know why you’d have an elephant in your room. Do you have a really big door?!
“Haha, very funny. Come on man, you know very well what I’m talking about. What about beziehungsweise?!”
“Yeah man, what about it.”
Wait, what….  Why are there two callers now… who are you?
“I’m Cassey from London and we’re not two, Emanuel. ”
“Yeah, we’re many. And we want beziehungsweise.”
“Yeah man, you can’t like … just just pretend this word doesn’t exist.”
Crap… there must be something wrong with my phone system….
” Exlain it or we’ll cry. Or riot. BE-ZIEH-UNGS-W….. ”
Hello… hello… a phew, It stopped. That never happened before How did so many people end up in my hea… I mean the phone system at the same time.
But seriously, I know many of you are confused by beziehungsweise is a -weise word but I just feel like cramming it in here would be too much. We’ll talk about it some other time.
Big unicorn promise :).

So yeah, that’s it for today. This was our look at weise and the verb weisen and even though they don’t usually come to mind as part of the most important words, you will be surprised how frequent you’ll come across weisen-versions or words with weise as an ending.
If you have questions about any of this or if you want to talk about a particular word that we didn’t mention, just leave me a comment.
I hope you liked it and see you next time.

abweisen – reject
anweisen – instruct (giving orders in a work context), also: place an order to wire money
sich ausweisen – identify oneself
der Ausweis – the ID card
ausweisen – expel
ausweisen als – declare (in sense of label)
vorweisen – to show (as in present a result)
überweisen – to wire transfer money, also: to refer in sense of doctors
die Überweisung
unterweisen (die Unterweisung) – instruct (in a teaching sense)
aufweisen – to show, to have (in context of characteristics or short comings)