Today, we'll take a look at the prefix verbs of "folgen"and see how success relates to following. Special guest: folgern. 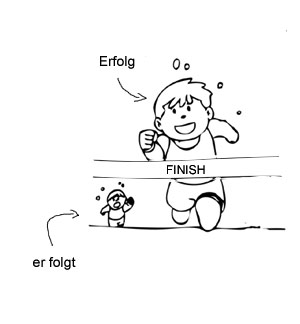 Last time we learned that the verb folgen is used more broadly than its English brother to follow and we saw why it makes super sense that the main idea of the noun die Folge is about consequence.
If you haven’t read it or you want to read it again, you can find it here:

Today, we’ll look at the prefix versions of folgen. And then, just like real investigative reporters, we’ll go down to the yard, look through folgen’sgarbage and discover an appalling secret. Or was it appealing?
Anyway, let’s waste no time and jump right in with folgen‘s prefixes.

The three prefix versions that are really useful all happened to have non-separable prefixes: verfolgen, befolgen and erfolgen.
Let’s start with verfolgen.

And believe it or not, from an etymological point of view, verfolgen actually has not one, not two but THREE brothers in English: to pursue, persecute and to prosecute.
Remember that Latin verb for to follow, that we mentioned last time? It was seque-something? Both, prosecute and pursue are basically that verb, just with prefixes. And if you’ve read my article on ver- then you know that pur and pro are brothers of the German ver-.
Now, are they also translations? Well, at times they are. In fact, pursueand verfolgen line up pretty well in the sense of “following” some sort of mental road map. But I think it’s better to understand the vibe of verfolgen.
The ver-carries the idea of for here (another one of its relatives), making verfolgen a much more direct, or let’s say intense version of folgen – and this also shows in the grammar, cause folgen uses and indirect object (dative) while verfolgen uses a direct one (accusative).

The second one sounds more invested, more attentive. And the distinction is even more clear in context of people.

The first one usually means that you’ve been asked to follow. It technically can also be about secretly following but it doesn’t sound very intense. Verfolgen on the other hand is basically about tracking and chasing and in context of people it is NEVER wanted. This also shows in the word der Verfolgungswahn, which is the German word for paranoia, (in the sense of being watched, not forgetting to turn off the stove).
Let’s look at a few more examples for verfolgen.

Oh, and then we should not forget the prefix versions of verfolgen.

Sigh, the difference between zurückverfolgen and nachverfolgen is basically that the former goes from end point to start point while the latter goes from start point to yawn point. I … I mean end point. What?
Oh yeah, totally. I agree that prefix versions don’t need second degree prefix version of their own. But German thinks they do and so they do. Thanks German. Just keep pushing us around like that. It’s your karma, man, yours.
Anyway, let’s move on to befolgen.

Be- has a notion of direct impact on,and one thing this can give to a verb is an increased intensity. And again, this also shows in the grammar because verbs with be- usually (not always) take a direct object. If you’re ready for a little mind yoga, you can think of it as to “befollow”.
Now, increased intensity and a direct object – that sounds awfully similar to how we described verfolgen, right? But the two have nothing to do with each other because befolgen has narrowed down to one specific sense: following orders, rules or advice. So basically, doing what you’ve been told.

For advice, you can use either, folgen and befolgen, but for orders and rules befolgen is the word to use. And there isn’t more to say so let’s move right on to the third verb: erfolgen.

This one is odd. The verb itself is a rather stiff, bureaucratic sounding option for to happen, to take place.
You pretty much never hear this erfolgen in conversation but you’ll definitely find it in official writing.

Now, if it were just for the useless verb, we could leave it at these two examples and move on. But it isn’t. The verb has a noun. And that noun, der Erfolg, is a pure success. Like, literally :).

Yup, der Erfolg is the German word for success and this meaning actually makes a lot of sense. Think about it, success (usually) comes as a follow up to some sort of effort. So we’re back at our very basic idea of one thing coming after another thing, just with a from the perspective of reward following effort.
And now guess what… that’s precisely what success means. Success is originally a combination of the prefix sub- in the sense of as a supplement and the verb cedere and this meant to go. So the original sense of succeed was kind of “to go with/after”. So kind of to follow :).
So… they might not be related in a technical sense, but der Erfolg and the successboth come from the simple idea of one thing coming in the wake of another.
Cool.
Two quick notes about this. German doesn’t really have a verb to succeed. Instead you’d say Erfolg haben or erfolgreich sein. Or you’d just use schaffen.

And the second thing that we need to mention is that whenever there’s a success-word that is NOT about success, then der Erfolg is NOT the right word anymore.
And that brings us to the other prefix versions of folgen.
Don’t worry, it’s just a couple, and they’re pretty useless :).

The first one is nachfolgen which literally means something like to follow after. Yeah… like you can follow by being ahead. Pshhh, German, pshhh.
Anyway, nachfolgen is about following in sense of succession but I doubt you’ll ever see the verb itself used. What you will see is the noun der Nachfolger and then there’s yet another word for your B1-writing-assignment-bloat-phrase-collection: nachfolgend.

Your teacher will love it.
And finally, we the noun die Abfolge. Yeah, just the noun. I really don’t think I’ve ever heard abfolgen anywhere. Die Abfolge, which is rare, translates to sequence and we could now spend some boooooooring time on discussing what exactly the ab adds to Folgeand if Folgealone can mean sequence too and what the difference is to Abfolge or we could just get right to the fun part and go through folgen‘s garbage for some gossip.
Who’s for gossip? Everyone? Cool.
Let me just put my rubber gloves on real quick… all right… so what do we have there. Banana peel. Can of tuna, half eaten. Empty toothpaste. Pizza cartoons… scribbled on pizza cartons. A cup of soy yogurt, raspberry flavor. Hmm, nothing too reveali… oh what is THAT. An empty box of r-polish?! That is odd. Why would you have r-polish if you don’t even have an “r”?!?! There’s only one conclusion we can draw from this: folgen must has a version with “r”.
Dunn dunn dunn!

Remember that notion of deduction that folgen was used for? Like, you have a fact and that fact implies another fact, a follow up fact, if you will. Let’s look at an example again.

This notion of logical conclusion is the core of folgern, only that folgern is actually what WE do if we draw such a conclusion.

The verb itself is not too common in daily life but you might see the noun die Folgerung or the needlessly longer noun die Schlussfolgerung, which both mean conclusion in the sense of some sort of thought reached through logic.

And I think that’s it.
Wohoo. This was our look at the prefix versions of folgen and I think it’s clear now that folgen is much more than just following :).
As usual, if you have any questions about any of this or if you want to try out some examples and have me correct them, just leave me a comment.
I wish you all an erfolgreiche Woche and see you in the next episode.

befolgen – to go by (for instructions and counsels), to obey (for orders)

folgern – to deduce A based on B
die Schlussfolgerung – the conclusion, inference