German 'spenden' and English 'to spend' are classic false friends. Today, we'll learn what 'spenden' means, and how to say 'to spend' in various context. 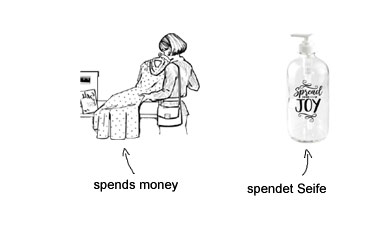 and welcome to a new episode of False Friends Explained, this time with a look at

spenden vs to spend

And those two are actually not THAT far apart. Still, there’s a lot of room for confusion.

… because spenden is the German word for to donate.

Actually, it’s a bit broader than to donate and the translations can vary.

Jesus Christ… feuchtigkeitsspendendes.?!?! Moisturizing the listener, this word. How is anyone supposed to pronounce this. And it’s sooo loooong. No wonder that the German version of Scrabble is called Scabbabbbligkeitsungität and has an edge length of 2 meters. And that’s the travel edition.
Anyway, even though the translation is not always to donate, the core of German spenden is kind of a selfless giving and it DOESN’T have this notion of investment or trade that the English to spend has.
And now the question is, which language messed up the meaning? Let’s take a look at the history and find out.

the surprising origin of “spenden”

As Germanic as they might seem, to spend and spenden actually come from Latin and are closely related to words like expensive and expense. That makes sense, right. Oh and dispenser is also related, so we have another parallel there.
The origin is the verb pendere which we also have in words like depend or pendulum. Pendere was about hanging and expendere was about weighing and paying. Wait… how does that any sense… let me read up real quick… uh… okay …  apparently, the meaning was inspired by a scale. Like… weighing the gold or silver for a trade by putting it out on a hanging dish. Oh man, I wonder what these Romans were smoking.
Anyway, so the Latin expendere already was about paying and expensive, expense and spend have stayed true to that, while spenden lost the aspect of commerce and shifted toward giving.
But the original meaning has survived in the related noun die Spesen. It’s a plural only noun and it’s the German word for expense. Well, actually it’s more business expenses so expenses you have for the job. But it’s at the heart of a really common idiom that describes that you put in a lot of effort without getting any benefit.

And this example actually brings us right to the next related word, which is quite the surprise, even though it is just an i away. Die Speise is a German word for … a meal.
And we don’t actually need much crazy mind yoga to understand the connection. The word was coined by monks. They spoke a lot of Latin and their main expense was food. Tadaah.
And by the way… in Italian there is la spesa and even though it can technically mean expense, you will see it a LOT in context of buying food.
It’s not the only word German has for that, and it’s not used that much as a stand alone but there are a few REALLY common compounds with it.

And there’s the verb speisen, which is a pompous snobby sounding option for to eat. And for some reason it’s also used in context of “giving electricity into a system” … I mean… it’s nothing you need to use actively. I just wanted to mention it because it might be confusing when you read the word “Einspeisevergütungsgesetz.” in the context of renewable energies. But okay… I guess that is confusing either way.
Anyways,  last but not least, there’s the verb spendieren, and this one is kind of the little, light hearted brother of spenden. Like… spenden has this serious vibe of someone being in need. Spendieren is more about giving out treats.

Not super common but it’s one of those words that’ll really make you sound like a native speaker if you use it at the right moment.
Cool.
So now we know what spenden is and where it comes from. But there’s one more thing we need to answer: how to actually translate to spend.
And the answer to that is the answerest answer ever

“It depends.”©
Answer to all questions German language since 1834

For spending money, the word is  ausgeben (we’ve talked about it in detail in another article, I’ll link it in the vocab section) and for anything time based like weeks or vacations or child hoods, the word to go is verbringen.

And there are a few other options but they’re rather specific so if you have a context in mind that you’re unsure about, let’s just talk about it in the comment.
And that’s it for today. This was our look at the pair of false friends that is spenden and to spend.
As always, if you have any questions or suggestions just leave me a comment. I hope you liked it and see you next time.

spenden (gespendet) – to donate (also: to give)
die Spende – the donation
der Spender – the donor
spendieren (spendiert)  – give out as treat
spendabel – generous