A fun look at the noun "der Lohn" and how to say “It’s worth it” in German. Oh, and a look at the difference between Lohn and Gehalt #boring 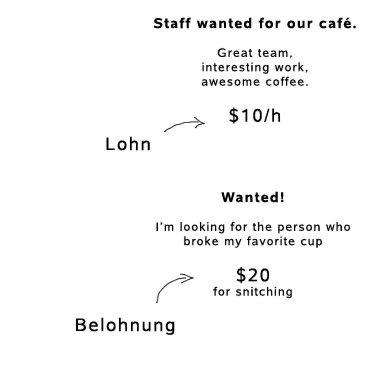 A great word to know, though we’ll also talk about something really incredibly boring. But we’ll also look at the meaning of the verb lohnen, and that’s totally worth it. Like… for real. Like… literally.

Lohn sounds a lot like the English word loan and the main use of both of them is money that you get. But that’s just a coincidence because the two are not related. And Lohn is muuuuuuch cooler because… you don’t have to pay it back.
The origin of Lohn is the super ancient Indo-European root lau. Lau was about the idea of winning or gaining something and naturally, first this was focused on raiding and hunting, a meaning that has largely been preserved in the Slavic branch where the descendants of lau mean prey, loot. In Latin on the other hand, the root shifted to a more general sense of gain, benefit, profit. That’s where lucrative comes from, by the way.
The German Lohn evolved in a similar way but already 1000 years ago it had shifted its focus toward the idea of reward, gratification for some work or effort. And with the rise of regular paid labor came the main meaning Lohn has today: wage.

Now, those of you who have worked in Germany most certainly know the other common word  for wage, salary: das Gehalt. On official documents like the tax return blue print or an application for a Wohnberechtigungsschein (yeah… I know it’s looong), the two are treated as two distinct things – a fact that causes a lot of confusion because very few people actually know the difference. Neither did I, so I had Daniel, my intern, prepare a little write up…  I’ll read it to you now.

Das Gehalt is a monthly fixed total that does not really depend on the
amount of hours you’re working. Like… if your contract says “1800 brutto”
(1800 before tax) , then that’s a Gehalt. Lohn on the other hand is paid
based on hours and even when you’re working as a regular employee you
can get a different payout every month. That’s why it’s  Stundenlohn
(hourly wage)  and Mindestlohn (minimum wage) and
NOT  Stundengehalt or Mindestgehalt. The general term for both
Lohn and Gehalt is das Entgelt and the proper term for sick pay, which
people usually call Lohnfortzahlung im Krankheitsfall (“lit.: forth-
payment of wage in case of illness“), is actually Entgeldfortzahlu…

yaaaaaawwwwwwwwwwnnnnnn… my god, this is soooo boring. And there are still 10 pages. Daniel, dude, why did you make that so boring…..  what?…… boring topic? No man, there’s no such thing as a boring topic. There’s just boring presentation… yeah… look, we’re live so I can’t explain that now but we’ll talk later, okay… … … cool… oh, can you fetch me a coffee?Thanks.
All right.
So der Lohn is about the idea of compensation, gratification for some sort of work you did and the most common meaning is wage. Definitely a good word to know but what makes it REALLY useful are the related verbs

There are two prefix verbs based on Lohn: entlohnen and belohnen. Entlohnen is some fancy version for  to (financially) compensate but it’s pretty rare and I don’t think it’s worth learning.

Belohnen on the other hand is super useful. Taken our standard be-idea we get “to inflict compensation” or “to put compensation upon someone” and it doesn’t take too much mind bending to get from that to the real meaning: to reward.

Now you might be wondering if there’s also a stand-alone verb lohnen. Well, a few hundred years back, it did exist and it  simply meant “to compensate someone”. Today, only one version is still in use…  sich lohnen.
Yeah… German really does love itself some self reference.
Literally, sich lohnen  means something like “to pay, compensate for itself” and that’s really not too far from the actual meaning… to be worth it.

German also has es wert sein, which is the more literal equivalent to to be worth it.

but es wert sein sounds a bit grander, more epic. Sich lohnen is for every day stuff and it has some vibe of  “great deal” in it, though you wouldn’t use it in context of actual shopping.
Examples:

I know it might be a little bit tricky to use this,  with the weird sich but it’s worth trying… es lohnt sich, es zu versuchen.

And I think that’s it for today. This was our look at the meaning of der Lohn. As always, if you have any question or suggestions or if you want to try out some examples with lohnen and get them corrected, just leave me a comment.
I hope you enjoyed it and see you next time.
Oh and to really hammer the structure of sich lohnen  into your head, here’s a link to a famous old Schlager called “Liebeskummer lohnt sich nicht”… viel Spaß :)

(dear copyright lawyers, I posted a link here. In case it gets transformed into a video window let me know)

sich lohnen – to be worth it, to be a good deal
lohnend – lucrative

belohnen – reward
die Belohnung – the reward (a bit like a price)