The English "sensible" and the German "sensibel" look REALLY similar - but they don't mean the same thing. Today, we'll find out why and how to translate them. 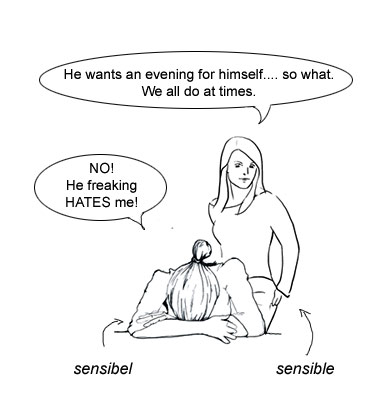 and welcome to a new episode of False Friends Explained, this time with a look at the words

A pair that can lead to serious misunderstandings when it comes to describing people and their character.
If your coworker tells you that your new boss is extremely sensible, that’s great news.
I mean… who wouldn’t want a sensible boss, you can reason with.
If, however, your German coworker tells you the new boss is “extrem sensibel” … well… you might want to bring some tissues to the next meeting.

Because the German sensibel is all about being sensitive .

People and their feelings and character are the number one context for it but it’s also used in a broader, technical sense.

Saying “sensible skin” would be a typical mistake for a German speaker. I have said that myself multiple times. In my case, it’s not a mistake, though. My skin really is sensible.
Like… a few months back all these pimples spawned on my forehead so I was like “Yo skin, what’s up with the pimples. Could you stop that?” and my skin was like “Why?” and I was like ” That’s not helping me picking up women.” and my skin was just like “You have a girlfriend, remember?!?!.” That’s how sensible my skin is. So awful.
But I digress, so  sensibel means sensitive. And the big question is what happened? Why don’t sensible and sensibel line up?

Well, the origin is obviously the Latin word sensus and already back then it was sense in the sense of sensual perception as well as sense in the sense of making sense.
Wow, that was a lot of sense in one sensesense. I … I mean sentence :).
Anyway, the adjective sensible (or its older version) could express that “someone is capable of sensing”  as well as the idea that “something can be sensed” and the more conscious variation “something can be understood, comprehended”. That’s how the whole angle of reasonable came in.
English got the word about 600 years ago from old French. It slowly refocused on the idea of reasonable  and left much (not all) of the perception angle to sensitive.
German also imported its sensibel from French. But it did so about 300 years later and what’s more important – it imported it in a very specific context: the context of medicine. German sensibel was first used to talk about patients feeling pain or reacting to treatment. It didn’t take long before it made its way into every day vocabulary but the whole aspect of logic and reason is missing completely because it was never part of the word in German to begin with.
So, no one really “messed up” the meaning this time. German kind of missed out, but don’t say that out loud… German is a little sensitive with this ;).

All right.
And what about sensible? How do we translate that? Well, it depends on context. If sensible is used in the sense of reasonable, then the best word is vernünftig, if the focus is on purely having some sense, then you’d say sinnvoll.

But sensible, or sensibly I should say, also still has the perception angle in it, so if it is used in the sense of perceivable/detectable then you’d use merklich or fühlbar or spürbar; in a technical sense even messbar.

And I think that’s it. Oh… hold on there’s a call… Akira from Kyoto in Japan, welcome to the show.
“Hello Emanuel, thank you so much for taking my call. I have question if I may.”
Of course Akira, go ahead.
“So, I learned in my course empfindlich as sensitive. Is that synonym for German sensibel or are there differences?”
Great question! I totally forgot about empfindlich. It is really similar to sensibel and in the context of people you can more or less interchange them.

In more technical sense of perception, detection, empfindlich is the more idiomatic pick and there’s the noun die Empfindlichkeit which is much more common than Sensibilität...

And then there’s the noun die Empfindlichkeit, which is much more common than die Sensibilität.
“So if I use sensibel just for people I’m on the safe side?”
Yeah, I’d say yes. I feel like there are some more subtle differences but I can’t really put my finger on it right now. I hope I could help anyway.
“Oh yeah, definitely. Can I ask one more question?
Of course!
“What about sensitive? Does German have that, too?”
Well, I think it exists in some technical jargon but in daily life you’ll pretty much only see it as part of hygiene product names … you can get an impression with this Google image search, if you’re interested.
“Haha… awesome. Thank you so much.”
Thank you for calling.  And to all of you out there, thanks a lot for tuning in. This was our look at the false friends sensible and sensibel.
As always, if you want to check how much you remember, just take the little quiz I have prepared for you.
And of course, if you have any questions or suggestions or if you want to try out some examples, just leave me a comment.
I hope you liked it and see you next time.

das Sensibelchen – the sensitive plant (slightly mocking)
die Sensibilität – the being sensitive (for people)
die Empfindlichkeit – the sensitivity
sinnlos – pointless, senseless
unsensibel – insensitive (in the sense of having no tact)