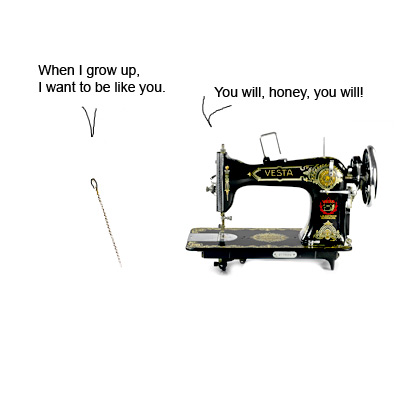 and welcome to our German Word of the Day, the Summer, Sun and Vocab Fun special edition.
Which basically means it’s shorter and stupider. But also more fun :).
And today, we’ll take a quick look at the family around the German word

which is the German word for to sew.
And in case you’re now like
“Bruh, I don’t even use that in English.” or
“Bruh, my torn jeans are a way of self expression.” or
“Bruh, I’m living with mom, I’ll ask her.”  let me tell you… yes, sewing sounds boring.
But sewing a tear or sewing on a button is not hard at all and it is a really helpful life skill. And especially for the dudes and bros among you – sewing is an absolutely sexy alpha chad skill. Like… basically, it is like spear fishing, just with a smaller spear and without fish. No wonder it is part of the basic curriculum in Chad-school.

You can be that guy. And it’s not about the looks, bros. It’s the skill.
And guess what the word  sew is directly related to.
It’s Kama Sutra. Look it up, if you don’t believe me.
Shakespeare nailed it back a few hundred years ago:

“He who wants to sow, ought to know to sew.”

So yeah… sewing definitely a skill worth learning.
And the German word for it is also nice to have, because I believe that to truly know a language, you also need to know some random fringe words that you maybe use once a year. And also because it has some nice relatives.

But let’s start with nähen itself and look at a couple of examples.

This is pretty straightforward and also the prefix versions don’t need much explaining. zunähen and vernähen (technical sounding) are about the idea of closing, aufnähen is for a patch for example and and annähen is what you do with a button, for example.

Cool.
So that’s the verbs, but of course there are also a few nouns.
First up, we have die Naht, is basically the result of nähen… the seam.

And the next one is the tool that we need if we want to do some nähen, which is called die Nadel. And yes… that is totally related to the English needle.

And needle is not the only English relative. Most of you probably know this certain plant, that when you touch it, it makes your skin burn. Kind of… like a bunch of needles.
No wonder it is called (stinging) nettle and in German it is die Brennnessel (“the burn nettle”).

And that’s still not all, because arguably the most important or most “prolific” member of the family is the word for the very thing you’re on right now… the net, or das Netz in German.

Nähen, die Naht, die Nadel, die Nessel und das Netz…. pretty nice family, right?
So where does it all come from?
Well, the origin is the disgustingly ancient Indo-European root  *(s)ne- and this root was about twisting, turning, twirling … just think of a string or a cord.
Oh and by the way… the origin of word sew and seam is another Indo-European root *syu-, which was about binding and sewing, and which is also the origin of … drumroll please… the Sutra in Kama Sutra. Look it up, if you don’t believe me. I told you sewing is sexy.

Anyway, so the family of nähen comes from a root that was about twisting and twirling and the perfect mental image for that is a string or cord… you know… these twirled ones.
And that brings us to the last member of the family, die Schnur, which is the generic word for a cord or string that is made from fabric, but not as big as a rope. Actually, the yarn you use for sewing is usually called Zwirn… at least the really fine one.
But while Schnur  itself is maybe not all that useful in daily life, I’m sure you’ll see some of its idioms and relatives sooner or later in everyday speech.

And that’s pretty much it for today.
Hooray.
This was our quick look at the family of nähen and I really hope it wasn’t as boring as you initially thought.
As usual, if you want to recap a bit and see how much you remember, just take the quiz I have prepared fo… oh wait, it’s Summer, Sun Vocab fun edition. So no quizz! Hooray for me, oh no for you :D
Seriously though, of course, if you have any questions or suggestions, just leave me a comment.
I hope you liked it and see you next time.

nähen = to sew
die Naht = the seam
nahtlos = seemles(ly)
die Nadel = the needle
die Brennnessel = the stinging nettle
das Netz = the net, the web
die Schnur = the cord, the string
schnurgerade = super straight
wie am Schnürchen = like clockwork
schnüren = to bind up, to strap (rare in daily life, except for shoes)
der Schnürsenkel = the shoe lace
der Zwirn = the yarn, the sewing cotton