Word of the Day – “liefern” 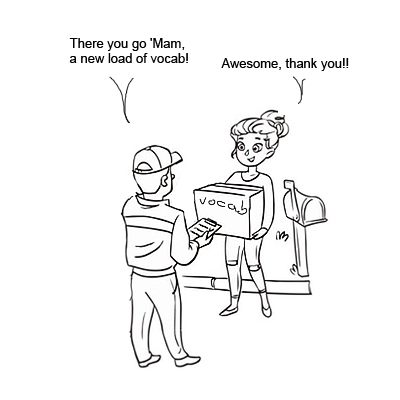 German Word of the Day time. Hooray.
This time with a look at the meaning of a  verb that happens millions of times every day. With food. And clothes. And books. And electronics. And furniture.
And fitness equipment like my new 40 pound kettlebell.
Man, the face of the driver when he took this little package out of the van… he was not happy at all. Hilarious. I gave 50 Cents tip, though, so I’m sure his back is okay.
So, today, we’ll take a look at


And I’m sure you’ve figured out, if you didn’t know it already – liefern means to deliver and it’s what unites us all, no matter the skin color, the gender, the age, the income and who you have the hots for. No matter whether left wing or right wing, liberal or conservative, mask or no mask, cat person or dog person – the one thing we all agree on is Deliveralism – setting us free from having to go to the store like a serf.
And if you think this was just a dumb pun… well… it wasn’t.
Because liefern, delivery  and liberty are actually related.
*Jeff Bezos has entered the chat

The origin of the family is the unforgettably ancient Indo-European root *leudh- . The core idea of this root was the notion of “grown up, tall” and based on that it was also used to refer to people.
And if you’re like “Hmm, this root looks weirdly familiar.” then you’re on to something. Because it’s actually still alive to this day in a German word you’ve probably seen many times already: die Leute.
Which is a slightly colloquial word for the people, the folks.

And this means that Leute is actually a direct relative of the English word eleutherian. OMG… I literally have never seen that before.
It’s straight from Ancient Greek apparently, where the word eleutheros meant as much as “free man”. And this notion of freedom then became the main focus of the Latin branch of the family around the word liber (free).

And that’s also where the word to deliver is from which originally meant something like to liberate, to set free. And this meaning is still alive in modern English.

Not in German, though. The word you need for this deliverance is erlösen.

German liefern would sound REALLY strange here, because it has lost the old meaning completely and instead now delivers full time.
And the big question is of course, how we get from liberating to delivering some food.
I mean, as I said in the intro… delivery services do deliver us from having to go to stores, so that would make sense. But the meaning is around way longer than the internet or food delivery.
The real connection is that when you deliver something, you technically “give it out”. You “free” it, if you will.
Like… my poor PlayStation, which is currently being held captive by Amazon and they demand $499 as a ransom. Don’t worry, little PlayStation… hang in there. Just a few more sign ups and I’ll get you home.
So yeah… from setting free, to handing over to delivering. That’s roughly the progression. And while English has kept the original sense as a side meaning, German liefern and the related words are ALL about delivery.
And I think it is high time I… ahem…  deliver some examples :)

Not much to say here, and the related words are pretty clear as well.

Pretty straightforward, I’d say. But there is one important caveat: liefern actually DOESN’T work in the context of delivering messages or information. For an old school real life messenger, the word would be überbringen, and in context of digital messaging, you might see übertragen (to transmit) or übermitteln or empfangen (to receive) or even senden. I actually have a hard time telling which one is the best or most common. But definitely NOT liefern. That would sounds really strange. Like a truck drives up and dumps the WhatsApp message in the driveway.

Which is not to say that liefern doesn’t have abstract uses. It does. Particularly as an alternative for to give, to supply.

But I think these are pretty easy to make sense of, as well.
The only use that might be a bit confusing is the phrase geliefert sein, which means as much as being screwed, toast.

But this also makes sense of you think of it in terms of doing something bad. Like… I “broke” the deadline and I’ll be delivered to “the authorities”.
And this brings us right over to the prefix versions of liefern. Because one of them is about a very similar idea.

The Prefix versions of “liefern”

So, the first one is ausliefern and one of its uses is as a variation for pure liefern with a focus on getting the things “out”. Like, the destination doesn’t really matter, what matters is that it leaves the stock. But unless you’re working in logistics, the more likely meaning for you to come across is the one that’s a bit more in line with the older sense of handing out or handing over. Because ausliefern is also the German word for to extradite and to hand over. The actual translation actually depends on context, but the core idea is always that a person is “given” to some higher power.

Cool.
Next up, we have abliefern, which is again a variation of to deliver, but this time with the focus on the “end” of the delivery. The moment when you pass it on. It’s a pretty technical term, actually, but you still might see abliefern in daily life, though, because it is also used in the context of someone’s performance.

Then, we have überliefern, which is basically is about “delivering” information across time – but only in an epic context, like passing on some ancient wisdom or a tradition or something along those lines.

And then, holding down the fort for the codependent prefix verbs, is beliefern, which is a pretty “logistics” sounding term for supplying someone with something.

And I think that’s it, for today.
I mean, there’s a couple or so more prefix versions, but they’re really technical and you can definitely get them from context. And this is already boring enough, so I’d say let’s wrap it up while we’re still awake.
This was our little look at the origin and meaning of liefern and I hope it delivered :).
As usual, if you want to recap a bit and check if you got the most important points, you can take the quick little quiz I have prepared for you.
And of course, if you have any questions or suggestions or I have forgotten an important word, just leave me a comment.
I hope you liked it and see you next time.

liefern = to deliver (NOT in the sense of “freeing”, and not for delivering messages)
der Lieferant = the delivery person; the supplier (For goods, not for utilities.)
die Lieferzeit = the delivery time (Time at which it is delivered, not the time it takes)
die Lieferung = the delivery (NOT in the sense of someone’s performance)
lieferbar = in stock (“Can be delivered”)
abliefern = to drop off (“to deliver” with a focus in the handing over. Rare.); to put out, to do (In a figurative sense of someone’s performance)
ausliefern = to deliver (With the focus on getting stuff out from the stock. No specific destination); to extradite; to give to, to surrender to (In the sense of giving into the hands of some power. Usually used for people)
einliefern = to admit someone (Basically, deliver someone to a place where they’ll stay. Used for hospitals and jails.)
beliefern (mit) = to supply with (For goods and utilities. Sounds technical.)
überliefern = to pass on (ONLY in the sense of passing on knowledge over time. Like old wisdom or traditions.)
der Zulieferer = the supplier (A term used in logistics for someone supplying parts to a business. NOT for food or utilities.)
mitliefern = to supply “along”, to include in the delivery (Think of batteries being included with a lamp for example.)