The meaning of “der Kummer”

We'll take a look at the word "der Kummer", its cool compounds and the verb "sich kümmern um" (to take care of). It’ll be cumbersome… I mean, it’ll be fun :) 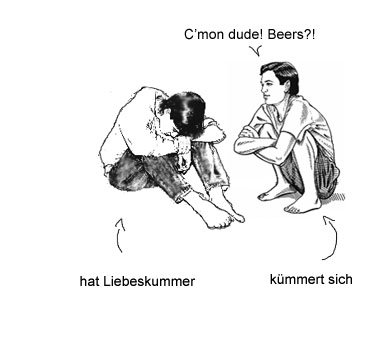 Kummer is related to the English stem cumber. Not the cool cumber from salads and sandwiches that we nerds know as  “Cu2MBER”.
I mean the bad cumber known from words like encumber or cumbersome.

The origin of Kummer and cumber is most likely an French word that was about blocking the path with stuff. And soon it also took on a bit of a notion of hardship that can come with a blocked path.

“Through the mountains?? That path is rather cumbersome, my Lord.”

Later this broadened into a more general idea of hindrance and nuisance and that is pretty much where the English cumber is today.
The German der Kummer on the other hand lost the whole notion of blocking and eventually it became a word for what you feel when faced with hardship. Woe, grievance, sorrow… all those and more are listed as translations but I think heartache is probably the best match.
Examples…

The little poem is called “Das Bürgeramt” by the way :).
Now, Kummer by itself isn’t that common anymore and especially younger people don’t ever use it in daily life. But there’s a really important compound with it that is uber common, ESPECIALLY among younger people. I am talking about Liebeskummer –  is THE German word for what you feel when you’re lovesick.

And the second example brings us right to another Kummer-compound. It’s by far not as common as Liebeskummer, but it’s a really nice word. I’m talking about der Kummerspeck. Literally, we could translate that as “woe-bacon” and it’s essentially what you’ll get from emotional eating.

There’s also Kummerfalte, which is a wrinkle in the face that you get from worrying too much and Kummerkasten, which is a cute name for a suggestion box but yeah… the word you’ll really need to add to your active vocabulary is Liebeskummer.

But that’s not the only reason why we’re talking about this. The real treasure are the related words, or more specifically… the verb.
Of course. It’s always the verb, isn’t it :).

“kümmern” and other related words

The verb for Kummer is kümmern. A few hundred years ago, the core idea was something like “to give Kummer”. And this meaning is actually still alive, though in a “weakened” version… like… giving a headache instead of a heartache.

This use is kind of rare though. The kümmern you’ll see in daily life is the one with a self reference – sich kümmern – And that means to take care.
How does that connect to what we learned so far?
Well, the meaning is actually not that far fetched. Do you have a guess?
Let’s say, there’s a problem. It’s not necessarily yours but as soon as you decide to take care of it, you kind of take the mental burden of it on yourself. You’ll have to think about it, find a solution for it, work it out. You encumber yourself with it. The only difference of that to sich kümmern is that the focus of sich kümmern is not the burden but instead of the actions you’re taking.
In other words, sich kümmern changed from making yourself worry to taking care –  which by the way is very much the same shift of ideas that happened with sorgen (I’ll add a link to the article on sorgen below).
The verb has lost the notion of worries pretty much completely and today it has a very active, often positive vibe to it.

Yeah…  the last one doesn’t make any sense. I just thought it sounds nice :). As you can see from the examples, sich kümmern can be used in context of mere tasks as well as in a more personal sense of taking care of a living being.  It is super common in daily life and you’ll definitely see it sooner or later.
Cool.
Now, there’s also a couple of prefix versions for kümmern. Bekümmern, which is pretty much about putting worry on someone but is not common at all  and if you ever see it, you’ll get it from context. The other one is verkümmern and this one  is about the idea of withering.  Seems a bit random at first but it makes sense. When you’re constantly full of worry and grief, that’ll be bad for your health and your charisma. Like… depressed people do not have the same energy as those who feel great. Verkümmern, with the away-ver just kind of take it to the extreme. You “woe away”, if you will. Or you could think of it as “getting into a state where other start worrying about you”.
Anyway, here’s an example.

This idea of small, low energy is also the core of kümmerlich, which means puny, scrubby.

But it’s not very common either.
All right.
Of course, there’s more we could talk about. For instance the famous German Schnaps Kümmerling and whether it got its name because it is a small drink that takes care of our woes. Or if Benedict Cumberbatch really means  “blessed heap of grief”.
But the best stories are those that leave open ends (#BULLSHIT) and I think we’ve done enough for today :).
This was our look at the word der Kummer and the main takeaways are definitely der Liebeskummer and the verb sich kümmern.  As always, if you have any questions about this or if you want to try out some examples for me to correct, just leave me a comment.
I hope you liked it and see you next time.