A fun look at the meaning of "haft" and its family. A ride that'll take us from a jail sentence all the way to a stapler pin. Ernsthaft?! Yup, ernsthaft :) 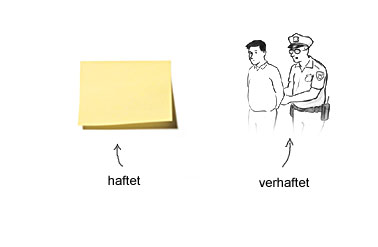 and welcome to our German Word of the Day. This time we’ll haft a look at the meaning of

Oh wait, I mixed it up. How stupid of me. I meant to say we’ll haft a look at the meaning of

What’s that?
A siren.
Oh no, it’s the Bad Intro Police! They’re coming to arrest me. No fair! I ain’t going back to jail. I’m gonna hide inside the look at the meaning of

Phew, got away just in time :).
So, we’ll talk a bit about the haft-family today, and maybe you caught on to it in the intro already – haft is related to have. The very origin is the super mega turbo ancient Indo-European root *kap. And just in case you’re confused how a k can change to an h… the two are actually not that far. Just think of a Russian accent for example. The h is more like ch there, and from that it is not very far to a k. Here, let me try and show you… I’ll go from hallo to kallo :)

Not sure if you can hear it but they’re definitely on the same “line”, if that makes sense.
Anyways, the core idea of the root  grasping seizing and it’s the origin for a whole bunch of words like capture, catch, hawk, heave, accept  or perception. In fact, English actually even has the word haft as in handle of a tool.

The German haft has more to do with capturing and catching though, because one of its main contexts nowadays is… jail.
There’s the verb verhaften which means to arrest (in a police sense)… the police grasps the robber… they “have” him. And there’s the noun die Haft, which is abstract noun for being in jail or arrested and it’s part of a whole lot of compounds.

Thomas has a new job by the way… some start up or something. Sounds really weird.
Anyway, jail is not the only context for haft-words.
They also can express a broader sense of liability. Here are two VERY common examples from daily life.

And the first one is a VERY common form of a company; I think it’s somewhat similar to a limited (ltd) and the second one is a phrase you can find for instance on the fence of a construction site to make it “official” that parents have to pay if their kids … I don’t know… topple the crane or something. The parents would need a good Haftpflichtversicherung then. And don’t gimme that “Uh, word sooo long”-whine. Third party liability insurance is not much better. It actually has more syllables. It’s just that in German the parts stick together.

Oh and speaking of sticking… that’s also an idea that can be expressed by haft-words.

Hmm… shouldn’t that force be called An-der-Waals-force?!
Get it, get it… because it makes the gecko stay on the wall? 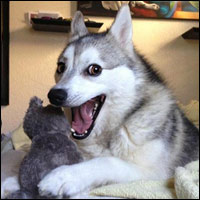 … … …
uhm… yeah… I uh… let’s just move.
The words we’ve had so far were okay but nothing overly fascinating. What makes haft REALLY useful is its use as and ending.

Let’s start with a few examples.

And let’s continue with a few more examples.

And let’s wrap up the section with a few examp… okay kidding. Of course we need to take a closer look at that. Did you get an idea of what -haft does as an ending? If you didn’t, then don’t worry, it’s kind of hard to see with these examples that -haft actually expresses a similar idea as -full or -some. If you say that something is x-haft, then you’re saying that it is like x or has x in it.
And why? Like… what does that have to do with the haft we had?
Well, it’s the idea of of sticking. The “quality” of X, the characteristic sticks to the whatever you call x-haft. Like… if jealousy is krankhaft, then the quality of sickness sticks on the jealousy.
Or actually, remember the connection to to have? If the weather is traumhaft, then it has some quality of dream to it. If your flatmate’s desire for a clean kitchen is zwanghaft is “has compulsion”. Does it make sense?
Cool. There are quite a lot of really common words with -haft and if you haven’t noticed so far, you will now see them everywhere.
But -haft is not as flexible  when it comes to inventing new words as -mäßig, which can have the same function. You can try and invent new words with -haft, and you’ll probably be understood but there’s a fair chance that it won’t sound native-haft ;). Like… batman-mäßig sounds fine, batman-haft will be understood sounds a bit odd.
Cool.
So now we know haft in its different forms, and we could just wrap it up here. But that would mean missing out on a nice little connection. You know…  one of those connections that are hidden in plain sight and that make a native German speaker go like “Oh wow, this word is related to haft?! That is so cool. Do you wanna have sex with me?” **
I mean… who wouldn’t want to know what “this word” is. So let’s take a look.
(**Reaction dramatized. Native speaker might not propose intercourse in response to being told the connection)

We’ve learned that haften can be about sticking to something. Heften is kind of the causative version of that. So it’s about making something stick to something. The verb itself isn’t used much though except in the context of  paper.
A Heftklammer is a word a stapler clip, abheften and einheften are about putting paper into a folder and most importantly, there’s the noun das Heft. Heft can translate to booklet, magazine or notebook but in essence a Heft is a bunch of paper stapled together in a book-like way, but not as thick.

And then there’s Heft as part of a common idiom.

And here, we’re not talking about a notebook. This Heft is the counterpart of the English haft (handle of a tool) – nowadays usually called der Griff – but in the idiom it’s still alive and the phrase means that you take charge of a situation. You’re calling the shots.
Two more Tequilas please! Double!
Now you might be like  “So you’re saying if I tell a native speaker that Heft is related to Haft, they will want to have sex with me? That’s hard to believe, Emanuel.”
Well, first of all, I never said that.
Second of all, if you call enough shots, they might.
And third of all, the real surprise connection, the one that makes people go like “Oh wow!” is not the word Heft – it’s the word heftig and the core idea of that is high intensity.

And it’s also used as a sort of slang choice for crazy in the context of crazy events.

Now, we should be a bit more precise and say it is about high intensity with some notion of disturbance or violence in it. Because heftig wouldn’t work in the context of an intense, deep eye contact. Maybe think of an earth quake. That’s a good example for something that can be heftig.
And now the big question is of course: what? I mean… what does the core idea of haft, the idea of sticking, grasping have to do with intense wind.
Well, it’s the notion of strength. Heftig used to express stuff like stable, steady, persistent. That implies a certain forte and over time the word simply lost the notion of steady.
Tadah. Well, takes a little mind bending but nothing too heftig ;).

And that’s it for today. This was our look at the family of haft and as we’ve seen it has quite the…
“Are you Emanuel?”
Uh… yes.
“Sir, Agent Colter my name, BPPD. You’re under arrest.”
WHAT? Oh… oh no, the bad intro police, they found me.
“No Sir, we’re from the Bad Pun Police Department. You’re accused of committing two particularly bad puns, namely An-der-Waals force and using the idiom ‘calling the shots’ followed by the word ‘Tequila’. And additional charges of TUI … teaching under the influence of red wine. Please step away from the microphone and come with us.”
And I’m being arrested for puns?!?! Das ist heftig!
“Sir, please come with us or we’ll have to handcuff you.”
Damn it. I gotta go…  if you have any questions or suggestions or if you want to share how native speakers reacted to the reveal that haft and heftig are related, just leave me a comment.
I’ll be back.  They got nothin’ on me. #freemanuel.

der Griff- the handle of a tool/weapon, the haft