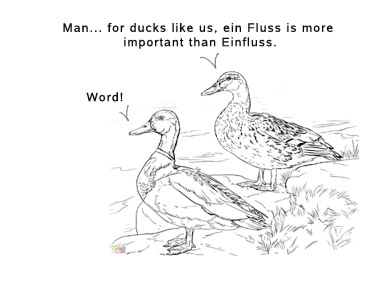 Sounds like a boring topic. Fluss means river; most of you know that, I think. And who wants to read about Fluss? I mean, except a Flussologist (riverologist in English, in my fantasy version of it anyway).

But Fluss is not just a river, it’s a stream. A stream of useful words and in that stream many surprising connections dwell.  So let’s go fishing. Or better yet, let’s dive right in.
Splashhhh.

The crazy family of Fluss

The word Fluss is obviously not related to river. River comes from some Latin word that was more about the riverbank but there aren’t any interesting connections to anything. Well, except the word rival, which comes from the idea that someone uses the same stream as you to water their field.
The family of Fluss on the other hand is just crazy. At the heart is the uber ancient Indo European root *pleu. The core inspiration was running water and the root has evolved into many words that are somehow related to that idea. In English, we have flow, float, fleet or flood. These ones are quite obvious but there are more. For example to flee, which ties in with the speed of running water, I guess. And then there’s to fly. Sounds crazy, but just think of an eagle in the air…. that does look a lot like floating.
On the German side, we have essentially the same words, just in German: Die Flotte (fleet), die Flut (flood), das Floß (the raft) and die Flosse (the fin of a fish) and of course also fliegen (fly), fliehen(flee), Flug (flight)  and Flucht (flight, escape). Oh, and of course also the Romance languages have their bunch of pleu-words. There’s the branch around flux and fluid (which also exists in English) and there are the words for to rain – pleuvoir in French, piovere in Italian – and you know what.. this actually ALSO made it into English: pluvial. Man, English is such a Latin fanboy. I have never heard pluvial anywhere but apparently it means related to rain or characterized by rain so I guess this is how you would use it.

Meh… maybe not.
Anyway, so this is the fascinating family of Fluss. Now let’s get to some cool, useful Fluss-words.

Let’s start with Fluss itself. We know that tt can mean river. But it can also means flow.

Now, I think we should mention, that in recent years, the word flow has started to enter the German language in some areas. In context of music you wouldn’t say “Fluss” , you’d say “flow“. And in the working world people will likely say work flow and instead of Arbeitsfluss and flow chart instead of Flussdiagramm because… you know… it’s just so much cooooooler.

Anyway, back to Fluss-words. There are 5 in particular that are really good to know. The first one is der Abfluss.
Abfluss expresses the general idea of something flowing away from somewhere. The reason why it’s so useful however, is the fact that it’s THE word for … the drain, as in kitchen drain. The  “off-flow”.

The second super useful word is der Einfluss. Literally, it would be the “inflow” and that’s just a step away from the actual meaning: influence. I think I don’t need to mention where fluence comes from :).

Of course, there’s also the verb to influence: beeinflussen. And yes, that’s more complicated than it needs to be and yes, the double-e does look a bit funny.

All right.
The third super cool and super useful Fluss-word is das Überfluss. Literally, it me… what? Oh you want to know why it’s das and not der even though it’s der Fluss?  Well, you’re totally right. It’s der Überfluss… I was just testing you ;). So, literally der Überfluss is overflow.  It’s not used in the literal sense of stuff actually spilling over an edge but the idea of too much is still totally in there. Überfluss means abundance in sense of more than needed.

More common than the noun is the adjective überflüssig and this one actually has a literal translation… drumroll please…  superfluous. Super like über and fluous is a variation of fluid.
In practice überflüssig is used for quite a range of English words (dispensable, gratuitous, unnecessary,… ) but the idea is always the same.

Of course, flüssig also works on its own. And I think by now you can already guess what that means… exactly, it can mean fluent, fluid or liquid. And the noun is die Flüssigkeit and means the liquid or the fluid and I have to say… I really don’t understand why English uses different words here. I mean, it’s one idea and I think having different words for it,  is confusing and makes it hard to learn the langu… what? … ohhhhhhhhh… right. Sorry, I forgot I’m teaching German. I really should shut up about two words for one thing.

Cool.
Now, all we’ve seen so far was based on the noun der Fluss. But of course we also need to mention the verb…. fließen.

Fließen is what water and other liquids do… to flow, to run. But of course it’s used in a bunch of more abstract contexts, too. For example for electricity, money or thoughts.

The more abstract  fließen is by far not as common as its English brother to flow, though. Like.. you wouldn’t say that a meeting fließt or that a story fließt. That’s just not idiomatic.

Prefix-version-wise, fließen is rather soft on us. Sure, there are some but they’re not that useful and  I think you can understand all of them when you see them in context.

A nice compound is das Fließband which is much more descriptive than its English translation assembly line. A flowing strap.

And of course we need to mention  fließend which is what all language learners want :)… “flowing” or fluent.
Actually, fließend is more like fluently.

Oh, and then we mustn’t forget the word fluency which is quite the buzz word in the language learning community. You know all the ads and titles:

So what’s the translation for fluency? The answer is … hold on.. that’s weird… no word? There HAS to be one somwhe…
“There isn’t!”
What??? Hello? Who.. who said that?
“It is I, you idiot. German. And I don’t have a word for fluency.”
But… you have a word for like… everything.
“Not for this?”
But why not?
“Because people cannot reach fluency in me. I’m too difficult.”
No, you’re not. I know plenty of people who have learned you and reached fluency.
“That’s impossible.”
No, it’s not.
“But … what about all my genders and my endings.”
People can master those.
“Oh they do?! Then… then I’ll add more genders… yeah, more genders. From now on there’s also do and dun. Yeah, and I’ll add a new case, as well. The Confusative. And I’ll add exceptions and …”
German! Calm down… why do you always have to pretend to be so tough?
“I don’t know… “
Have you been drinking?
“A little. I… uh… Someone on the Internet said I’m so harsh and clunky. And that made me sad. And angry.”
It’s okay German, many people really like you.
“Oh… sob … really? People really want to learn me? “
Yeah, trust me. Now go home and get some rest and then maybe come up with a word for fluency, okay?
“Okay… I’ll do that. Say hey to the students for me, okay.”
I will.

Wow… that was strange. Maybe it’s time to get out of the sun. But I think we’ve bathed in the river enough for one day anyway, so let’s get out and drink a beer at the riverside and reminisce about all the words we’ve learned :).
This was our German Word of the Day der Fluss. Many know it as river, but the core idea is flow and the translations for many of the cool Fluss-words like Einfluss or überflüssig are actually directly related to Fluss. Check out the vocab section for all the words we had today and some more, and as always, if you have any questions or suggestions just leave me a comment.
I hope you liked it and see you next time.