The difference between "anfangen" and "beginnen". Preceeded by a lot of cool info about "fangen" and its prefix versions and what WIFI has to do with girth. 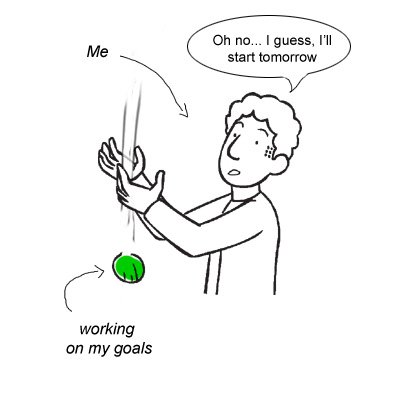 and welcome to our German word of the Day. Today, we’ll take a look at

And that of course includes all its prefix versions, one of which is anfangen, which means to begin, which is kind of a weird meaning once you know that fangen means to catch, which is easy to remember if you mentally connect it to fangs, which are these long pointy teeth of an animal that they use to catch prey.
My writing in 2020, ladies and gentlemen. #bad #poor. I hope you like it.
Anyway, let’s jump right in.

So yeah, fangen is the German word for to catchand it’s related to the English fang, but that’s by far not the only connection.
The origin is the now in 2020 more ancient than ever before Indo-European root *pag, which meant to fasten, fix. And this root grew into a quite impressive word tree. Pact, compact, pacify, appease, peace, pay– all these words come from Latin and are they share the notion of some sort of binding, fixing, having a bond.
And that’s not all. Also pole is a member of the family, based on the Latin palium which is fixed thing you fasten something to.
But the REAL surprise is the word travel.
Travel is actually a direct offspring of the French word for work – travail.
And no, NOT the whole “#Travelling is my job.” Instagram travel influencer travelling. The reason for the word is that travelling was actually quite strenuous a couple of centuries ago. But the best thing is the original meaning of the word travailitself, which is… to torture.
No wonder the French are so lazy.
Ohhhhhhhhhhhhhhhh… I’m joking of course!!!
The origin of the word travail is the Latin word tripalium. This literally means “three-pole” and it was a kind of cross made from three wooden poles to which someone is fastened for torture. So there you have it… the original sense of travel was to mean torture. You heard it here first.
Can’t wait till I see it in a video of a travel influencer complaining about the downside of travelling… like

“Oh my Gawd, you guys, story time! You know, I LOVE travelling, I love being a full-time traveller, it’s literally my passion, but it’s not always that awesome… did you guys know that travel originally meant torture? This restroom at that hostel really showed me that this can still be true today….”

Anyway, so we’ve learned that the origin of fangen is a root that was about fastening, fixing and with that in mind, it makes perfect sense that fangen means to catch.

Not much to say here. And also the related nouns are pretty clear.

What’s important to note is that fangen implies that something is“on the loose”. So it doesn’t work as a translation for to catch in the sense of “surprisingly find”. The proper translation there is erwischen.

Now you’re of course all like “OMG, that hussy. How can she do that to Thomas?” But don’t worry. He just caught her cheating on her diet. She went vegan a few weeks ago, just to try it out and see how it goes. From what I’ve heard she has a LOT of gas at the moment. Europe is even considering a new pipeline to be less dependent on Ru… anyway… uh… back on topic.

The prefix versions of “fangen”

Now, most of you probably think of anfangen right away, and it is the most important one. But there are a whole bunch of others and they’re actually all pretty straightforward variations of the basic theme of catching. In fact, their translations are often the same. They just each have a slightly different focus, so let’s go through them together.
First up, we have einfangen. The ein- adds some kind of a vibe of “putting inside” and the result is a focus on capturing to keep, caging.
One context is animals but it’s also used figuratively for vibes and moments.

Next up, we have auffangen and here the focus is not about preventing an escape but rather a “rescue” from falling or disappearing. A really good example is a hand catching a falling bottle, but it’s also used in the context of collecting.

Again a little different is abfangen, which has a focus in intercepting. You’re catching something, but not by chasing it. You just wait till it “passes by” and seize it.

Of course, we also have to mention umfangen. The verb itself is about holding from all sides, and in tacky love novels, it’s used as in the sense of embracing.

The verb itself isn’t all that common, though, so DON’T add it to your vocab lists. What you WILL need is the noun der Umfang, which literally means girth, circumference but which also expresses a more general idea of

And last but not least, we have the nonseparable verb empfangen. This one is actually pretty useful and it doesn’t only sound similar to umfangen. It also has a similar notion. The prefix emp- we’re looking at here is technically a version of in- but the focus here is taking something into your arms because empfangen means to receive. Think of someone receiving a big package, if you need a visual image, but empfangen is just as broad as to receive is, so you can find it in a whole bunch of contexts. The verb sounds a bit too fancy for a lot of contexts though, so the related words are more common here.

Now, admitedly, der Umfang and der Empfang did require us to do a little bit of mind bending to connect them to the core idea, but it was nothing crazy.
So it seems that anfangen, the most important one of them all, is the only one that’s really twisted.

At first glance, there seems to be no connection between anfangen and its meaning of starting, beginning.
But all you need to do to make sense of it, is to think of the verb to tackle. Tackling has an element of capturing to it. Just think of a safety tackling a wide receiver in American Football. And now take the phrase to tackle a problem – that does have an element of initiation to it. So both notions are present in to tackle.
I’m not saying this is a perfect match. But that’s more or less how anfangen changed from the idea of catching to the notion of starting. People first used it in a metaphorical sense of “catching hold” of an issue in order to work it out, and then later, it completely shifted.
So, now that we know why anfangen means what it means, let’s use the rest of this post to answer the question you are actually interested in: the difference to beginnen. And to see a few examples, of course :).

“anfangen” and “beginnen” – What’s the difference

Both verbs mean to start, to begin and many learners are wondering what the difference is.
Well, I’d actually argue that the main difference is… tone, or register.
Beginnen sounds more high brow, more fancy or formal. It’s by no means rare or limited to books or whatever, but I for one pretty much never use it in my normal day to day conversations. And no, it’s not because I sit at home alone and don’t have conversations.
I have many of them. Hundreds of conversations. Like… if you need a conversation, I can hook you up. Really good stuff, too. 100% beginnen-free.
Seriously though, all the examples I can think of sound more natural with anfangen to my ears.

Actually, the second example just made me realize that part of the reason why anfangen sounds more natural might be because it’s a separable prefix verb. So in present tense, we have this little arch and we get to put this satisfying little thing at the end. #fulfilling. I know you all don’t like this, but German native speaker brains actually like this flow.
Anyway, so yeah… in normal daily life, anfangen is the more natural choice, and the more mundane and petty the context, the less fitting beginnen would be. Like… it would sound really out of place in the following two examples.

Beginnen is more fitting for bigger, epic contexts or in formal writing.

And it’s kind of similar for the nouns. Der Anfang is more common and more broad. And in addition, the noun der Beginn is limited to the context of time. So you can’t use it for the starting portion of a race for instance.

Now, all this is just a guideline, mind you, so don’t take them too literally. Some Germans just might have a special liking to beginnen and there are certainly lots of little idiomatic phrasings out there that kind of contradict what I said.
It’s not that big of a deal, anyway, so don’t spend too much energy trying to be super idiomatic.
My suggestion is to just stick with anfangen for the Anfang and then start sprinkle in a few beginnenif you got some Sprachgefühl.

Cool.
And I think we’ll leave it at that for today :). This was our look at the family of fangen. The original notion is fastening and with the exception of anfangen, it was pretty much visible in all the related words even though the translations range from girth to jail.
If you want to check how much you remember, refresh it and learn a couple more related words on the way, just take the little quiz I have prepared for you.
And of course, if you have any questions or suggestions or you’ve found a different explanation for the difference between anfangen and beginnen somewhere, and you think it’s worth discussing, just leave me a comment.
I hope you liked it and see you next time.

This entry was posted in A-Level, Broad Vocabulary, Must have words. Bookmark the permalink.
Subscribe
110 Comments
Oldest
Newest
Inline Feedbacks
View all comments