Word of the Day- “einfach”

A quick and easy look at the real meaning of "einfach" and how to use it as "easy" and "just". Special guests: a few other fach-words. 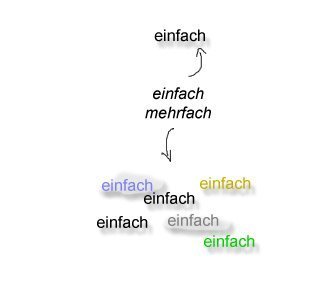 Now some may say: “Oh, that’s easy….”
And you are right.
Einfachcan be easy. But not always.
Dun dun dunnn.
So let’s see what’s going on.

And we’ll actually start with a little room tour. Imagine you’re looking for a room and the people give you a little house tour. And in the kitchen they show you the fridge and they say…

This means that everyone get’s one shelf in the fridge. Because the noun das Fach can actually mean shelf. And in context of school, it’s the word for subject. Math for instance is a Fach. And I know what some of you are thinking right now. “Damn right, math is a fuck.”
And it’s a very compelling similarity.
But that’s not actually the origin. Fach comes from an old Germanic root that was about compartementalized space. At first, it was used by craftsman and fishermen, but it slowly took on figurative meanings as well. Like the Fachas in school subject or the Fach in Fachmann, which is is a word for expert – someone who knows this “compartment” of skills.
How does that relate to einfach, though?
Well, in English, we have words like twofold or threefold. It’s kind of rare now but it was a really really common way of counting instances. How many folds of something do we have, how many layers, how many instances. It’s a bit of mind yoga, but I think it makes sense.
Now, German has the exact same with the ending -falt. The word Vielfalt for instance means variety, multitude to this day.
And at some point people started using -fach the exact same way. It had a sense of compartment, so that’s not too far fetched. And -fachactually got way more popular and we still use it to count “items” today.

Now, just to make sure, though… the -fach ending kind of only works for stuff that can be “stacked”.
For events that are repeated, using “x mal” is the safer bet.

Maybe it’s best to think of the -fach ending as layers.

Here, we pay “two layers” of the base, if that makes sense.
And this notion of layers is the perfect key to the meaning einfachhas today. Because based on that, einfach then basically means “one layered” and that’s really not that far from the idea of not sophisticated, not complicated. Or in other words… easy, simple.

Actually, I’d say simple is the better match for einfach. Yes, einfach can mean not difficult, but all the other notions of easy like easy-going or taking it easy or easing into something are NOT covered by einfach. Easyhas a core of lightness, einfachhas simplicity.

And thinking of einfach as simple, also makes it clear why it’s also really commonly used in sense of just.
Because just can be a synonym for simply.

There might be small differences in tone, but I think overall just and simply are synonymous in these examples. And in German, they’d both be translated with einfach.

Here are some more examples…

And here we have both meanings back to back.

And that’s a fact.
I think, these might be confusing if you think of einfach as easy. But there’s no problem if you think of it as simple.
And you know what else einfach and simple have in common?
They’re LITERAL translations, and cousins.
The word simple comes from Latin simplex. And simplexis a combination of sim and plex.Simcomes from the incredibly ancient Indo-European root sem that was about one-ness and we also have it in words like similar or single. And -plex comes from the equally ancient root pel… which just so happens to be the root that fold and Fach come from.
Yeah… you can find out a lot when you’re stuck at home with nothing to do :). If you want to know more, just try looking up the origin of homo sapiens. You’ll be surprised.

Anyway… berfore we wrap up, let’s have a look at some words that are based of of einfach.
Die Einfachheitis the corresponding noun and it means… simplicity.
It is not really a word you need much but German has one fixed expression with it that is kind of common… der Einfachheit halber.

Sorry… I couldn’t come up with an more simple example.
There is also the verb vereinfachenand you will be not surprised to hear that it is …. to simplify.

So… one last thing I want to mention seems to be a quite special case but I think it is a possible source of mistakes.
So if you speak in imperative form, so if you give orders to someone,in German you cannot start a sentence with einfach, as you would start an English sentence with simply orjust.The verb has to come first for those sentences.

Aaaand… one even laster thing: the comparison forms.Here they are:

Try pronouncing the last one. It’s humbling.
Anyway, that’s it for today. This was our Word of the Day einfach and the main takeaway is that it can mean easy, but the better translation for einfach is simple.
If you have any questions or suggestions, just leave me a comment.
I hope you liked it and see you next time.