We'll take a look at the false friends "craft" and "Kraft" and how they got so confusing. And we'll explore the family of "Kraft" a bit and learn cool new words. 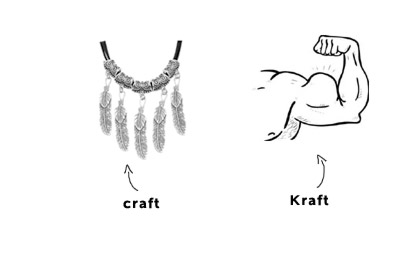 and welcome to a new episode of False Friends Explained – the series that’s all about false friends. Like Steve. Come on man, I thought we were buds!! You freaking knew I had a crush on her and yet you couldn’t help it but, … anyway, sorry guys… I just feel a bit lonely right now.
So, false friends special. And today we’ll talk about

Craft is at its heart about skill.  Carpentry can be a craft, or pottery, or writing. A craft beer is a beer that was brewed using hand work, skill and experience, and a crafty person is someone who is very smart and cunning.
Kraft on the other hand is not as refined.

It’s pure raw power.  It’s like… craft is like this British gentleman,  well dressed, well mannered, defeating you in a debate.  Kraft is a Germanic warrior, unkempt, clad in fur, choking an elk while fighting Romans.
And by the way, I feel like even the sound mirrors the difference. Kraft, with the short a, just sounds much more powerful.
Anyway, clearly someone messed with the meaning of the word. So, who was it this time? German, English, both? My money is on German because German usua… what… oh…
.. it’s English, that screwed up.

The origin of the words is the same as for the words cringe, crinkle, crank and cramp – the super mega uber ancient Indo-European root *ger. The core idea of that was turning, bending and I think you can see that in all the words I just mentioned. And while we’re at it… the root is also the origin of the German word for sick/krank, which is based on the idea of someone not standing upright.
How do then Kraft and craft fit in there? As weird as it sounds, their original meaning might well have been based on the muscles curling. Just think of some buff Indo-Europeans flexing their biceps. So the original idea of the words was strength, power.
In English, this was then generalized to include mental power and then, slowly, sissified it… I mean, made it more about skill. Craft in the sense of a vehicle (spacecraft, watercraft) might be a leftover from the old power meaning but even that’s not one hundred percent proven.
Either way, the connection to power has largely been forgotten in English.
German Kraft on the other hand hasn’t changed much at all. It still is about strength and power.

And it’s a pretty damn useful word because it’s not limited to physical strength anymore. It works for a wide range of abstract forces or powers, it’s the proper physics term for force. Let’s look at some examples…

And there are loads of super useful compounds with Kraft.

Oh and not to forget the wonderful Kraftfahrzeug, literally “force drive thing“, is the bureaucratic word for car. I mean, why say Auto if you can say Kraftfahrzeug.
Now, of course there are also related words. The most useful one is probably the adjective kräftig which means strong (not crafty!!!) but there are some verbs, too so let’s look at some examples:

Cool.
So this is Kraft and the related word, and they’re all about power in some way. What about craft then? What is craft in German?
The answer to that is not “It depends on context”.
It is “It totally depends on context.”
Yeah, I know… that wasn’t well crafted.
But seriously, there are many possible translations for craft. For carpentry or bakery you’d say they are a Handwerk, as soon as it gets a little more artsy, like gold smith or making small carvings from wood you’d say Kunsthandwerk. But a master of his craft would be Meister seines Fachs  and an arts and crafts store would be called Bastelbedarfsladen or also simply Hobbyladen.

And then there’s the verb to craft. Dict.cc suggests anfertigen, von Hand anfertigen and that kind of works but they sound a bit dry, and not “crafted” as to craft. For a well crafted piece of writing you’d never say gut angefertigt. You’d say gut geschrieben, probably actually just gut.
I’m sorry I can’t give you a better answer but German just doesn’t really have an equivalent for craft.
But I don’t think you’ll need that very often anyway. Just make sure that you don’t use Kraft, because that would be really confusing.

And I think that’s it for to… oh wait. There’s a call. Lisa from Ohio, welcome to the show…
“Hey Emanuel, great topic but I have a question that keeps bugging me.”
Sure, go ahead.
“So, Kraft means power, strength and kräftig means strong. But I thought ‘stark’ means strong in German and Macht means power. Are they all synonyms??”
Pheeeeeeew, great question.

Who would win – Kraft, Macht or Stärke

Die Macht is power in sense of power over others or at least potential power over others. So Macht makes no sense for electricity for instance. But kräftigand stark... boah,  that’s a tough one. You… you can’t really use them synonymously, but I think it largely comes down to which one just happened to be idiomatic in a given context.

In the first one, stark is the idiomatic one and kräftig sounds odd but in the second one it’s reversed. And it’s the same for the nouns.

“Wow, that’s really messy.”
Yeah, it is. I feel like… a general trend is that the words without umlaut are more common and more often the idiomatic choice. So stark and die Kraft while kräftig and die Stärke are somewhat special. It’s by no means a rule or anything, just a little trend to go by. That’s all I can say here.
“Wow, Emanuel, you can’t translate craft, you can’t tell stark and kräftig apart… you really suck today.”
Oh… I … uh… I’m sorry
“Naaaah, just kidding. It’s cute how you apologized, though (snickering in the background).”
Haha… stop making fun of me. So… do you have any more questions?
“Nope, I think it’s all clear. Well, except what happened with Steve and that girl you had a cru….”
Hello? Lisa? Are you there? Oh, the connection was interrupted. What a pity. I  really would have loved to continue this conversation.
Anyway, time to wrap this up.

This was our false friends special on craft vs Kraft and while English craft is about skill and dexterity, Kraft is about strength, power and it’s much more useful than craft. The word, I mean. As always, if you have any questions or suggestions just leave me a comment.
I hope you liked it and see you next time.

bekräftigen – reinforce (by making a statement again)
entkräftet – exhausted
verkraften – cope with  something , get over something (for people, usually in a mental sense)
in Kraft treten – come into effect (for laws and such)

kräftig – strong, hearty (for food)
kraftlos – without power/energy (for people)