A fun look at the various meanings of "ausgehen" and what party night has to do with assumptions. Also: what's up with "rausgehen". 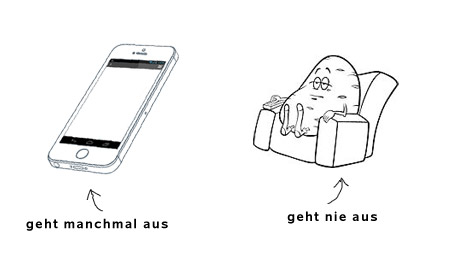 Just like English out  the German aus has the following two somewhat independent core ideas: outside-ness and off-ness. Today, we’ll see both of them in action, creating seemingly completely independent meanings for ausgehen.
But at their core, they’re not that far apart, actually.
So are you ready to jump it?
Then let’s go

And we’ll start with ausgehen as a translation for to turn off.

Clearly, this is based on the off-aus, but the gehen might seem a little bit weird to you.
Like… what does it have to do with gehen if I turn off my phone? Well, the answer is nothing because ausgehen is ONLY to turn off from the perspective of the thing.
Your phone can ausgehen, if the battery is empty, for example , but you cannot ausgehen your phone.
That would be ausmachen, then, but that’s another topic.
Still,  ausgehen is mega common in daily life and it works for a wide range of things, like a fire, a radio or a tap.

When the light goes out, though, I know where to find it. Because usually, it goes to that bar around the corner for a few Bud Light… haha.
Now you’re like “Is he drunk?!”. To which I say with absolute reassurance: kind of.
But my silly comment about the light going for a few beers was not just me being tipsy-silly.
It’s actually to show you how the idea of off and outside are connected – the both share a notion of “not being (in) here”.
When the kitchen light goes out, it’s not in the kitchen anymore. And if your flatmate goes out she’s not in the kitchen either.
Now, that of course begs the question whether ausgehen also means to go out in the local sense.
And the answer is yes… but…

ausgehen – a sense of exit

Ausgehen does mean to go out but ONLY in the sense of hitting the town. It does NOT work in the sense of simply leaving a building. For that you’ll need rausgehen. But we’ll get back to that later.
So, ausgehen is to go out on the town…

Now, even though this ausgehen is still kind of standard and all the examples are perfectly idiomatic, I feel like it slowly starts to become a little… dated. Or at least it gets kind an official tone.
Here’s a little overview over phrasings that people use instead.

I use all of the above at times, but not really ausgehen. You will definitely see it used that way but when you talk to friends I’d say don’t use it… it just sounds a tad bit too formal.
Now, going out is fun and all, but we all have those days where we’d rather chill at home and watch some Netflix or read a book.  And then, too, ausgehen is a good thing to have in our vocabulary. Because it can also mean to end in context of stories.

And we don’t actually need much mind bending to make sense of that.  The end of a story, the resolution is kind of the “exit” of the story. Just think of the phrase “to go out with a bang” – we have the same notion of ending there.
In practice, this ausgehen is only used in context of some kind of narrative or story.
So it’s NOT a general sense of coming to an end. A period of time or a subscription or something can NOT ausgehen.

Cool.
Now, the meanings we had so far are already enough to make ausgehen a word you need to add to your active vocabulary. But there’s actually another use. And that one is a little more abstract…

Yes, you rad that right. ausgehen can also translate to to assume. Seems weird and unrelated at first, but it actually makes a lot of sense, if we think of the idea we just had – the going out, exiting – in a sense of venturing out.
You see, assuming something is basically taking something as a reality for the time being. We don’t know it for a fact, but we treat it as the base from which to act and move forward.
The assumption is the point from which we venture out into the future. A working hypothesis, if you will.

And if you don’t really see the logic yet, just think of the English sentence “I know where you’re coming from.” It’s not the same, of course, but it also talks about a persons point of origin in a metaphorical sense.
Here are a few more examples…

As you can see, the translations vary a bit, but the idea is always the same.
Oh and I guess I should also mention that German has a second word for to assume: annehmen.
They’re really similar but I think annehmen sounds a little less poised or expecting. We’ve talked about it in a separate article though (link below), so you can check that out if you want to know more :)

Cool.
So those were the four meanings of ausgehen that are worth remembering…

There’s actually a fifth one (yeah, I know), which is to run out  in a sense of depleting resources.
The meaning itself doesn’t need much mind yoga … I mean, to run out and to go out are not that far apart.
But we do need mind yoga to use this type of ausgehen because the grammar is… well… twisted.
Or actually, it’s twisted in English.
You see, you say “I am running out of money.” That sounds like you’re running and you’re getting away from money, when actually, the money is running away from you.
And that’s how it is phrased in German… the money is the subject and the person is an object.
This meaning isn’t really something you need in daily life, so don’t worry to much. I just want to give you the examples for completion.

And of course we also need to mention the noun der Ausgang, which can carry several of the ideas of the verb…

But the most important translation is our course exit.

And that brings us right to our last point for today… the r-version.

And like most r-versions, rausgehen takes the combination of verb and prefix literally and so THAT’S the German verb for  to go outside. Yes, the noun is der Ausgang, and the verb is rausgehen.
Because German!
Seriously, ausgehen would sound REALLY strange.

If you were to say that at a bar your friends would be super confused… like… what? We’re at a bar. So we ARE out already. If you want to ask them to come outside, you really, really need this little r there. Just a small scratch in the throat, but it makes a big difference…

Rausgehen is really really important, so here are a few more examples.

Oh and rausgehen has some abstract powers too, so here’s an example for that:

And I think that’s it for today.
This was our look at the meaning of ausgehen, which might actually be one of the most important prefix verbs around. .
As always, if you want to check how much you remember, you can take the little quiz I have prepared for you.
And if you have any questions or suggestions just leave me a comment.
I hope you liked it and see you next time.

ausgehen (to turn off/be turned off… devices switching from on to off)
ausgehen (to to out on the town … party, dinner, culture)

etwas geht jemandem aus (somebody runs out of something, often money or time – mind the reversed grammatical roles)

spoken past:
form of sein + ausgegangen

direct opposites:
angehen (to be switched on/turn on)
zu Hause bleiben (to not go out on the town :)