A fun look at the word "arm" and its various meanings in German and English. Also: what do waffles have to do with atomic weapons. 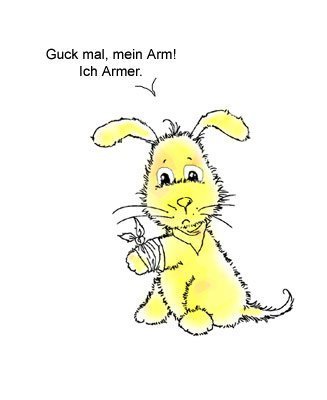 and welcome to our German Word of the Day. And today, we’ll take a detailed look at

aka the processor design that helps run about two thirds of the world’s mobile devices.
#nerd intensifies
Yeah, computer hardware puns are like super models – incredibly sexy, but few people actually get them.
#stand-up comedy intensifies
Seriously though… the word arm is actually quite interesting. Most of us primarily know arm as the thing that attaches the hand to the torso. But a fire arm is not an arm on fire. And then there’s the German arm which means…. poor.
Today, we’ll take a look at how these words connect, see some crazy, unexpected family relation and learn some really cool useful vocabulary and idioms in the process
*teaching intensifies
So let’s jump right in…

Let’s start with the body part arm. The origin of that is the unprecedentedly ancient Indo-European root *ar- which carried the idea of “fitting together”. That’s quite a broad idea actually, and the family tree that grew from that root is pretty impressive. Art, article, arthritis, armor, harmony, order… they all (and more) come from the idea of “fitting together”.
If you want, we can speculate about the logic of those in the comments, but now let’s focus on arm. The arm is called arm because it is fitted together from several parts.
Now you might be like “Wait, so is the leg. Or the spine. That’s kind of random.” and you’re right about that.
Actually, in ancient Greek the word arthros referred to all joints of the body and the Romans used it for the shoulder in particular, while they used the ancestor of branch for the arm. But in the Germanic world the word arm happened to be used for … well… the arm.
But enough with the history… let’s look at some examples.
In German it is der Arm, or die Arme in plural.

Taken literally, this means that Maria takes Thomas up on her arms, which is very well possible, because she has gotten friggin’ swole ever since she started CrossFit. But jemanden auf den Arm nehmen also expresses the idea of … well.. bullshitting someone. Not in a bad, lying way… more in a kidding way.

It’s kind of tricky to use it in the right situation so I’d say just keep this idiom on the passive pile.
What you should add to your daily life in German, however, is the verb umarmen. And I mean the word as well as the action, because umarmen, quite frankly, is awesome. Literally it means “to arm around” and you might now be able to guess it… it’s the German word for to hug, to embrace.

By the way… I just realized that embrace is pretty much literally the same as umarmen. Like… do you remember that I said the Roman languages use their version of branch for the arm? Well… “em+brace“. And if you need a connection between arm and brace/branch, just think of the word bracelet… which kind of should be called armlett.

Anyway, in German besides the verb umarmen, there’s also the noun der Ärmel (die Ärmel in plural) which is the sleeve (piece of clothing where the arm is inside). Not that useful, but there are a couple pretty common idioms with it.

Cool.
So now we’ve covered the body part arm, but what about the other arm that exists in English? The arm you use to arm yourself. The arm you need armor against. Gee, this is confusing.
But yeah, first of all let me say that, yes, this arm comes from the exact same root as the body part arm. Which kind of makes sense. I mean… our arms were probably the first weapons we used. The actual origin is the Latin word arma, and the core idea was that an arm is something that is fitted together… thing the sword and its handle or the arrow and its head.
Anyway, while German does have some Latin based words like die Armee or die Armada, the word for the actual arm is…. die Waffel. Hmmmm… waffles. So tasty and yet, so destruc.. oh wait, forget that. The German word for arm is die Waffe. Same family as weapon.

Man, these unicorns .. they’re bad enough as they are but once they start drinking …. it’s awful.
Anyway, so now we know the body part arm (der Arm) and the weapon arm (die Waffe).
The only thing missing is the German adjective arm. And that can be REALLY confusing to learners if they don’t know that it means poor.

Now, some of you are probably doing some heavy mind bending at the moment to find the connection between the family of arms that we had and the idea of poor. And you can keep searching, but if you don’t find one, don’t worry… because there actually isn’t one. The German adjective arm has NOTHING to do with der Arm.
The origin of the poor-arm is actually not known for sure, but the most likely theory is really really interesting because it says arm is connected to … drumroll please… Arbeit. Can be pretty ironic, if you put the right spin on it.
And it gets even better once you know that Arbeit is related to Erbe, which means inheritance.
Like… inheritance – poverty -work. You can tell a lot of stories with these three words depending on the sequence you put them in.

But what’s the connection, you wonder? The missing link is the English member of the family… the word orphan. An orphan “inherits” from its parents, but back in the dark ages, there rarely was any wealth to be passed on. So becoming an orphan early usually meant a lot of hardship. That’s actually the original meaning of the Germanic Arbeit. And not only in German, do we see such a negative original sense. The Slavic base for work, rabota, which is where robot comes from, once was about servitude, slavery.
So yeah… arm most likely comes from a background of orphan children having to work awfully hard.
Man.. in a normal post this would be a good time for a little joke, but this is actually pretty depressing.
So let’s just look at some examples.

I guess we should note that arm is usually NOT used as poor in the sense of low quality. The better word there is schlecht.

And last but not least, let’s look at examples for some of the related words like the noun die Armut, which means poverty, the verb verarmen which is about going into poverty, or -arm in compounds where it expresses the idea of low.

And that’s it for today. This was our look, or should I say ride, through the meanings and origins or the word arm and I am pretty sure you have forgotten half of it already :).
So if you score 50% in the quiz my really well dressed assistant has prepared for you – then you did pretty well :).
And as always, if you have any questions or suggestions or if you have some more cool idioms with Arm (there are more out there), just leave me a comment.
I hope you liked it and see you next time.