A fun look at the meaning of the prefix verb "ansprechen" and its various related words that range from being picky to eye candy. 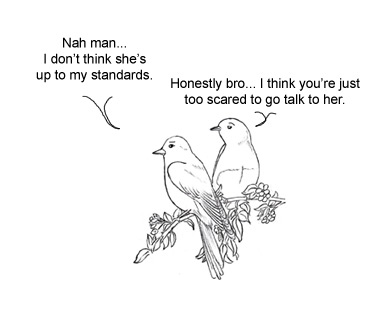 and welcome to episode number 152.167.123 of Prefix Verbs Explained. #feelingisthenewcounting
This time with talk about the meaning of

Which is not only useful if you want to bring up an issue in a meeting (#businessGerman$$), it’s also what you should do when you’re single find someone interesting and attractive (#datingadvice♥ #absolutealpha).
“Erm… Emanuel, we wanted to bring up the issue of those hashtags you started using recently? “
Oh, that. I learned that it’s what you gotta do in 2018 if you want to appeal to a young, cool audience. Pretty cutting edge, right?
“No bro, it’s pretty stupid.”
Oh… #sad #realitycheck.
“… and also, Emanuel, even though not all of us are exactly young, we’re already the coolest audience on the planet, Emanuel.”
Oh… you’re actually right!
#truth
Ha… if you’re new here, you’re probably REALLY confused now :)
But the content is usually pretty good. So let’s jump right in…

Sprechen means to speak, that’s pretty much clear. But what about an? Like most prefixes, it has two basic ideas it can add to a verb. The first one is a (broad) sense of “at/on” and the other one is “on” in a sense of being or switching on. That last one is also used in a very vague, abstract notion of starting and that’s what we’re looking at with ansprechen. Because the core idea is that of “starting to speak”. That’s not the translation of course ;). It’s just the abstract core that unites all the uses.
Now you’re like “Oh god, here we go.”
But it’s not that bad for ansprechen. Actually, to address is a pretty good match, but it doesn’t work for all contexts.
Anyway, let’s just take a look what we can do with the verb.

The first use it the sense of bringing a subject or issue into a debate. Or in one word to address. It sounds a tiny bit formal so don’t use it too much with your friends but in a meeting it is perfect.

But you can not only ansprechen topic, you can also ansprechen someone. If it’s about a particular topic, you’d connect that with auf.

But it also works without a particular topic. And one of the most common context is THE context.
And by THE context I mean dating.
Ansprechen is what you wish you had done to that hot someone you had eye contact with in the train. And it’s a pretty useful word in dail…
“Emanuel, what’s this eye contact in the train thing you mentioned? Sounds really weird.”
Oh … that, that was a thing back in the day. You see, we wouldn’t have phones so we’d just look around and every now and then you’d…
“No phones?! Oh my god, no thanks!”
Hmm… I guess my hash tags did attract a younger audience, after all.
Anyway, examples.

Now, ansprechen someone is not limited to dating. A sales person starting to talk to you in the street would also be ansprechen for example and there’s the really nice adjective ansprechbar, which is about being approachable.

And actually, it can also be used in a more general sense of appealing to someone.

And last and kind of least, ansprechen can also mean to respond. But only in a sense of systems reacting to some sort of excitement.

But by far the more useful noun is der Anspruch. It’s a bit hard to capture with one word, but the basic idea is that there is a demand, a requirement that needs to be fulfilled. It’s often used in plural contexts where someone has high standards but it’s also used in a sense of demanding and in formal German it is an actual entitlement. It doesn’t really connect to the uses of the verb that we had but if we think of requirements as something that you speak about in the beginning, then it makes at least a little sense. or maybe not, I’m not sure.
Anyway, this word is really really useful and definitely worth adding to your active vocabulary.

A “mini-job” is the official German name for jobs that pay up to 450 Euro per months. And just in case you’re working such a job: yes, you DO have a right to paid vacation. Oh and you’re entitled to sick money as well, by the way. Not much, mind you, but more than nothing. Many employers “don’t know” this, and will tell you that you don’t have the right to it, but you do.
So if you feel like I am talking about you right now… let me know in the comments, if you wanna know more. I can hook you up with some links ;).
hey and speaking of “feeling talked to”… this brings us right to the last word I want to tell you about… or actually it’s not a word, it’s the phrasingsich angesprochen fühlen which is about exactly that… you feel addressed or spoken about. And it’s pretty common in colloquial German.

Of course you’re now all like “Where can I sign up?” but I gotta seriously up my Yoga before I do that. Seriously, the only time I can touch my toes is when I watch Titanic with them…. the left one always cries. So there won’t be a hippie retreat anytime soon.
But I do have something in the works that’ll help you learn German. I’m not gonna tell you what it is yet, but if you want a sneak peek … click here

And that’s it for today :).
This was our look at ansprechen, and even though none of the meanings is a must have, you’ll definitely hear it in every day life from now on.
As always, you can recap a little with the quiz I have prepared.
And of course, if you have any questions or suggestions , just leave me a comment.
I hope you liked it and see you next time.
…
…
What… oh… the r-version? Well, there is none ;).
Bis nächste Woche.