A comedy show – for German learners 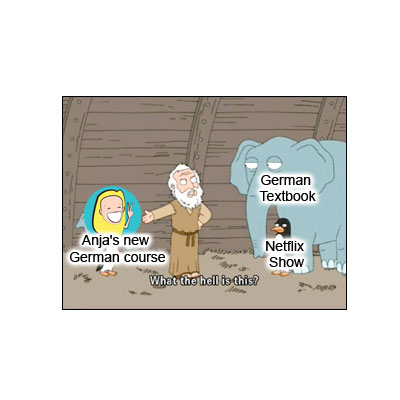 and welcome to a new episode of review of the day, this time with a look at

Many of you probably know Anja, but for those who don’t: Anja is a YouTuber who has one of the biggest German channels out there, with almost a million subscribers and she’s part of what I call “The golden generation”, together with Easy German (the absolute GOAT),  Lingoni (with Pesto and Jenny), GetGermanized and Deutsch Für Euch.

Anja has loads of cool videos on her channel but she’s also created a few online courses, which were okay. I mean… decent courses… doing their job.
But they absolutely PALE in comparison to what Anja has created over the last year. If you ever need an example for what “stepping up the game” is… it’s what Anja did!

Because she made her course into…

The great thing about videos with native speakers is that you get to see language used in context and in real life.
And if there’s an overarching story and fleshed out characters, then learning German is like watching Netflix … just with cases :).

The setup for the series is pretty standard and we know it from many textbooks or the famous learning series Nico’s Weg by Deutsche Welle:

The main character Katie (played by Anja herself) arrives in Germany, makes friends and has all kinds of small and big adventures.

Each scene is a short little dialogue filled with useful words and phrases, or chunks as Anja calls them in her learning system, so you see loads of useful vocabulary in context and “in the wild”.

And for each video, you get a script where you learn one or two bits of grammar and you get loads of exercises to practice the grammar and the vocabulary of that lesson. And for each lesson, there’s also a comment section where you can ask all questions you might have and get answers from NATIVE speakers (or Anja herself, if she has time).

So it’s similar to what some textbooks are doing, except it’s actually in video, way more interactive and way more not boring :)!
Eventually, she wants to create courses for up to B1, but for now the A1 course is finished.

Here’s what you get in detail:

The first season of the show (which is level A1)  has 20 modules in total, each coming with 3 short video scenes (about 2-3 minutes long).
That makes 60 video -lessons in total.
For each video, you’ll then get:

After the challenge, you’ll have seen how many important every day situations play out, you’ll have learned loads of useful words and chunks and you’ll know most of the basic grammar of A1 like pronouns, some cases, conjugation, negation and so on.

It was originally designed as a 10 week program, but once you’re signed up you have full lifetime access, so you can progress however fast or slow you want.

1) The humor and spirit

Those of you who know her Youtube channel are familiar with Anja’s bubbly personality and positive and engaging energy.
If you like that, you will LOVE the series!!
The story is great fun, there’s lots of quirky humor in every scene and you can see that the people are really enjoying playing the roles.
It’s really fun to watch and you’ll remember loads of phrases and words just because the scenes are so engaging.
Oh and speaking of the people playing the roles… that’s kind of an all star cast. Brad Pitt, Jennifer Lawrence, Leonardo di Januzsro, Carilett Johannsen.. they’re all there.

. Anja has invited loads of guests from the German teaching Youtube, Insta, TikTok scene so there are plenty of familiar faces. Dein Sprachcoach, Deutsch mit Maria, LerneDeutsch... even Cari and Januzs (the absolute GOATs) took a role.
Oh and I’m somewhat of an actor myself ;)

So it’s not some random actors, but people who actually have something to do with learning German, and that you might already know.
Sure, the acting is a bit goofy and giggly at times, but that’s part of the charm honestly. Ain’t no need for method acting in a series like that :).

The production quality is great! Images may not look as slick as Nico’s Weg sometimes, but that series had an much higher budget and all the resources of the Deutsche Welle. Anja had professional equipment AND professional people for camera and audio on set and it really shows.

This might sound like a weird one to point out, but the series also has a narrator that leads us along Anja’s journey and I think he does a phenomenal job. Really professional and engaging.

Yes, you get bonuses. Along with the new course, you also get access to Anja’s other (smaller) courses like the ones on cases, modal particles, articles and sentence structure. I have not checked those out, so I can’t tell you details, but yeah… lots more for you to study.

The videos are really fun to watch and you can pick up vocabulary just from doing that. The setup as a challenge and the comment sections for each lesson will also help stay engaged. But at the end of the day, it is still self study. It is YOU who needs to sit down and read the script with the grammar explanations and do the exercises. And you’ll have to do some supplementing with other sources, especially if you’re a complete beginner.
So you need to be aware that YOU are responsible for how much you benefit from the course. If you don’t put in the work, you won’t get the results :)

I didn’t get to try out the exercises thoroughly, but as far as I can tell, they’re mainly based on pdf. So I think you need to either print it, or fill it on the screen and then compare with the solutions.
Something a bit more interactive would have been a better choice here in my opinion. Not because you then “learn better”. Doing the exercises as a printed pdf is probably superior in terms of learning. But the chances that you do the exercise is much higher if it’s an actual online quizz. At least for me it’s that way. That goes back to point one, essentially – you need to have some self study skills and motivate yourself to really benefit from all the material.

The price for the course is €347.
A lot of work and funds went into the creation and I think it’s definitely a better investment than a random A1 German course, especially when you factor in all the bonus material.
But it’s still quite the price tag that shuts the door for a not so small number of people. It is what it is, but it’s still a pity :)!

Anja’s new course is an amazing project with lots of fun and love (and work) in it.
If like Anja and you want to learn the basics of German is a fun way and you have some amount of self study power, then I totally recommend this.
And they have a 30 day money back guarantee, so you can give it a try and see if it works for you.

If you’re now like “Sounds awesome, I want to sign up” then you need to take action right away because

The price is currently 297 Euro for one season. You can pick whether you want season 1 or 2 and then they’ll offer you the other one for a good discount.
Here’s the link for the direct sign up:

or if you prefer you can also pay in three installments of 112 Euro each.

And if you want to check out a bit more info and impressions about the course, you can find that on her landing page

All the links are affiliate links, so if you sign up through them, Anja will have to give me a kickback.
I mean… I didn’t get payed for my roles, and I prepared like 6 weeks in a bakery, just to nail the part :).

Cool… so that was my review of Anja’s new course. If you#re somewhat of a beginner or you want to refresh and you like Anja’s style, then it’s an absolute win.
Much more entertaining than Nico’s Boredom, that’s for sure.

Let me know in the comments, what you think about, and if you have any questions about her course. I’ll try my best to answer all of them, and if I can’t I’ll ask Anja and her team :).
To wrap it up, here’s a little outtake from our filming at the bakery, have a great week and I’ll see you next time.