A quick look at the meaning of "absetzen" and what glasses have to do with taxes, TV shows and high heels and paragraphs. 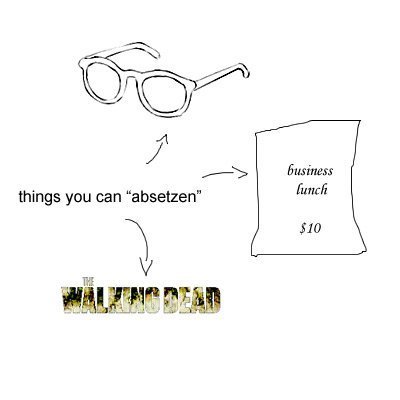 and welcome back to a new episode of the hype series

And the title of today’s episode is

Now you’re like “Wait, we got tricked. This isn’t Stranger Things!!! This is bloody Prefix Verbs Explained.”
Yeah, that’s right. The dreadful series is back! And unlike Stranger Things which will start to suck and at some point come to an end, prefix verbs explained sucked from the beginning and will never be taken off the air.
And speaking of taking off the air… with that we’re already right at the meanings of absetzen. So we might just as well continue ….

Setzen is the German brother of to set and but it’s better and more helpful to think of it as what I like to call a placement verb. There are three main placement verbs in German – stellen, setzen and legen. They all are about positioning things or beings in space. Or an abstract reality in a broader sense. #helpful
I don’t want to go into detail about that… like… ever…. but in a nutshell, stellen is about “putting something upright”, legen is about “putting something horizontally” and setzen, the least common one, is used when neither of the other two fits. #helpful_increases
Anyway, let’s just think of setzen as a really vague idea of putting, setting.
Now, the prefix ab- can lend two notions to a verb. One is separation and the other one is downward.
If we combine that with this vague notion of putting, then we get something like putting ,setting down, putting aside.
And that’s actually pretty much what absetzen is all about. That’s the core.
The problem is that… or wait, that sounds too negative… erm…. the fascinating beauty of it is that it’s used in a wide variety of contexts, so the translations vary.
So let’s go over them together real quick.


Maybe the most common meaning is to take off  in context of hats, glasses or headphones.
“And planes?”
No, not planes :).
The opposite is aufsetzen and you kind of literally put these things “on top” of your head , so absetzen for taking them off makes perfect sense.

Next up, we have absetzen in sense of putting down. Like … putting down a heavy piece of furniture to take a breath while carrying it up the stairs.
And in a more figurative sense, this absetzen is also a common colloquial word for to drop someone off.

Absetzen is also THE word for cancelling TV shows and stopping with a medication – which both kind of also have a notion of dropping in them.

Another context, where absetzen comes quite in handy are taxes, because it is the German word for to deduct (you take something off of your income, so to speak). And while we’re talking about business, absetzen is also a technical sounding word for to sell usually used for bigger numbers (just think of a drone, dropping of a package on your door).

And then, last but not least, we have absetzen with a self reference – sich absetzen.
This can be used in a rather literal sense of little particles settling down on a surface.

But the more common use is the idea of setting oneself apart from.

pointless, short paragraphs in bold pink that hurt the eyes
and serve no purpose.

#unique #onlyhere
And speaking of paragraphs, that brings us right over to the noun der Absatz, because this is the German word for the paragraph of a text (not for law, the word for that is der Paragraph).
Now you might be like “Wait… this meaning has nothing to do with anything we have talked about so far.”
And that’s true.
Der Absatz as paragraph is actually based on yet another use of the verb. We’ve had absetzen in sense of putting down something. But you can also absetzen a pen and THAT is about taking of the surface.

And in the second example, where Thomas explains to Maria why he doesn’t want to wear high heels, we actually see the second noteworthy meaning of der Absatz, which is heel, the part where we “set down” the foot.
Oh and just to explain … Thomas Mann is one of the most famous German authors besides Mozart and Piccasso and his sentences are really really long.
Like… when you read Der Zauberberg, you wonder why he had to make them so long. Maybe the man was trying to compensate for something else being not so long? I mean… the man was called Mann. I can imagine that this creates a bit of pressure.
But I digress.
Let’s get back to our topic and there’s one more thing we need to talk about. Long term readers will know what I mean… the r-version :).

For some reason, verbs with ab- as a prefix don’t really have this pure r-version. So there is no rabsetzen. But there is herabsetzen. The best translation is probably to diminish and it can be used in context of prices as well as in a figurative sense of diminishing people.

But overall the verb is not that common and you can definitely put it on the passive-vocab pile.

And that’s it for today. Hooray :)!
This was our look at the meanings of absetzen and I hope you could see how they all revolve around a core notion of putting/setting down/of.
As always,  if you need a quick recap you can take the little quiz I have prepared. And if you have any questions or suggestions, just leave me a comment.
I hope you liked it and see you next time.