The verb "absehen" is not very common. But the noun "die Absicht". Today, we'll find out what it means and how to say "on purpose" in German. 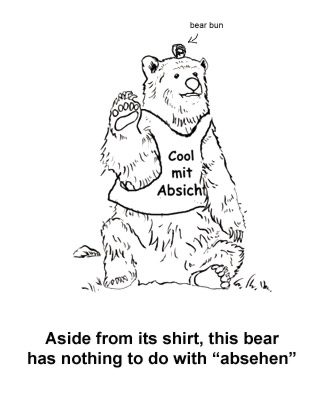 and welcome to another episode of the absolute bestest series on German verbs and before you go like “Emanuel, ‘bestest’ is not proper English” let me tell you that I did that on purpose. Because on purpose has a whole lot to do with the verb we’ll look at today

Absehen has two meanings that are both super useful. And they’re both based on the same notion of ab – the idea of separation.
The other notion ab can have is downward and we’ll see that, too, but more on that later.

So, we have to see combined with the idea of separation. With a little bit of mind bending that does make sense as to not look at something. That’s kind of the first meaning of absehen. It’s not used in a literal sense though. Absehen or absehen von to be precise, is about not taking something into consideration anymore, not regarding something as an option anymore, and it sounds super uber formal and official.

The last example is a bit of a parody. Nobody talks like that in daily life and the verb is really only for official writing and thus pretty useless for learners.
But wait Emanuel, didn’t you say that the the two meanings are super useful?
Yeah, the verb as a verb is useless. But it’s a different story for the ge-form abgesehen. Because that is a super common tool to exclude an item from the whole picture. Wow, “exclude an item from a whole picture“… that sounds waaaaaaaayyyy more complicated than it is. Examples to the rescue.

There are other words and phrases to express similar ideas, namely ausserand bis auf. Those work best as except, in contexts like this one:

Abgesehen vonand davon abgesehen used more somewhat longer things and they often have this element of not considering, disregarding.
Cool.

Now, this was already quite useful but nowhere near as useful as what’s coming up next- the other absehen which at its core this is aboutforeseeing the future.

Now you’re all like “Dude, what the hell does that have to do with the separation idea of ab?”
Well, get ready for some mind bending.
When you look in the far distance, everything kind of blurs, right? Like… when there’s a forest somewhere on the horizon it’ll just be a green belt and you can’t make out single trees and when there’s a flock of super models at a mile’s distance, it’s hard to make out which one of…. wait, I think this just made NO sense.
Anyway, what I’m going for is that, in a way, the idea of distinguishing details is about separation. You visually separate one item from the other. And that’s kind of what foreseeing is. You look ahead, into the future and you can clearly distinguish things to come.
Now, absehen is about seeing something in the future, but it’s actually not a good translation for to foresee. To foresee just sounds way too epic and cool. Absehen is for boring, dry, bureaucratic looking into the future. Like… you wouldn’t use to foresee in contexts of, say, not making a project deadline. That would be odd in the meeting…

“So, how’s the project coming along?”
” I foresee that we shall forgo the deadline in favor of a new, much later deadline. It is known.”
“Are you high?”

Boring things like this are what this absehen is used for… if it is used at all. Because common, it is not.

What makes this meaning of absehen super useful is the noun die Absicht.
Going by what we’ve learned about the verb, Absicht should be “something you can see in the future“. The real meaning has the element of planning added, so it’s not just about seeing, it’s about envisioning. Die Absichtmeans intention, plan.

There’s also the verb beabsichtigen, which means something like to plan, to intend.

But what makes Absichta MUST HAVE WORD is the fact that it’s the German word to express the idea of on purpose. The main phrasing is mit Absicht, but Absichtalone also works and there’s also the adjective absichtlich.
Note, that all of these often sound a tad bit negative. They’re not a neutral “on purpose” but more a reproachful “on purpose”.

And while we’re at it… the number one word for the opposite idea, the idea of accidentally, is Versehen, the “wrong-seeing”.
So here are some examples for that, too.

So… mit Absicht and aus Versehen these two are really, really useful and you definitely need them in your active vocabulary.
Cool.
Now, this would be a great moment to wrap this up, but no look at a prefix verb is complete without a look at the r-version.
It’s really quick this time, I promise.

Ab doesn’t have an r-version. I don’t know why, but rab-something just doesn’t exist. It’ll always be the full her-version so we have herabsehen. And this is where we see the other notion of ab in action, the notion of downward. Because herabsehen means to look down on something. Seems like this could be a quite useful word, but in reality it’s rather rare and sounds quite fancy. I guess it works in the figurative sense of arrogance.

but for actual factual looking down, people would use runter combined with either gucken or schauen.

So, German has sehen which is mainly to seebut can also be to watch, and German has gucken and schauen. Which of the two that’s used depends mainly on the region and they both mean more to look, to watch rather than to see. In combination with prefixes, they sometimes do overlap with the sehen version and sometimes absolutely not at all.
In case of ab, it’s the latter. Abguckenand abschauen do not mean anything of the stuff we talked about above.
Do they mean anything?
Yes, abgucken and abschauenare about the idea of gaining knowledge or skill by copying what they’re doing. You “watch something off of someone” . They’re usually used for small things, like how to make a really good pie or how to close your laces with one hand… or for answers in a test.

Note that they’re not used in sense of peeking on your own cheat sheet. It’s really only for looking at someone else’s stuff.

Cool. And that’s really it.
This was our look at the prefix verb absehen and the two main takeaways are the phrasing abgesehen von, davon abgesehen which mean something like that aside, apart from and the noun die Absicht, which is used for the German translation of on purpose.
As always, if you have any questions or suggestions or if you want to try out some examples, just leave me a comment.
I hope you liked it and see you next time.

von [etwas] absehen – refrain from something (usually legal action)
abgesehen von X – apart from X, X aside, except X
davon abgesehen – apart from that, that aside