"abhängen" is one German translation for "to depend". Today, we'll learn why it means that and how it connects to relaxing and taking down laundry. 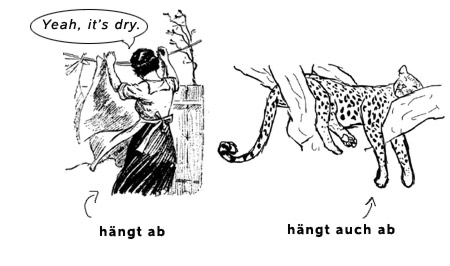 and welcome to a new episode Prefix Verbs Explained. Imagine a verb you can use in the following 4 contexts: talking about dependencies, car chases, doing laundry and chillin’ with the crew. Is that too crazy? Well, that depends on the language. For German, verbs like that are bread and butter business :). Ladies and Gentlemen get ready for a look

Ab has two notions that it can add to a verb, separation-ness (we could also call it off-ness) and downward-ness. They can create distinct meanings but in combination with hängen (to hang) they kind of blend together. To hang has both ideas in it anyway. I mean, hanging from the ceiling means not being directly at the ceiling, so there’s the separation and of course you can only hang downward. Well, okay unless you’re in space. There, you can hang allward. Or was it anyward? Oh boy… I think the bs-express just arrived. I really thought I’d lost him.

So anyway, abhängen looks a lot like to hang off. And if you have some experience with German prefix verbs you’ll know that it’s NOT gonna be the translation. The meanings of prefix verbs just aren’t that literal, usually. But abhängen actually is the literal translation of an English word: to depend.
The base of depend is the Latin verb pendere, which is also the base of words like suspend, appendix or pendulum. And now guess what the verb meant… drumroll… it meant to hang. So depend is really the exact same as abhängen… pend (to hang) combined with de (idea of separation).
And the use of the verbs is really pretty similar. Only that you depend ON while you abhängen VON.

Abhängen is just as useful and common as depend and the same goes for the related words.

Cool.
Depend is definitely the most common and most important use of abhängen. But as I mentioned in the beginning, there are 4 meanings in total, so three more to go. Here they are: to lose in sense of losing a pursuer, to take downlaundry and to hang around/chill(with friends).
A really random collection of contexts and yet they all make sense. I mean, you hang up your laundry so you can also “hang it off”. And as for losing a pursuer… just think of a trailer. It hangs on your car and follows you everywhere. And when you “abhängen” it, it’ll not be after you anymore.
So, not super logical but I hope you can see the connections.
Examples.

All of them are common in their respective domain but abhängen in sense of hanging out definitely sounds a bit like juvenile slang. So if you tell your kids that you’ll go abhängen with the peeps from the grind.. that won’t come across as authentic as you think.

All right. Now before we get to see the verb that actually does mean “to hang off/down” (yes, the r-version), there’s one little tiny bit of grammar we need to talk about. Abhängen actually has not one but two ge-forms – abgehängt and abgehangen. That is because hängen itself has two ge-forms. Gehängt is used whenever there’s a direct object, so when you hang something. Gehangen is used if you just hang.

You can use gehangen for gehängt and it’ll sound okay-ish but you cannot use gehängtwhere you’d need gehangen… that would sound quite wrong.
And it’s the same for abhängen. For laundry and a pursuer you’d use abgehängt because there you have a direct object. For to depend and to hang out you’d use abgehangen.
Oh and that reminds me of something else. Abhängen in sense of to depend is actually one of those verbs that people tend to use the real past with instead of the spoken past. So instead of saying

The first one is not wrong but the second version is much more idiomatic. Now you’re like “Please Emanuel… are there more verbs like this where we need the real past even in spoken? If so, can you give us a list? Pleeeeaaase.”
But I’m just like “Let’s now get to the r-version of abhängen.”
Awwww… look at all those frowns :)

If you’ve read a few posts here you might be wondering if there’s rabhängen. But for some reason verbs with ab- always have only a her-version. The effect is the same though. The meaning of herabhängen is the most literal interpretation of the combination of hängen and ab… hanging off or hanging down.

It does sounds a little tiny bit formal though. Or let’s say literary. In daily life, people are more likely to use runterhängen in most contexts.

And that’s it for today. This was our look at the meanings of abhängen and if you can only remember one thing… remember that it means to depend.
As always, if you have any questions or suggestions just leave me a comment.
I hope you liked it and see you next time.

Oh and yes… we’ll do that stuff about the past. For the meantime, you can find an incomplete list I compiled here

written past stem
hing ab (common in sense of to depend)

related words:
abhängig (dependant, addicted)
drogenabhängig – addicted to drugs
unabhängig (independent)
wetterunabhängig – independent of what the weather is
der Abhang – the slope, drop off
abgehangen (hung/well-hung … for meat only)