You're in charge of the condition of your vocabulary. Go get what's rightfully yours - mean this article about the meaning of "zustehen" :). 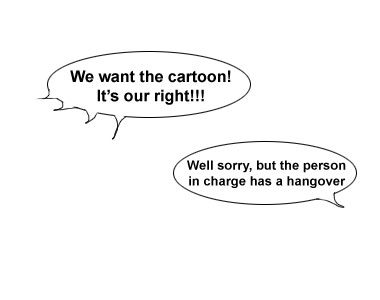 so guess whaaaaat: someone is having his birthday today (November 6th)! Your’s truly. The most bestest, beer drinkingest German ‘splainer on the web… uh, I mean radio. This is a radio show, don’t let all the reading deceive yo… oh god, this intro sucks.
Almost as much as prefix verbs – German’s acne. You think you got ’em all but then over night ‘popopopopop‘ and there they are. A whole bunch of new ones. So annoying.
The we’ll pop open

By itself is pretty clear, but when you look at it back to back with its spin offs zuständig and der Zustand, it’s definitely rife for a quick squeeze.
So let’s wash our hands and get to work.

Zu can add two ideas to a verb: the idea of closed and the idea of toward. In case of zustehen we’re looking at the latter. Taken literally, it means “to stand to(ward)”. And that’s rather close to the actual meaning: the idea that something is rightfully yours/ should be yours by right.

Note that it’s NOT just the synonym for to belong. The focus really is on the fact the “rightful” part. Now, some of you might be like “Hey wait, isn’t that basically like being entitled?” And technically it is. Except for one thing… tone. Zustehen just doesn’t sound entitled ;).

I bet some people would have quite the gut reaction when they hear this sentence… like “Ugh. Millennials!!”.
But okay, millennials really do suck.
Wait… oh my god, they’re flocking toward Twitter. Hey, hey come back I was being ironic. Come on guys, cut me some birthday slack. I’m entitled to it. Sounds pretty weird, right? Well, with zustehen it would sound perfectly fine and everyone would be feel sympathetic.
Anyway, let’s look at a few more examples to get a feel for the verb.

And that’s it. This is the ONLY meaning of the verb zustehen.
Now let’s turn to the adjective zuständig. Based on what we’ve learned about the verb, it could mean something like belonging to. That would be consistent. But we all know what German has to say about consistent:
“Not my job.”
Or in proper bureaucratic German:

Zuständig means something like responsible, in charge. So it actually IS about “standing toward” but this time it is us “standing toward” a thing.
What’s important to note is that zuständig is focused on assigned responsibilities and duties, not about guilt or who’s to blame. Like… let’s say you go to the toilet and when you get back there’s a pile of horse poo on your desk. If you want to know who did it you’d ask this:

that sounds like you’re asking who’s in charge of dealing with poo on desks. So yeah, maybe think of zuständig as a mix of responsible and charged with.
But let’s just look at some examples.

Hey Elon, Elon… where’s my paycheck? For the ad? Why isn’t it here yet??
“It’s coming, man. You will get what’s rightfully yours. At hyperspeed.”
Sweet, thanks.
The sky was covered with gray clouds, the metal jetty with leaves; yellow, red, green. But most of them a dirty brown. A strong wind blew fine rain drizzle over the land. The duck sitting on riverside fluffed up a bit more. “Ahhhh November. Time for red wine.” it said to itself and turned back to the article. “What a weird transition.” the duck thought as the article turned toward the noun der Zustand.
When you look it up in a dictionary, you’ll find the state, the condition or shape. But these two can mean all kinds of things, and it’s better to remember and grasp the core idea of der Zustand, which is basically the “how something is at a certain time”. So it is NOT condition in the sense of “If A then B” for example.
Does it tie in with the other idea we’ve had? Well, I can’t really see any connection at least. And I’m usually a good connection see-er.
Still, it does make sense on its own right. The state, der Zustand of something is “how it stands”… more or less :).
Anyway, der Zustand is a pretty common noun and you can find it in a variety of contexts.

And of course there are also lots of compounds with it.

And which state of matter is it?!?! It’s a gas.
What’s that you say? Boiling point of water is 100 degrees Celsius?! Well, that was BEFORE global warming!!! Now 98 is warmer. Check you facts, duuuuh.
Oh speaking of duh… I think, we’re duh-ne here.
Ugh… these jokes. The cringe.
But yea… normally, we’d have to look at the r-version still, but verbs with zu as a prefix don’t have and r-version. So yeah, that’s it.
This was our look at zustehen, zuständigand der Zustand.
As always, if you have any questions or suggestions, just leave me a comment.
I hope you liked it and see you next time.