"Ziel" is the German word for "goal". We'll learn where it comes from and what nice related words we can add to our vocabulary. 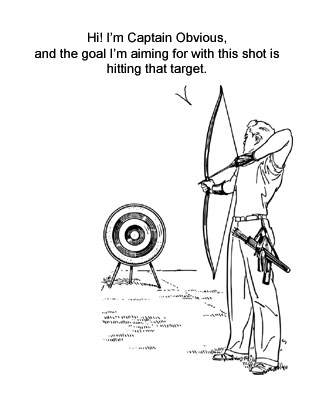 And this is one of the few examples, where English actually has more words for something than German. Das Ziel is aim, target and goal. And it’s related to neither of them. The origin of goal is a bit in the dark, aim is actually a (very slurred) cousin of estimate, and target is based on an old French word for shield. Hmmm… I wonder if that’s why they didn’t do so well against the French in the 11th century. Like… shouldn’t you try to shoot for NOT the shield?

But anyway, so Ziel is not related to any of its translations. But it does have a couple of relatives in English.

Das Ziel comes from an old Germanic verb that was about the idea of striving, working toward a goal. In English, this verb eventually turned into the verb to till. Seems odd at first but think about it – farming (tilling) your land,  plowing and sowing and weeding, is hard work and there’s a clear, very, very important goal – have enough food to last till spring comes.
Now you might be wondering “Wait a second what about till as in till spring comes… is that related, too?”
And indeed it is. Till/until are also related to das Ziel and I don’t think the connection is too abstract, because they basically define an end-point, a destination in time.

But enough with history, let’s look at some examples. And by the way… destination and objective are translations for das Ziel, as well.

Of course there are also lots of compounds.

Those were just a few examples of course. If you’re in the business or manager world, you might want to also learn stuff like Minimalziel (minimum goal), zielorientiert (goal-oriented) and zielführend (expedient).

Your boss will have a CEO-gasm when you drop that at the right moment during a meeting. There, I just got you a raise :).

All right.
So this was the noun das Ziel. Now let’s take a look at the verb zielen. And this one is actually not all that useful. We learned earlier that it used to be about thriving, working toward a goal. But it has lost pretty much all of that and is now just about taking aim, targeting.

And only in the very literal sense.
For more abstract targeting or aiming you’d usually use richten an or something.

The only instance where zielen is used in an abstract sense is the ge-form gezielt which can express the idea of specifically.

Wait the cat is not what I li… oh… uh… awkward… I uh…
Let’s have a quick look at the one prefix version that matters here. Erzielen is essentially about the result of aiming – getting whatever you were aiming for. The actual translation depends on context but in practice, erzielen is pretty formal sounding and limited to politics and business.

It would sound REALLY out of place for reaching C1-level, even though that’s totally a good Ziel to work towards. Or should I say, walk towards?!?! Because don’t forget the wise words of Confucius, that apply especially to learning a language

On second thought… screw that. Fluency is das Ziel. Dream big! You can do it. You just got one step closer because you learned Ziel. And to make sure you don’t forget it, here’s a little rhyme.

Ziel – you’ll get there with zeal.

All right, so that’s it for today. As always, if you have any questions or suggestions or if you want to try out and tell us what your language goal is, let me know in the comments. I hope you liked it, and see you next time.