Word of the Day – “die Klammer”

Today, we’ll climb to the top of Mount Klammer together. The higher we get, the more useful related words we can see :). Also: surprise relations to English #jawdrop 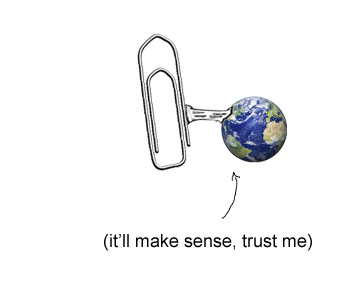 it’s yo’ boy Emanuel, back at it with another GWD.
Hollaaaa!
This time, we’ll check out the meaning of

And the best way to describe the essence of Klammer is this:
holding something (by putting pressure on it) from two (opposite) sides
But what’s describing something when you can depict it. Behold:

This is awesome because not only is it literally is a pair of Klammern but it also works as an icon for the entire Klammer-crew… and man, they roll deep.
So, let’s hustle some German…
(hmmm… I’m not sure if me talking like this really will attract younger listeners, but we’ll see…)

Holding something by putting pressure on it from two sides – such is the purpose of Klammer.
Maybe the most famous example is a Büroklammer, a paper clip. But there are some other very common ones like a Heftklammer, which is a staple (or stapler pin), die Wäscheklammer which is a clothespin/peg or a Klammeraffe, which is basically Thomas. Oh… wait… that’s just what Maria says. I meant stapler gun. Yeah, Klammeraffe is a word for stapler gun. But der Tacker is more common nowadays.
Klammeris the German word for brackets of all kinds.

And while a comma or a question mark are signs that you usually wouldn’t explicitly mention when reading something out loud, parenthesis are… I mean, how else would the listener know that something is in brackets, right.

If you want to put something in brackets, you’d usually say in Klammern setzen.

Einklammern is also an option but I doesn’t get much love in daily speech.
The opposite however, ausklammern, is pretty common. It is about the exclusion that you can achieve by putting something in brackets.

Now, ausklammern is based on the bracket-Klammer, but there’s also a verb klammern without a prefix. Well, it’s sich klammern, to be precise. And this brings us back to the holding idea of Klammerbecause it basically means to cling,

Sweet.
So this our word die Klammer and klammern, and they are kinda useful or something, I guess.
But what really makes them worth a word of the day are the related words.
Like… when it comes to related words, Klammergot game.
Get ready for quite the ride.

You might have already suspected that clam and clamp are related. But that’s really just the tip of the iceberg…. like… an iceberg before global warming.
The closest relative in German is the verb klemmen. The first use of klemmenis kind of “to put something between a Klammer”.

That’s But maybe more common is the sense of mechanical things being stuck.

Of course, there are also a couple of prefix versions we need to mention. Sich etwas einklemmen is basically THE word for parts of your body getting caught somewhere, and verklemmt (klammer auf – you’ll rarely see the infinitive – klammer zu) can mean stuckbut also uptight in the context of sex.

Cool.
Now, we’ve Klammer with an a, klemmen with an e and since all good things are three it’s no surprise that there’s also a version with i.
And if you’re into fitness, you might have heard of it… der Klimmzug.

Erm… I mean pull up. A Klimmzug is a pull up. We could think of it as a “cling pull“. You pull while clinging with your hands.
But klimm actually brings us to a whole new branch.

You see, the verb klimmen itself doesn’t exist anymore, but erklimmen does, and erklimmen is basically an epic sounding version of to climb.

So a Klimmzug is literally a “climb-pull”.
And it might already dawn on you – to climb is related to Klammer. Just like cling and clench and clinch and clutch. We could say the common theme is firm grasp.
And there’s more. We’ve learned that erklimmen is an epic version of to climb. Do you know what the normal pick is? It’s klettern. And it totally is related as well :).

And this is already quite cool, I think, but there’s more.
From klettern it’s only a couple of letters to the next word die Klette. A Klette – I think the English word is burr – is the “fruit” of a certain plant. It’s one of those little greenish balls that stick to your clothes and hair. And it’s also a nice (or not so nice) word for people who just won’t leave you alone.

Now, the principle of a Kletteis that it has lots of tiny little hooks that link with hair or fiber. It’s that principle that inspired a means of closing for shoes and garment – namely the hook and loop fastener, also known as Velcro. Why are we bringing that up? Because the German word for it is … drumroll please… der Klettverschluss. 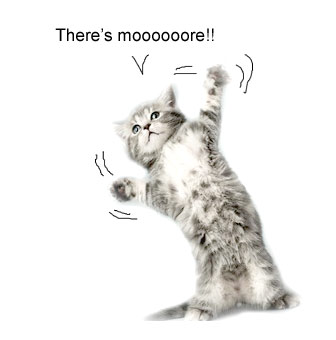 You see, what burrs and these Klettverschluß-things do is sticking, right? Well, that brings us to the next member of the family, the German verb kleben.

And you might already know what’s coming… glueis also related to Klammer and again we have this common theme of sticking.
Also hipster’s worst nightmare is part of the family: gluten, the sticky protein.
And you know what – there’s still more.
For instance der Kloß, the German word for dumpling. Or clay. Or globe. Yes, these three are members of the family, as well and there are many many more.

So now the big question is what is at the core of this crazy family?
Well, it is the uber-ancient Indo-European root *gel- and its basic idea of (forming) a lump, clenching together.
Clay is actually a good way to think about it… a sticky lump. Some of the words we’ve seen are focused on the lump-aspect (globe, Kloß), others went all in for the stickiness (glue, kleben), again others shifted from there to holding (die Klammer, clamp) and some added the notion of upward (climb, clamber).
It’s pretty crazy, right?

But in a weird way, all this makes perfect sense.
Now, do remember how I said in the beginning that “( )” can work as an icon for the whole family?
Well, I made a little (not so serious) chart with it.
Maybe it helps you remember some of the vocabulary we talked about today, because that’s ultimately why we’re doing this stuff… to learn vocabulary :)
(click on the image to get the full size picture) 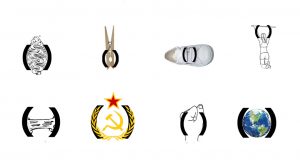 Now you might be like… “Oh. My. God… the Soviet flag, a fist, the earth. Emanuel, are you a freaking communist?!?!? ”
But you can relax guys. The fist is about clenching, the ideas of forming a lump and holding combined. And the Soviet flag… well, that’s there because of the crops. You know…for gluten. Which rhymes with … PUTIN.
Dun, dunn, dunnnnn.
#Emanuel is a communist confirmed.
Hmm… level of nonsense is rising rapidly, time to wrap this up :).
This was our German Word of the Day die Klammer, which was actually more of a look at one crazy word family. And there are actually plenty more words that we haven’t mentioned yet, in German as well as in English. So if you have a suspicion, let’s talk about it in the communism…. I mean comments. A cl/kl-beginning and some notion of sticking or lump is a pretty good hint :).
And of course if you have any questions about the article, you can leave a comment as well.
I know it was quite wild the ride but I hope you enjoyed it and learned a little. Have a great week and I’ll catch ya’ll on flip side.

ausklammern – exclude, leave aside
in Klammern setzen – put in brackets

sich klammern an – cling to
klammern – to be clingy (context of relationship)
die Umklammerung – the grasp, the clinch, the “being held from all around”

klemmen – stick
die Klemme – the clamp
sich etwas einklemmen – get caught (for body parts in doors and the like)
verklemmt – stuck, also: repressed, uptight in context of sex

die Klette – the burr, the clinger (for people)
der Klettverschluß – the hook and loop fastener, the velcro