Word of the Day – “wischen”

A fun look at the German verb "wischen" and its sometimes not so obvious prefix versions. Also, we'll learn the proper word for wiping one's butt and listen to classical music. 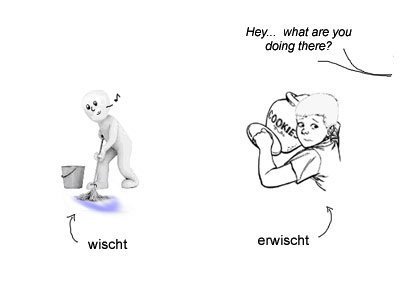 and welcome to our German Word of the Day. And this time, we’ll take a look at a word that connects windshields, busting and our butts.
You might have guessed it… I am talking about

Wischen is the German word for to swipe, to wipe and it sure looks an awful lot like waschen. That would make sense, since they’re both about cleaning. But they’re not related.
Waschen comes from the same root as water. Wischen on the other hand is the German brother of to whisk, and the original idea was  moving swiftly. Which also makes sense, at least if you’re as swift a cleaner as I am. Like a fairy, I whisk through the bathroom, whoosh, the floor. Whoosh, the mirror. Whoooooooosh the toilet. And I am done.
Yeah, I know what you’re thinking… you’re thinking that I’m not doing a lazy job cleaning.
I’m actually pretty thorough, though. I oddly enjoy das Bad wischen.
But hey, we’re not here to talk about my cleaning preferences. We’re here to talk about wischen. And while the verb itself is useful, it’s the prefix versions that really make it a word of the day.
Because there are quite a few cool colloquial ones, and some of them are impossible to guess.

But let’s start with a few examples for wischen itself. It can be used in the sense of wet cleaning, but the core idea is wiping/swiping.

As you can see, wischen is not ALWAYS used in the context of cleaning. But it is definitely the main focus, also for many of the prefix versions. Those basically specify what kind of wiping we’re doing, and it’s often more idiomatic to use one of those because German likes to be painfully specific :). So if we’re wiping the inside of something, we’d use auswischen, if we wipe up something, we’d say aufwischen and so on.

That’s why he called it the “Boléro”, by the way. Po leer o. Get it? Get it?
Yup… that was one of the worst puns ever. But hey, the guy really didn’t like the composition that much. And I kind of agree. He has written much more beautiful pieces, where the lines between classical music and jazz start to blur. Actually, I’ll link one up at the end of the article.
But first, let’s get talk about the less obvious versions of wischen.
And blurring lines is actually one of the ideas of the first one… verwischen.

Taken literally, verwischen is about removing through wiping. However, the verb for actually wiping away is wegwischen. Verwischen is more about making disappear by making it less discernible (or indiscernible). And from that it’s not really far  to the meaning to blur.

But here we still have somewhat of a notion of wiping in it. That’s different for the next verb, entwischen.
Entwischen is a slightly colloquial, “cute” verb for escaping, fleeing and there seems to be hardly any connection to wiping. But if you’re now like “Ugh, that sounds like some crazy mind yoga.” then I have good news for you. We don’t need it.
Do you remember the word wischen was related to? Exactly… to whisk. With the idea of moving swiftly. Once we have that in mind, entwischen makes perfect sense… it’s pretty much to whisk away.

And this connection to whisking also helps us with erwischen. Which means to catch, in the sense of catching someone or something that was trying to get away.

Technically, last phrasing also works for getting caught by the flu. It’s the context that makes it clear.
Anyway, so erwischen is a colloquial version for to catch and if you’re wondering about the connection to to whisk… just think of making a fast arm motion to catch an insect or something combined with the notion of “getting” that er- carries. You get something by whisking your arm.
Not super obvious, but not super crazy either.

But there’s one version of wischen, that REALLY doesn’t seem to make sense… auswischen. Or actually eins auswischen.
We already learned that auswischen means to wipe the insides of something. So literally, eins auswischen would mean “to wipe one out” . The actual meaning of the phrasing is to take a jab at someone, in a metaphorical way. Kind of like a small revenge, only that it’s actually the initial deed without anything to take revenge for…. like… prevenge, maybe. Dictionaries said “to score off/to put one over” but I have never heard of those. I hope you got the idea, though.

She basically wants to score a point against Thomas. Maybe as a payback, maybe because she just wants to tease. But yeah… jemandem eins auswischen is the phrase for that kind of stuff, and I think we should just think of that as a fixed idiom.

Cool, now I guess we can also mention the noun der Wisch, which is a colloquial, disrespectful term for a document.

And then, last but not least, there’s the one that I REALLY couldn’t make sense of: dazwischen. Like… dictionaries say it means in between there.  And I really can’t see any connection to wiping or whisking, whatsoever. And the prefix daz- … I honestly have NO idea. I’ve never seen that before…hmmm…  daz-wischen. I feel like I’m missing something really obvious here, but I can’t put my finger on it.

This was our look at wischen and it’s prefix versions.
As usual, you can (should (must)) take the little quiz, my assistant who is pissed at me because I didn’t go to the government office with her even though it’s really stressful for her… uhm… I lost the sentence. So try out her quiz. And sorry, honey!
And of course, if you have any questions or suggestions, just leave me a comment.
I hope you liked it and see you next time.

Oh and as promised, here’s a link to one of the amazing pieces of the Boléro guy.