The meaning of “winken”

"winken" is "to wink", right? Nope, they're false friends. Today, we'll learn what "winken" really means and what other cool words there are in the family. 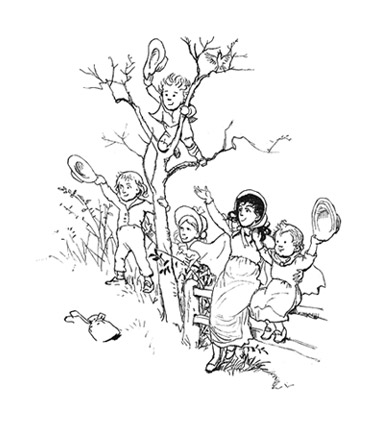 Winken looks a lot like to wink. But that’s deceiving as this old Goethe** poem tells us.

What the poem is trying to tell us is this: red and pink are somewhat similar colors. Yet, a red shirt and a pink shirt are TOTALLY different things… fashion-wise. Trust me. I’m an expert.
And it’s the same with winken and to wink. They have similar ideas and yet they are completely different things translation-wise. So, today we’ll find out what winken is why it is so similar to to wink. And that’s not all. Winken comes of course complete with a bunch of prefix versions and as if that isn’t enough already there are some cool, useful related words in family. Curious yet? Moderately? Well, that’s curious enough. In we dive :)
Winken and to wink are NEVER translations for each other. But on a more abstract level they’re the about the same thing:  signalling someone.  But while winking is done with the eye, winken is done with the hand. Or a tissue. Or a fence post. The last one is more of an idiom though. Anyway, some of you might have guessed it… winken means to wave.

Winken is a bit more narrow than to wave in so far as that it doesn’t work for thing just waving by themselves. A flag waving in the wind for example. That would be flattern (very agitated) or wehen (slow movements) or something. Winken really has this focus on signalling and it’s done by people. Celebrities, police, lovers, friends, and goals. Wait, goals?
Yeah, that’s the one more abstract use. Goals and prices can also “wave” at you.

Phrasings like these are SUPER common in brochures and flyers probably because the image is kind of cute. Just think of the stew on top of the hill waving at you like “Hey, I’m up heeeere. Come and eat me!”.
Cool, so winken is about waving at someone in order to signal something. And that idea is present in all the related words.
The prefix versions are all pretty straight forward. Zuwinken is basically just a more direct sounding version of winken.

And last but not least, there is abwinken. Literally, it means to wave off, so it’s kind of about signalling someone to stop. In practice it’s used in a general sense of expressing disinterest or saying no, be it by actually waving or by saying “no thanks”. And there’s the very common expression bis zum Abwinken, which is a positive sounding way to say that there is more than enough of something.

The noun for winken is der Wink which is something between a signal and a hint. And here we meet the fence post again :)

Both these idioms are very common and the Wink in  Wink des Schicksals we actually has some overlap with the English to wink. Like.. fate makes the train leave and then turns to Maria like  “Come on, you REALLY should walk. Who knows. There might be a surprise for you ;)”.
And that brings us to the origin of winken and the question we can ask about all false friends: Why? How the heck did it happen?
Who messed with the meaning?
It all started with the ungodly ancient Indo-European root weng and weng was about bending. The Germanic languages kept the root but they shifted the meaning toward  put at an angle/to tilt. And that’s pretty much what you do when you wave your hand. You repeatedly put it at angles. That’s how the idea of signalling came in and while German stayed with the hands, English eventually shifted to eye signals because… reasons. And bam, a new pair of false friends was born. Thanks a lot English. Well, okay, there are worse pairs, I guess.
Anyway, now before we wrap up, let’s look at two other useful German that comes from the same family. And those two are really all about the core idea of “at an angle”. The first one is der Winkel which  is the German word for angle, the second one is the verb wanken, and wanken is what you’ll do after you put a few pints “at an angle”…. waving from left to right :).

Wanken is also part of the word wankelmütig which is an adjective for people who often switch their choices. And if you’re a car nerd you might have heard of the Wankel engine… but I don’t really know what that is. The word Winkel is also often used in context of (remote) corners, and there’s even the word anwinkeln which means to put at an angle or, in context of body parts, to bend.

And I think that’s it for today. Hooray. This was our German Word of the Day winken. It’s NOT to wink, instead it means to wave in sense of waving at someone and it’s based on the idea of putting your hand at an angle.
As alw… what? .. oh you’re right, I keep saying that winken doesn’t mean to wink. The German word for to wink is zuzwinkern

As always, check out the vocab for a few more words and of course if you have any questions or suggestions you can leave me a comment. I hope you liked it, see you next time and …winke winke.
(This is a very childish way to say good bye… don’t use it with colleagues, bosses or tinder dates :)

das Winkelement – official term of the former Eastern German Republic for little flag that people had to want to wave with at parades. No wonder the state didn’t last… inventing words like this :)  (here’s a picture)
die Winkekatze – Maneki-neko, waving cat, welcome cat… German has only one word for it