A fun look at "weich", why it means soft and what it has to do with dodging a snowball, soaking beans and changing paths. 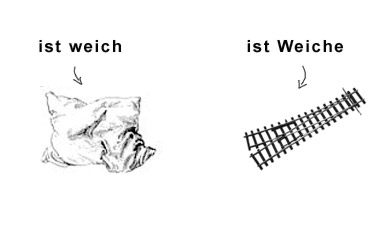 and welcome to our German Word of the Day. Today’s word can be used to describe a comfy cushion, a perfect breakfast egg and a man who cries at the end of Armageddon. Sounds random? Not at all. Ladies and gentlemen, today we’ll look at the meaning of

You’ve probably guessed it. Weichmeans soft. And just like soft it can be used in a wide variety of contexts.

Damn. That last one was awful. But anyway, there’s one thing that weich isn’t used for that much and that is… activities. Weich does really work as a description of how something is being done. So it’s not a good translation for softly.That would be sanft or sacht.

Now, weich itself is certainly a useful word to know but the real reason we’re talking about it are the many related words you can find in daily speech. So let’s look at those
First, there’s a bunch of compound. Weichtier for example is the official German term for a mollusk. Animals like snails. A Weichmacher is some chemical agent softening up our plastic (plasticizer) and Weichspüler is the stuff you put into your ashing machine to make your blanket not just weichbut kuschelweich (cuddle-soft).You probably guessed it… it means fabric softener. And people have actually derived a verb from it.

The most important of all of them however is the… Weichei. Literally this means soft-egg and is a very common word for wussor pansyor wimp

All right. So these were the compounds. Now for some “real” words. For instance the noun die Weiche which of course means the … uhm… railway switch?! What? I…. I think my dictionary is broken. Yeah, there’s no other explanation. I’ll bring it to the dictionary-doctors first thing tomorrow. So let’s just ignore that and move on to the verbs.
The first one is einweichen and it means to put something into a liquid and let it become soft. Like bread in milk or beans in water.

WHAT? To dodge??? So, let me get this straight…

I mean… sure, we’re used to German prefix verbs being all abstract and crazy and stuff but this seems a bit too much even for them. Almost as if there are two independent words weich. So… I guess we’ll do a little trip into the past and find out about the history of the words.
Obviously, soft and weich are not related. Softis actually the English version of sanft and sacht, which we’ve already seen as translations for gently, softly, tenderly, and they all come from an old root that meant agreeable.
Weich on the other hand is apparently related to the English weak.
Hmm… I guess the old Germanic tribesmen and women must have been really bad-ass.

Man… they so would have laughed at me with my cuddle socks and my cuddle blanket sobbing at Armaged… oh crap… I didn’t mean to say that.
But seriously. Weich never really meant weak and weak never really meant weich. The two words just focused on different things. Their origin is the hyper ancient Indo European root *u̯eig which was at it’s core about bending, giving way.
This core is just what we need. If we say “going elsewhere” instead of giving way we have the key to those weird meanings. A rail switch does make a train go elsewhere. And if I want to dodge a snowball, I will jump aside (or bend). I will go out of it’s way…. ausweichen.
In fact, there’s actually a verb weichenwhich is nothing but a fancy version of to go away.

And what about soft? How does that fit in? Well… what is it that makes something soft soft? It’s the fact that it bends, it gives way. And by the way… this idea can even help us understand why weich is not often used o describe activities. I mean… I cannot whisper “way giving-ly”, right?
So… all weich-words actually do come from the same root. But there are two quite different strands. One about going elsewhere, the other about soft. So whenever you see a word with weich in it, it’s gonna be about one of those two ideas. Or both.
Actually…. let’s use the rest of the post to look at some of the important ones here. I’ll give you an example first without a translation so you can see if you can figure out the meaning by context. Sounds good? Cool.
But first let me add a few examples for ausweichen, because it’s actually a bit broader than to dodge.

There are a bunch of other words that are also about the idea of evading (vermeiden, umgehen, entgehen, ausströmen…) and it’s kind of hard to tell when to use which. Ausweichen is a conscious change of because there’s either an obstacle ahead (snow ball) or the path doesn’t go anywhere (original appointment). The two important structures are

All right.
The next one is just one letter difference to ausweichen. Aufweichen. Let’s see some examples…. it’s not … ahem… too hard to figure out ;)

I’m sure most of you got it correctly. Aufweichen is generally about softening up something and in the first sentence it actually literally means to weaken.

Ready for the next one? Here it is: abweichen.

And? Any idea?
Abweichen can actually have both meanings. The one in the second example is pretty much to soak off. The first one is about straying away from some sort of path. But unlike ausweichen, the focus is not on evading something but simply on the deviation.

The second one is by far more common and there are some related words like die Abweichung(the deviation) or abweichend (divergent, deviant, varying).
Now, I don’t know if you’ve noticed but we actually used two different ge-forms in the last two examples. Abgeweicht and abgewichen. And also, one uses sein, the other haben for the past tense. This works for all weichen-words. The ones that are about softwill be with –weicht… habeeingeweicht, aufgeweicht, abgeweicht. The ones that are about going elsewhere will be with wichen. And with sein because the focus is on a change of my location… bin ausgewichen, abgewichen, zurückgewichen (pull back)
All right. And I think that’s already it for today. Now you’re probably like “Wait a second… no inseparable prefixes?? No entweichenor verweichen or beweichen?”
Well, there actually are some. But I kinda sorta don’t want to talk about them here because that will *** *** ***part removed for spoiler protection reasons *** *** *** But I’m sure you’ll be able to deduce their meanings with what you’ve learned today.

So that’s it. That was our look at the German word weich. It comes from an old root that was about bending and giving way and it has split into two words pretty much. One is the actual weich which means soft. The other is the stem weich which is parts of a bunch of useful words that are roughly about going elsewhere.
If you have any questions or suggestions about weich just leave me a comment.
I hope you liked it and see you next time.