A fun look at the meaning of "wehren" and why a damn evolved into all kinds of words for fighting and defending. 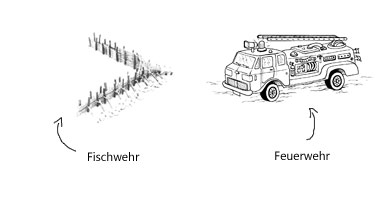 And let’s just start with a real life example… imagine, you’re having this home party, it’s great fun, and suddenly your cat walks in with that certain look on its face. And starts talking shit about you in front of all your friends.
And then it grabs a beer and pours it over your head. And then it drags you to the bathroom to wash off  the beer in the toilet. Cat is in bully mode and you REALLY need to wehren yourself or this will never stop.

What’s that you’re asking? If I am high? I don’t understand. My cat treats me like shit and now you’re implying it is my fault?! What does that even mean, high? I might have had a few couples of beer, yes. Just like any teacher at a language scho… oh man, what happened to this intro. I don’t know… sometimes the nonsense is so strong, I can’t resist.
Let’s just get started….

So wehren… what does it mean. Bully cat from above might have given you a … ahem… nudge in the right direction.
Wehren, or sich wehren to be precise, is about defending yourself, fighting back.

German also has the word verteidigen for to defend and there’s definitely an overlap with wehren. Like… would work in the examples with the politician and the gazelle. But there are a couple of differences. The main one is that wehren doesn’t if you want to defend something other than yourself.

Wehren really only works for yourself. Well, okay and in some rare occasions you can find it without anything in a general sense of fighting against.

And this brings us to the other difference to verteidigen – vibe. Wehren has a rather active notion to it. Just blocking or evading attacks isn’t really what you’d think of when you hear wehren. Wehren sounds like you take action. So it is kind of defending by fighting back. Don’t get me wrong… verteidigen doesn’t have to be super passive. As I said, there’s an overlap. Just keep this notion of fighting back as the core of wehren, rather than plain defense.

This notion of “active defense” is also kind of visible in the compounds with wehren and there are some really nice ones.

Oh and if you’ve watched a few world war 2 movies you might also know the word Wehrmacht, which was the name of the army of  Nazi Germany.
Now, when you see all these army related terms and you might be wondering if wehren is somehow related to English war.
Well, it’s not. War is related to German wirr, which is about confusion, chaos. But there is an English relative to wehren: the weir (das Wehr in German).   If you don’t know what that is…  a weir is kind of barrier you put in a river to alter or slow its flow or catch fish. The origin of the words is a root that was about protection, the same root that the word warn comes from.
And it’s likely that that root ties in with the root of worm or the German Wand (wall) – a root that was about winding. Winding branches into a fence. Wait, fence, defense… that makes sense :).

But you know what’s a REALLY  crazy connection? The word Bürger is related to wehren as well. Any idea how? No? Well, how about if I tell you that the German word for stronghold is die Burg. A Burg was under attack  quite often and the people defending it were called… “Burg-Wehrer”. Over time, this word broadened and was used for militias of towns and eventually der Bürger was used for anyone living in a city and later, the state. So the German word for citizen originally meant as much as defender of the keep.

But enough with the history stuff. Let’s get to the prefix versions. Because what would a verb be without without at least one prefix. Exactly: b.
…
Get it?… uhm… I did like a thing with the ver-prefix. Like… ver.. the prefix. Verb. What’s a verb witho… why are your faces so serious, gee, I’m trying okay. It’s not easy for me to be funny. I’m German.
So yeah, prefix versions.
There’s really only one that matters in daily life: abwehren. Abwehren is basically a successful fighting back, so it means to fend off. But as a noun it is also often used in a more general sense of defense, because Wehr by itself is really only used as weir.

Next up, we have verwehren and this one is about denying – in the sense of someone wanting something and you say no. So it’s the away-idea of ver- mixed with a rather weakened idea of defending. You “fend off the bid”, if you will. It’s not super common but you might see it newspapers.

And last but not least we have the noun das Gewehr. A few hundred years back it was a general word for stuff that you need to defend yourself. So it could be your sword but also your breast plate. But eventually, it was narrowed down to one specific weapon… the rifle.

And I think that’s it for today. This was our look at … wait, I hear the door… hello, who’s there?!?!… oh …. you…  I already gave you your dinner, what do you want… why are you looking at me like that… you think I’m scared? Well, I am, but I will stand tall you furry purry demon… I have a large glass full of water here… and I will use it, so you better back off…yeah, that’s right… out the door. Who’s the pussy now huh?
Yes, victory!!! So yeah, this was our look at sich wehren. As always, if you have questions or suggestions about this just leave me a comment. I hope you liked it and see you next time :).

By the way… if you’re a Game of Thrones fan then think about Weirwood Trees for a second. There’s definitely a notion of wehren to them.

sich wehren – defend oneself, fight back