Word of the Day – “wachsen”

A fun look at the meaning of "wachsen" and its prefix versions and a REALLY big difference between "wachsen and "to grow". Also: adults an ingrown toenails. 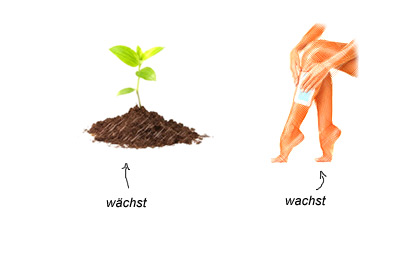 and welcome to our German Word of the Day. This time, with a look at the meaning of

And I’m not known to be one to beat around the bush, so I’m gonna te…
“Actually, Emanuel, on your show, you have beaten around the poor bush so much, there’s barely anything growing anymore.”
Oh yeah? Well, if you didn’t interrupt me all the time, I could get to the point much quicker.
“Uhm… we interrupted you ONCE.”
Your mom interrupted me once.
“Emanuel, your behavior is not very mature right now.”
Hmm, I guess. I waxed my armpits, by the way.
And if you’re now thinking “Too much information”, well then wait till you read the article.
There’s plenty more information in there ;).
So let’s take a look.

Wachsen is the German brother of the English word wax. Or actually, we should say of the English words wax. Because there are two that have nothing to do with each other.
The first wax is the stuff that bees produce.  The origin of this wax goes back thousands of years and the meaning hasn’t changed. The noun in German is das Wachs and the verb is wachsen.

This is what most of us think of when we hear the word wax.
But there’s another verb to wax in English. The origin of this one is the super ancient Indo-European root *aug, which is about the basic idea of “increase” and it’s the origin of words like augment, auxiliary, authority and – and this is kind of funny – the word waist.   Yup, the waist is called waist because it grows.
Now, in English, this wax got pushed to the sidelines by the word grow; which is  related to grass and green by the way. But German liked wachsen  and so it is the main translation for to grow.

Now, this last example is extremely frightening for Thomas. But for us it’s very interesting, because it highlights a VERY big difference between wachsen and to grow.
In English, a beard can grow, but you can also grow a beard. That does NOT work in German at all. You cannot wachsen anything. Wachsen is something the beard does by itself.
Cool.
Now, the noun for wachsen is das Wachstum (the growth) and it’s pretty straight forward so let’s move right over to the pref…  oh, hold on, we have a call. Paul from Glasgow, welcome to the show.
“Hello Emanuel,  I just wanted to ask how you’d actually say to grow something in German? Like… is it always wachsen lassen.”
Oh, great question. No, wachsen lassen only works if the focus is on not trimming. So mainly hair and nails.
“And what about growing plants?”
Oh, there the word is anbauen. Though that implies some sort of scale. But there’s also anpflanzen, züchten and ziehen.
“Jings, crivvens. So many words.”
Haha, yeah.
“Hey uhm… may I ask another question?”
Of course!
“So, what about that spelling. Like, why is chs pronounced like an x?”
Oh, well let me turn that around. Would you rather pronounce it with ch and then s? Like so…

“Uhmm…. x is fine.”
Haha, yeah, it’s really hard to do and the x is kind of a natural result of slurring chs.
“Yeah, that makes sense, thanks mate.”
No problem. Do you want to stick around for the prefix versions?
“Sure, why not.”
Cool.

First up, we have erwachsen and aufwachsen. Both are about growing up, but they’re not interchangeable.
Aufwachsen has a focus on the process of growing from a child to the age of adulthood.

Erwachsen as a verb is a very pompous sounding word for arise and it’s pretty rare.

And while we’re at it, for animals you’d say ausgewachsen. There, the focus is really that it has reached its final form, if you will :)

“Wow, I didn’t know they were so heavy.”
Yeah, it’s crazy right? And from what I’ve read, they drop it like every two years and then it grows back.
“Yeah, I read that, too.”
And speaking of growing back, that brings us right to the next verb – nachwachsen. Literally, it means  “to grow after” and it’s used in contexts of stuff re-growing, but the noun der Nachwuchs also carries the idea of the next generation.

“Wow, would not have thought that the combo chssch is actually possible.”
Haha, you’re right. I didn’t even notice. But hey,while we’re at it…  here’s another really vowel-heavy word:


“My God, so many consonants. “
Yeah, I’d kind of like to know how it feels to look at a word like that as a non-native speaker.
“It’s daunting, believe me.”
I bet. It’ll get easier over time though, when your brain learns to cluster stuff.
Anyways, the next verb I’d like to mention is durchwachsen.
Taken literally, it means something like “to grow through” but just like erwachsen it is pretty much only used as an adjective. And only in two rather specific contexts. The first one is meat marbled with fat. It is “grown through” by fat.

And for some reason, it is also used as a colloquial term for mediocre (or less). It’s not super common but it’s one of those words that will seriously impress your friends when you use it right.

“Wait, for what reason is it used in that sense again?”
Some. For some reason.
“Oh… uh… I see.”
Cool.
Now, there are several others but I think you can actually guess them from context so I don’t want to go over every single one.
I do want to mention the pair einwachsen and reinwachsen, though.
Both are about something growing into something, but einwachsen is pretty much only used for nails and hairs. For all other contexts, like growing into a role or a some piece of clothing, you’d use reinwachsen.

And then, I’d also like to mention zusammenwachsen. Not because it’s tricky to understand but because it a REALLY great example for how it can actually matter whether something is written together or separate. Zusammenwachsen as a prefix verb means a growing into one another. Zusammen wachsen mean that you each grow but you do it together, as a team.

“Wow, that’s kind of deep.”
Yeah, it’s from a post card.
Hey, I have a weird question though…”
Go ahead.
“So… what about if you and your partner wax together. Which version would that be?”
Hahahaha…  that would be zusammen wachsen. You see, on a very abstract level, the prefix of a prefix verb adds some notion of direction. So if we were to add zusammen as a prefix to the wax-wachsen, we’d get a verb that implies that we join two things by waxing them.
“Ahhhh, I think I get it. My understanding of prefix verbs has just gewachsen a little. Danke, mate!”
Well thank you for asking!! And thanks for joining me, it was great having you.
And to all you learners out there, thank you for tuning in, as well. This was our look at wachsen and its versions. I’ll add a few more to the vocab list, but I think they’ll make sense to you.
As always, if you have any questions or suggestions just leave me a comment.
I hope you liked it and see you next time.

aufwachsen – grow up (focus on growing and aging, usually for people)
ausgewachsen – fully grown (almost exclusively used as an adjective for animals)

überwachsen (adj) – grown over
über sich hinauswachsen – surpass oneself
verwachsen – grown together, grown in a weird way (usually used as an adjective)