Word of the Day – “verzeihen”

"verzeihen" is about forgiving. But what's the difference to "entschuldigen" and "vergeben"? And what does it have to do with saying no to chocolate. Find out. 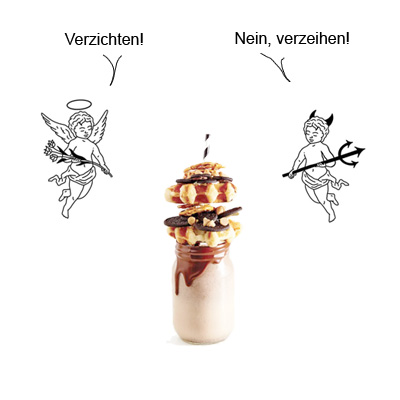 quick tag-on update from last time – I have realized that there is no realistic way for me to add my own audio to all my dictionary entries any time soon. I have audio for like 3500 but there’s more than double that missing and it would take me weeks to add those.

So I have decided to include speech synthesis for now.
It’s absolutely not ideal, but I hope it’s better than nothing :)

But now, welcome to our German Word of the Day!!
And this time with a look at the meaning of

And verzeihen one of those below-the-radar words, as I call them.
So it’s one of those words that you kind of never really consciously notice, but once you learn about it you’ll start seeing it regularly.
And it’s good to do some verzeihen regularly. It’s healthy for our soul.

Because verzeihen means to forgive.

Now some of you are probably like “Wait, I thought vergeben was to forgive.”
And that is correct, too.
But vergeben actually sounds a bit epic, and it’s not really a good fit for the small misdeeds of everyday life, like accidentally bumping into someone on the train or .. I don’t know… accidentally putting laxative into your coworker’s coffee.
vergeben is the proper word if we talk about real sins, like betrayal. Or laughing about Maria’s new hair, apparently. She REALLY didn’t take that very well. But come one… straight bumble perm curtain bangs with undercut ponytail… how do you even do that?!

Anyway, so verzeihen is about the mundane everyday stuff, vergeben about the big stuff. And the same goes for their respective nouns die Vergebung and die Verzeihung.

Actually, forgiveness sounds a little too strong in the second example and the better translation would probably just use to apologize.

And in fact, Verzeihung is pretty common in daily life in contexts of just a generic apology.

In examples like these, Verzeihung and Entschuldigung are the same and we could switch back and forth between them.
But it would be wrong to call them synonyms.
Take these examples, for instance…

In all of these, Verzeihung would be completely out of place.
And the reason is that there’s one very very crucial difference between Verzeihung and Entschuldigung:

Technically, the first one is asking for forgiveness, the second one is offering an apology. But in practice, the intent is the same and they feel the same.
But it’s important to keep in mind that the two have different “directions”, if you will.

Cool.
So now we know what verzeihen and Verzeihung mean and how to use them.

What we don’t know yet is WHY they actually mean what they mean.

The family of verzeihen

I’m sure many of you, especially those of you who are regular readers of Yourdailygerman, have correctly identified the ver-prefix in the beginning – everyone’s favorite prefix.
But zeihen… is that even a thing?
Well, it actually is. It’s an old and REALLY rare verb but it does still exist, and it means to accuse.

But the only place you’d hear that is on a theater stage maybe. No one talks like that in daily life anymore.

What’s more interesting here, though, is the broader family tree, which started with the unnecessarily ancient Indo-European root *deik-. This root carried the idea of showing, pointing out and besides zeihen and verzeihen, it’s also the origin of German zeigen (to show) and Zeichen (sign),  the English token, and the Latin branch around dicare with words like indicate, index or dictionary.

And the original meaning of verzeihen was actually a more general idea of denying something something. Like… you “indicate it away”, in a sense.
In law, this then started being used in the context of “renouncing” one’s claim and THAT’S how it eventually became the word for to forgive.

And this brings us right to one close relative of verzeihen, that I want to tell you about.

The meaning of “verzichten”

And verzichten is pretty much what verzeihen was a few hundred years ago. Taken literally, we can think of it as “indicating away”, with the away-idea of ver. And it is essentially is about renouncing something,  in the specific sense of saying no to something that you’re entitled to or that you’d like to have – be it suing your hairdresser for damages, or simply the free brownie that comes with the coffee at the new coffee place nearby.
The full phrase is verzichten auf with an Accustive, so that’s what you need if you want to connect whatever you’re “saying no” to. But you can also used it “bare” in a sense of “passing”.

Yeah… one thing I REALLY have a hard time verzichten auf are silly examples.
So Verzeihung, if they were extra silly this time :).

Anyway, that’s it for today.
This was our little look at verzeihen and verzichten. If you want a quick recap and check if you got the most important points, then you can take the little quiz below.
Let me know in the comments if you knew these before and also, if you start seeing them more now after you read about them.
And of course, if you have any questions or suggestions, leave those in the comments as well, and I’ll clear them all up as best I can.
I hope you had a good time today, have a great week and see you in the next one. Bye.