"unterstellen" is both, separable and non-separable. Today, we'll learn which will help you against rain and which is generally not nice. Also: runterstellen. 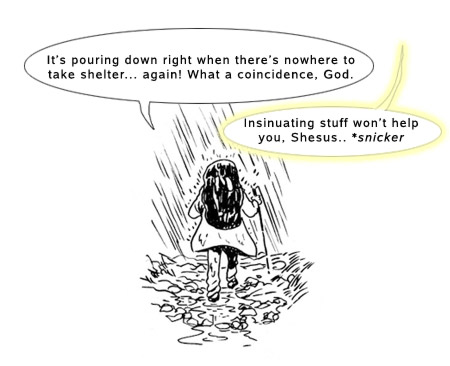 and welcome to another episode of Prefix Verbs Explained. Today’s verb will help you unfairly accuse people of stuff and take shelter from rain. Yup, I’d say that sounds just like the average meaning span of a German prefix verb :).
So let’s take a look at:

Stellen is to put. Well, actually stellen is a specific kind of putting and and there’s also setzen and legen but for today to put is good enough. You can also combine stellen with a self reference. Literally, that would be “to put oneself” and that’s used as to stand in sense of getting into the state of standing.

Now, let’s get to the prefix unter, the sister of under, and that is simple and not so simple.
What’s simple about it? Well, unlike many prefixes it can only add one notion to a verb: below-ness. And what’s not so simple? Well, unter doesn’t have two meanings, but it does have two grammars. Ugh. Unter is one of those that can be separable and inseparable.

Like all separable verbs it has the stress on the prefix. So it’s

In combination with a self reference, this is what you want to do if you’re outside and it starts pouring like crazy…

Though rain (or snow or hail) is pretty much the only context for this unterstellen, it’s definitely a useful word, at least in Germany because it rains a lot here. Especially last bummer .. I mean summer. Last summer was soooo rainy, it made me want to pack up my stuff and move elsewhere.
And that actually brings us right to the next meaning of unterstellen. Wow, what a transition.
So, if you want to travel for a while you might be faced with the question what to do with your stuff. Be it your furniture, or just some boxes with things that are precious to you, or your plants… what you could do is unterstellenthem at a friend’s place.
I guess, to park is a good translation. Parking some of your stuff in some location other than your home.

It’s not for small things like a DVD or a book, and not for living things like a cat. Well, okay I’ve seen examples where people use it for horses but I’d suppose that most of you won’t need that.
Hey, did someone just say suppose? Because what a coincidence – that leads us to the non-separable unterstellen. Damn, this transition workshop I went to last weekend was really worth the 10.000 dollars :).

It’s not immediately obvious but suppose is actually a literal translation for unterstellen. Sub(sup)is Latin for underand pose comes from the Latin word for to put. And just like suppose, unterstellen is neither for real things nor for real putting. But the meanings of the two are different. Suppose is about making assumptions. Unterstellen combines making assumptions with making accusations.
It’s range is from insinuation to direct accusation and unlike beschuldigen (to accuse), it has a vibe of unfair, unjust.

I hope you got some impression of how people use this verb.

Now, the non-separable unterstellenactually has a second meaning… putting under in context of chains of command or hierarchies. But you’ll most likely only see the ge-form of that.

Cool.
And now that we know what kinds of abstract things you can do with the idea of putting under, let’s now get to the verb that you need if you actually want to put something under something…

Unterstellen is one of those verbs where the r-version and the dr-version have a bit of a different focus. And that’s kind of cool because it’s actually good chance to learn (or review) something about the different focus of dr- and r- in general. Gotta love German.

German® – because even letters have a different focus.

R- has a focus on movement, change of location. Dr- is more about a fixed location. These notions are not super fixed and they don’t always come to bear. But in case of unter, they do. And not only in combination with a verb.

And these totally show in the verbs. Runterstellen is focused on putting something downward. That can be in the turbo literal sense of putting down an object but by far the more common use is in sense of “putting down” some sort of intensity.

Especially in context of computers (for lowering FPS, bit rate, brightness or other stuff) runterstellen is like THE word and I was surprised to see that it’s not listed in Dict.cc or Leo.org or Duden.
Now, would drunterstellen work in that context, too? The answer is a clear no, because drunter- implies that you literally put something under something and that wouldn’t make sense for a heater or the brightness of your screen.
Anyway, drunterstellen is used in context of putting something under something.

And I think that’s it for today. This was our look at unterstellen. Check out the fact sheet for a short overview and if you have any questions about all of the or the all that r-, dr-, dar-stuff just leave me a comment.
I hope you enjoyed it and see you next time.

Oh, by the way… the audio files for all posts that have audio can be downloaded as a zip-archive now. Click here for the archive for unterstellen

If you want to see all posts with audio, you can check out the category archive here. (I’ll add a link to the main page soon but for now the new archives are in beta)

Oh and one more thing… recently I’ve started wondering if the font is too small or not easy to read. Would you prefer the text to be a bit larger?? Let me know in the comments.

– to take shelter (from rain)
(sich unterstellen.. always with a self reference)
– to store (heavy) stuff somewhere (usually at a friend’s place)
(etwas unterstellen)