A fun look a the various meanings of "übergehen", the difference between the separable and not separable version and the words "rübergehen" and "drübergehen". 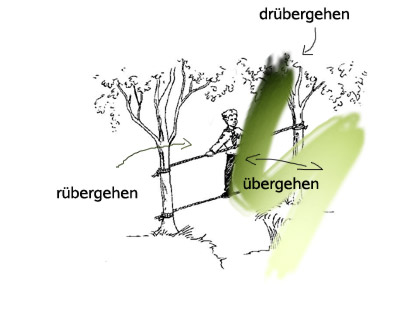 and welcome to another epic-sode of the epic series about German Prefix Verbs. What’s so epic about it?
Well, this is youspeaking German without knowing about prefix verbs, and
this is you is you after you mastered them. Yeah. Can’t wait. So let’s get right to it and have a look at the meaning of

Many prefixes have two quite distinct notions. Über, the German version of over, is easy on us in that it has only one. Or one and a half. It can express above-ness and across-ness andwhen you think about they’re closely connected. Across usually involves above. Just think of crossing a bride. You can’t do that when you’re under it. And speaking of crossing a bridge… we could also say going over a bridge. Hmmmm. Could that already be the meaning of übergehen???
Of course it is…
not!

It’s a prefix verb and prefix verbs are like scientific papers – they all have abstracts. Badumm tish.
Wow, that was bad.
Seriously though, the most logical, literal interpretation of a prefix verb is NOT gonna be a translation. It’s always some level of abstract involved. Anyways, so über only has one idea, but it is tricky on a different level. It can be both – separable and inseparable. And in case of übergehen we’re dealing with both.

The separable ÜBERgehen, with the typical stress on the prefix, is about crossing from A to B – in all kinds of abstract senses. A very good match is to transition which this is actually the exact same word. Transis Latin for over, acrossand the itioncomes from ire which meant to go.But to transition is not always a fitting translation because übergehen is super broad…

Quite a range of contexts, right? And there’s more because the verb is also used in sense of transitioning from one behavior to another, or changing habits or procedures.

The noun for the verb is der Übergang. It’s fairly often translated as the transition and unlike the verb, it’s sometimes also used for actual physical crossings… only if there’s walking

Then, there’s the pretty useful adverb übergangsweise which expresses the idea of for a transitional period

and there are few compounds like Übergangsjacke(between-seasons jacket), Übergangsfreund(in) (between-relationships relationship) or Übergangsfrisur which is a hairdo you get to for the not so funky transition period between short hair and long hair. Damn… there really is word for that :). But it’s not important and I think we could have ignored it. And speaking of ignoring, that is the perfect Übergang to the inseparable übergehen :)

The separable ÜBERgehen is about crossing with the focus being to get from A to B. The inseparable überGEHen, with the stress on the GEH instead of the prefix, is also about crossing. But here, the focus is NOT on getting from A to B – it’s about not “meeting” the thing you’re crossing. Of course we need to mix that with a pinch (or a pound) of abstract to get the real meaning. I think to pass over is the best translation but again it depends a bit on context.

This übergehen is mostly used in context of people and their wishes, it’s slightly formal sounding and is by far not as common as the other one so I’d say let’s put that on the passive pile and move on to something much more useful… the r-version.

As usual the r-version is the one that actually takes the combination of base-verb and prefix literally. Rübergehen isabout actually walking across something with the focus on getting from A to B. People use quite a but when it doesn’t really matter all that much what you’re crossing or if it is implied by context. You can see it a lot in context of streets but also in a more broad sense of walking over somewhere.

Cool. And what about drübergehen? Is it the same? Well, sort of. People do use them interchangeably in many contexts but there are some situations where drübergehen wouldn’t fit.

Unless there’s smoldering coal or something interesting to walk across, this sentence sounds wrong because drüber always needs something specific you’re crossing while rüber can be just about the A to B thing. Maybe we can put it this way…. drübergehen is going over it, while rübergehen can be just going/walking over.
By the way, a context where you’d rather use drübergehen is treating surfaces… painting, cleaning, coating, ironing and so on.

In these contexts the focus is really on the surface and not at all on getting from A to B and so h… beeep beeep beeep beeep… oh… haha… that’s actually the alarm of the Who-cares-o’meter. The apparatus has a point. I mean, it’s good to be aware that these kind of annoying nuances exist but you definitely DON’T need to worry about them when you want to speak.
The only thing you do need to keep in mind is the difference between the r-version and the base form, übergehen. Übergehen for abstract transitions, rübergehen for literal crossings. Oh and then there was a non-separable version but I don’t know where it is… oh wait, we put it on the passive pile, did we. Well, I’m too lazy to rübergehen there and get it. I’d much rather übergehen to drinking my Feierabendbier :).
So that’s it. This was our German Prefix Verb for the Day.
As always, if you have any questions or suggestions just leave me a comment.
I hope you enjoyed it, and see you next time.

Word for actual location: rübergehen
spoken past: sein + rübergegangen
phrasings:
zu/in rübergehen – go over there (the other side of the street as well as another room)
über etwas (Akk) rübergehen – crossing something (sounds redundant and tautological but Germans do that a lot when they talk about location)