Word of the Day – Wundertütenspecial #2

A fun look at two words that you definitely need on a flee market: trödeln and das Schnäppchen. We'll learn what they mean and see their cool backstory. 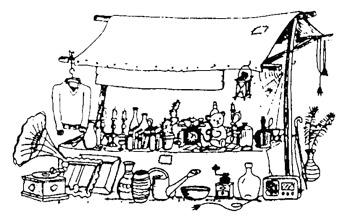 and welcome to our German Word of the Day. And this time it’s time for another so called Wundertüten-Special. A real Wundertüte is bag full of wonders…. well, actually more a bag full of stupid little stuff like gum and stickers. But kids love it and I think you might like the word-Wundertüte too. What is it exactly? It’s bag full of cool surprise words. You know.. these colloquial terms that you won’t get in the official study material. Their meanings are often quite specific but often they are really the only way to express a certain idea so people use them every day. Maybe every other day.  Okay, at least once a week. Well, definitely more than they use Birne which is part of many a beginners text books… unless… if they’re really big fans of pears they actually mig… okay, I’ll stop that now. The words in the last Wundertüten-special were definitely pretty cool so I’d say let’s open this one and find out. Sounds good? Awesome.

Trödeln comes from a quite interesting family. It is a variation of the German trudeln which has the very very narrow meaning of falling to the ground spinning. Like… dry leaves are “trudeling”. Or a bird that had a heart attack inmid flight. Now, this super hyper uber specific verb has a quite surprising relative in English … trend. Trend comes from a Germanic root that was about bending or turning in a certain direction. Like here:

And that’s totally the same as the other more common trend. Suppose ..there’s like this start up and they’re having their coffee break and then one guy suddenly goes like “Yeah… I don’t know about soy. I kinda dig almond milk though. That’s legit.” causing a series outbreak of FOMO across the office. And so they all turn, or should I say, trend toward almond milk, sucking California dry. Yeah, sorry hipsters but that’s what you do with that stupi… what? Oh you stopped learning German a year ago and you don’t read blogs to begin with? Well never mind then… back to trödeln.
So, the origin of it is a verb that describes how leaves fall… slowly spinning, turning left, turning right, sometimes even rising back up a bit. And trödeln itself … well, if you’ve ever seen a teacher or a child care worker desperately trying to get the kids to hurry up to cross the street or get on the bus, then you know what trödeln is. No, it’s not what the teacher does, it’s what the kids do… NOT hurrying up. Walking slowly, zigzagging around, stopping, walking back to their friends, starting a game of hopscotch in the middle of the road. That is what trödeln is.. to NOT hurry up on purpose (to dally, to dawdle).
It’s used a lot in context with kids and going somewhere but you can also trödeln at work (you shouldn’t) and you can even find the word in newspaper headlines about politics or economy.

Now, let’s say you’re a distressed mom or dad and you’re looking for tips how to deal with your kid’s dallying you might find something like this:

And you might be like  “What the hell?! As if these little brats need any help for that.” But this headline has nothing to do with not hurrying up. Trödeln actually has two meanings and the second one is…   to buy and sell things on a flea market. Yep, I am not kidding. Flea market is called Flohmarkt, but also Trödelmarkt.

So, here we are, having two completely different meanings for trödeln and the interesting question is whether they have anything to do with each other. Well… turns out, it is totally in the dark where the “flea market”-trödeln comes from, so science has no answer for us. Which is AWESOME because we can just make stuff up. I mean…  who needs research if he has   imagination.
So how about this one:  have you ever tried to pass over a flea market at normal walking speed? It’s impossible. Because people on flea markets usually walk… really slowly. They’re not in a hurry,  they’re trödeling. They are also turning to the stand on the left, turning to the stand on the right, going back two stands to the one with the lamp. They’re moving through the market like a dry leaf in the wind. Or if that isn’t connection enough how about this: Do you remember that trödeln is related to trend. Well, what can you get on a flea market?? Exactly, super hyper trendy stuff. Tadah. Another Schwarzbier please.
Seriously though, these connections are probably not historically accurate but I think they can help remember both the meanings in one go… and that’s a good deal. And that brings us right to our next word which stands for something pretty much all people like…

Some of the things you can buy on a Trödelmarkt are ridiculously overpriced. A dusty desk lamp for 90 Euro? Come on, pleeeeaaase.
But you can also make some real bargains there. And the German word for that is… das Schnäppchen.
Schnäppchen is part of a group of words that are all ultimately based on imitations of nasal sounds. And this group is surprisingly large. In English we have words like  sneeze, snout, snot, sniff, snuffle and probably a few more and in German we have schnauben (blow one’s nose), schnaufen (breathe heavily) or schniefen (to sniff) , der Schnupfen (sniffles, rhinitis) or  die Schnauze (snout, animal mouth). And there is der Schnabel and Schnabel is basically the mouth of a bird. Or is it a nose? How about nouth? Nobel Price please.
Seriously though… a Schnabel is  a bill, a beak or a pecker (what’s the difference there anyway) and, since Germans do seem to have a strange affection for bird metaphors, it is also used for our mouth…

By the way…  there is this wonderful German word schnabulieren, which means to eat.

Schnabulieren... I love it because it’s kind of a common man’s parody of all those fancy Latin and French scholar terms. It’s not all that common and some Germans might not even know it but it’s a great word.
Anyway, back to Schnabel. So a Schnabel is a beak and what the bird does to with it to catch an insect is closing it quickly. It snaps it closed. Do you see a connection already :)? The word to snap is also part of the whole sn-family and it is inspired by how a bird closes its beak. A super quick close, possibly with a little clacking sound. Now, over time to snap and it’s German brother  schnappen have changed and evolved into slightly different directions. But at least schnappen very much stayed true to the ideas of quickly closing and catching. Here are a few examples of how it is used today.

And I bet you already figured out Schnäppchen by now. It used to be just an affectionate form for something you’d grab or snag… and today it’s a bargain. A mint condition Batman comic book for 10 cents. That ugly orange lamp from that Swedish interior design magazine for 150 dollars. That full beam yacht for a million. Or Bear Sterns  for 1.2 billion. It doesn’t matter how big or what it is or whether you use informal or formal language… if it’s super good deal then it’s called Schnäppchen.
Examples.

So that’s Schnäppchen. Something that is such a good deal you try to  schnappen it. There’s not much more to say but there’s a song that’ll burn schnappen into your head once and for all. It’s a very deep, bitter sweet ballad about being young and coming of age in an ever changing world from the perspective  of – a metaphor, no doubt – a crocodile. There’s this one line toward the end that almost had me in tears.

The song was on number 1 of the German single charts for over 2 months and it was in the top 10 of a bunch of other countries like Denmark, France and  Sweden but also Australia and New Zealand. The single went double Platinum in Germany and has sold 1.7 million copies worldwide by now. The album … yes, I said  album … sold half a million. And if you feel like you need a Schnaps now… well, guess where that word comes from :).
And I think that’s it for today. This was our second Wundertütenspecial. We had trödeln and Schnäppchen but we learned quite a few other words along the way and I hope you found at least some of them useful.
As always, if you have any questions or suggestions just leave me a comment. I hope you liked it and see you next time.

trudeln – fall toward the earth while tumbling
trödeln – make slow on purpose
trödeln – sell stuff on a flea market
Trödelmarkt – flea market
der Schnabel – the beak, the bill
die Schnauze – the mouth of an animal (mainly used for dogs)
die Schnute – affectionate, yet not the least bit sexy term for mouth, used by mothers a lot
Halt den Schnabel – Shut up!
schnabulieren – joking affectionate term for to eat
schnappen – close very quickly, often inlcudes the idea catching, colloquial for to grab
das Schnäppchen – the bargain
das Schnäppschen – the small Schnaps
feilschen/handlen – to bargain (see if you can get a discount… not so common in Germany though)
der Marktstand – the market stand
die Standgebühr – the fee you have to pay for a stand
der Wochenmarkt – the farmers’ market